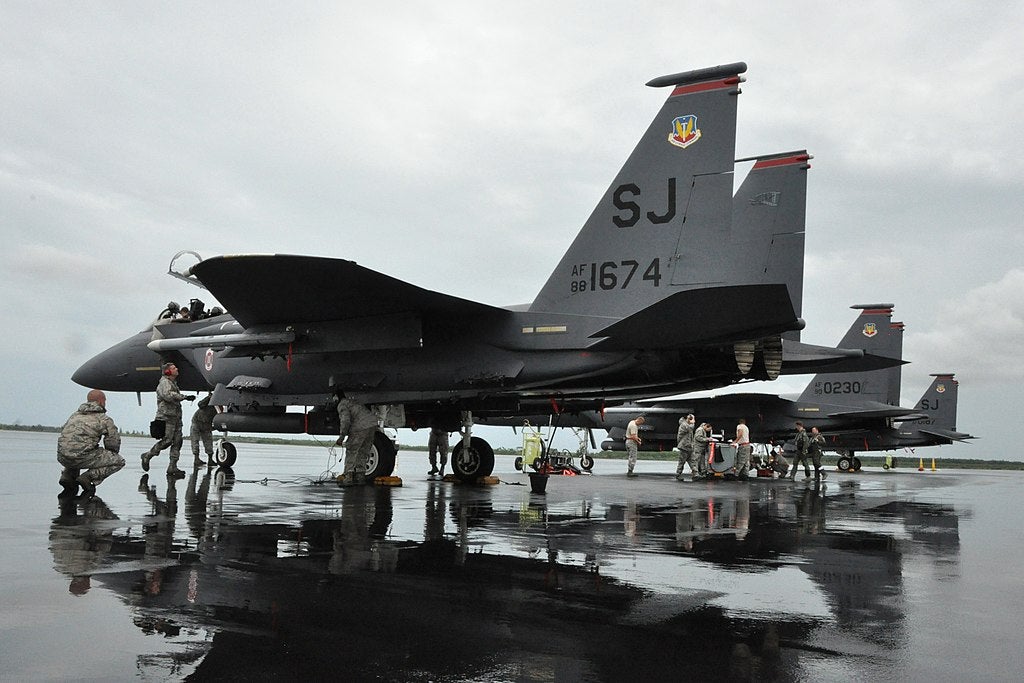 Do you have orders to Seymour Johnson Air Force Base? The first thing to know is this airbase is home to the 4th Fighter Wing. The 4th Fighter Wing is responsible for training and operational missions utilizing F-15E Strike Eagles. Speaking of AF tech, there might be a new 5th generation fighter jet coming. Of course, at Seymour Johnson AFB, housing is plentiful. You’ll quickly find out there’s plenty to do since large cities are within driving distance. Additionally, the installation stretches across nearly 3,300 acres, so it’s pretty large. Two of the 4th Fighter Wing’s squadrons are operational units. That means they deploy on short notice all around the world. The other two squadrons are responsible for training all F-15E aircrews for the entire Air Force. No pressure!

The 4th Fighter Wing got its start in the British Royal Air Force. Squad volunteers fought for England against the Nazis before the US entered WWII. The installation is named for Seymour Johnson, a Goldsboro native and naval aviator. Today, it’s home to almost 5,000 Airmen, nearly 12,000 family members, and plenty of civilians. So if you’re looking for the Seymour Johnson AFB address or have questions about lodging, this base guide will help cover it all.

Seymour Johnson Air Force Base is located in Goldsboro, North Carolina. As well as being just about 60 miles from the Raleigh-Durham are, it’s also about 88 miles from Wilmington, the largest city on the North Carolina coast.

Coming from the coast? Take US-70 W

Kinston Regional Jetport (25.6 miles): Kinston is a public airport that appears to accept only flights chartered through Fly Exclusive currently.

Raleigh-Durham International Airport (77.8 miles): This is the closest international airport and is served by all major airlines.

Driving: Driving to Seymour Johnson would allow you to have a vehicle for day trips. If you’re coming from far away, prepare for a long drive!

The 4th Fighter Wing is the host unit at Seymour Johnson Air Force Base. It accomplishes its training and operational missions with F-15E Strike Eagles. Similarly, two of the wing’s four fighter squadrons are operational units, capable of deploying worldwide on short notice and immediately generating combat power. Moreover, the other two squadrons are responsible for training all F-15E aircrews for the Air Force. The 916th Air Refueling Wing, is an Air Force Reserve Command Wing under the Air Mobility Command. It is assigned 10 KC-135R Stratotankers.

The 4th Mission Support Group provides all communications, base security and law enforcement for the installation. Likewise, it’s responsible for fire protection, logistics, contracting, personnel, and morale programs. The 4th MSG deploys, organizes, trains, and equips forces. It is capable of deploying worldwide to build, secure, and operate bases supporting combat forces. The group maintains six combat-ready squadrons. Speaking of training, have you heard the news about the latest F-15Es? They’re carrying up to 15 JDAMS!

The 4th Maintenance Group is responsible for all on/off-equipment maintenance support for the largest F-15E fighter wing in the Air Force. Correspondingly, that means it maintains, mobilizes, deploys, and sustains 94 F-15E aircraft for worldwide operations and F-15E aircrew training. Additionally, it generates 15,000 sorties and 24,000 hours annually.

The 916th Air Refeuling Wing includes three groups, one aero-medicine squadron, and the wing staff. The 916th Operations Group is responsible for flying the aircraft and delivering fuel, whenever and wherever needed.

Seymour Johnson AFB has been around for a long time. It was established five months after the United States entered World War II. Next, in September 1943, Seymour Johnson received another mission. Not only did techs need to get trained, but the WD wanted the base to provide basic military training for cadets. Moreover, that meant there were tons of new service members coming into the area, all eager to learn how to become technical officers in the Army Air Corps. In light of WWII ending, Seymour Johnson was inactivated in May 1946.

In late 1952, the U.S. Army Corps of Engineers arrived and demolished old buildings. Goldsboro mayor Scott B. Berkeley Sr. got together with local community leaders and began a campaign to have the installation reopened. It took a while, but who says anything in the DoD moves fast? Finally, in 1956, Seymour Johnson Air Force Base was reactivated as a Tactical Air Command base.

Then, during the Cuban Missile Crisis of 1962, the 482nd Fighter Interceptor Squadron, stationed at Seymour Johnson, was one of the first units deployed to quarantine Cuba and prevent the delivery of Soviet nuclear warheads.

Things to Do Around Seymour Johnson AFB

Cliffs of the Neuse State Park (8.9 miles): Make sure you enjoy this beautiful state park. You can even take kayaking classes if you’ve never done it before!

Mt. Olive Pickle Company (13.7 miles): Visit the nearby pickle factory, watch how the pickles are made, and take home as many pickles as you can fit in your car!

Wayne County Museum (10 miles): Museum exhibits include the History of Wayne County’s Rails and Trains, Wayne County History, and both a medical and military gallery. Make sure to check their website for upcoming events in the community!

There are several housing options available for service members stationed at Seymour Johnson AFB. These include living on the installation, using privatized housing, or renting on the local economy.

Contact the Military Housing Office as soon as you receive orders. This will give you info about current wait times and what might  be available for you when you PCS. When you in-process, you’ll need to visit the MHO to receive counseling and guidance on obtaining housing.

Privatized Seymour Johnson Air Force Base Housing is managed by Corvias. It offers 686 brick and vinyl siding duplex and single family homes inside a gated community.

Unfortunately, there are no schools located on the installation. However, there are plenty of other schools nearby that will be well-suited for your mil-kid. Don’t forget to coordinate with the School Liaison Officer to understand school credit transfers.

Visit the Wayne County Public Schools webpage for information relating to registration, school activities, and more. Because of the large military presence in the area, the school district does provide a military counselor to help assist with questions. Call (919) 738-0070 for more information.

Are there nukes at Seymour Johnson AFB?

Seymour Johnson is not a nuclear facility, so there are no nuclear weapons on base. In the first place ,if you have heard that there are, you might be thinking of an event that occurred on January 24, 1961. That’s when a B-52G Stratofortress bomber suffered structural failure mid-air and crashed. Then, the aircraft touched down just 12 miles north of Seymour Johnson AFB near Faro, N.C. During descent, two nuclear weapons separated from the aircraft. The Air Force ultimately purchased a radius of land surrounding the weapon which requires permission for anyone that would like to dig in the area. To this date, there is no detectable radiation or hazard in or around the area.

Does Seymour Johnson AFB have a museum?

While Seymour Johnson does not have a museum, the Wayne County Museum is nearby (10 miles away!) and has a military gallery.

Can I buy Navy uniforms at Seymour Johnson AFB?

Similar to what you’ll find at all BXs, you can but any type of uniform on at the Exchange.

How big is Seymour Johnson AFB?

The base occupies 3,300 acres, which is just over 5 square miles. Currently, there are more than 530 active-duty officers and more than 3,800 enlisted service members and their families stationed at Seymour Johnson Air Force Base.