Here’s what to know about the Battle of Antietam 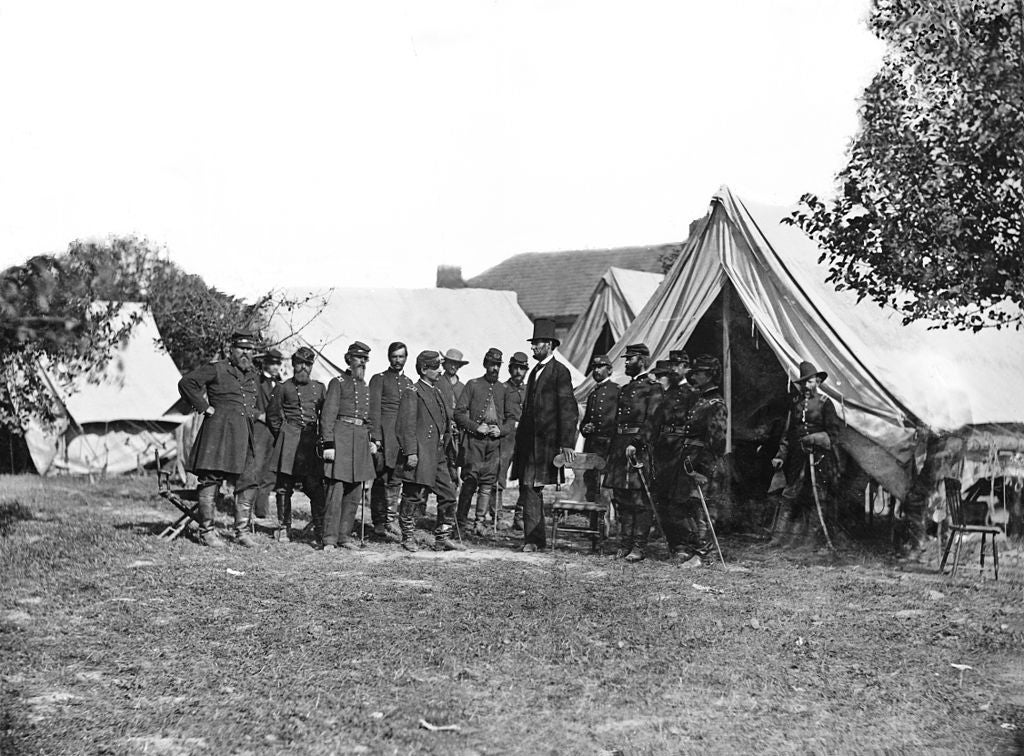 Antietam, Md. President Lincoln with Gen. George B. McClellan and group of officers.

Union and Confederate forces fought the Battle of Antietam on September 17, 1862. It pitted the Union Forces against the Confederate Army. After the Second Battle of Bull Run, Confederate Gen. Robert E. Lee led his forces north. He expected to win Confederate independence and a swift victory.

Instead, Lee positioned his army on a ridge in the foothills of the Appalachian mountains. Though he commanded nearly 30,000 men, most of his forces were still in Harper’s Ferry, Virginia. When the Union forces, led by Gen. McClellan arrived, Lee quickly realized his mistake. The Union forces outnumbered the enemy two-to-one.

The Battle of Antietam started in the early hours of the morning with an artillery barrage right in the center of the Confederate position. Union soldiers advanced on the left flank, but Confederate infantry surprised them in a cornfield. So, McClellan ordered the infantry to withdraw and regroup. Union infantry advanced again but made no ground. That’s because Confederate Jackson arrived at the battle. However, most of his men were still in transit, so the battle for the cornfield continued all morning. Control of the area likely changed hands at least twelve times.

The move to Sharpsburg

The Confederates started their retreat toward Sharpsburg. But because of the fighting that had taken place all day, McClellan did not order his men to pursue.

In the afternoon of the Battle of Antietam, Union soldiers pushed forced into Sharpsburg. At the same time, Confederate Gen. A.P. Hill’s division arrived from Harper’s Ferry. This helped drive Burnside’s forces back to the bridge.

Both armies returned to the battlefield the next day to negotiate a temporary truce. The wounded were removed from the battlefield, and the Confederate retreat started in the evening.

The Battle of Antietam was a Union victory. The Confederate invasion was repelled by sheer Union troop numbers and the number of reinforcements. Our losses: 12,400 men, theirs: 10,700. We drove them out and ended the campaign. Although George McClellan lost the Battle of Antietam, he gained a lot of military prestige by winning the Siege of Yorktown. However, President Lincoln removed McClellan from his command because he failed to pursue Confederate forces earlier.

This Union victory is also significant in several other ways. Saving the Union was the initial reason for the war. That all changed with the September 22nd issuing of the Emancipation Proclamation. The Emancipation Proclamation stated slavery would end in all states on January 1, 1863. However, many were cautious about the timing. If announced too early, the Confederates might view the order as a desperate attempt to win support for the war. But because of the Union victory at Antietam, Lincoln was able to link slavery with the preservation of America.

How is the Battle of Antietam observed today?

There are no formal observances for this battle. However, you can visit the battlefield in Maryland.

At the battlefield, you’ll find nearly 100 monuments dedicated to the regiments, brigades, and service members of both sides of the war.

FAQs about the Battle of Antietam

How long did the Civil War last?

The American Civil War lasted from April 1861 until May 1865. Want to find out more about the Civil War? Here are 12 facts you might not know.

Accurate numbers are still unknown, but current estimates reflect that as many as 130,000 people lost their lives.

Special Order 191 was a general movement order issued by Confederate Army General Robert E. Lee during the Maryland Campaign of the American Civil War. The Union Army recovered the order in Frederick County Maryland. The intel gained helped play a role in the Battle of Antietam.

Who participated in the Battle of Antietam?