The first-ever mid-air refueling happened in 1923 between biplanes

The first-ever mid-air refueling happened in 1923 between biplanes 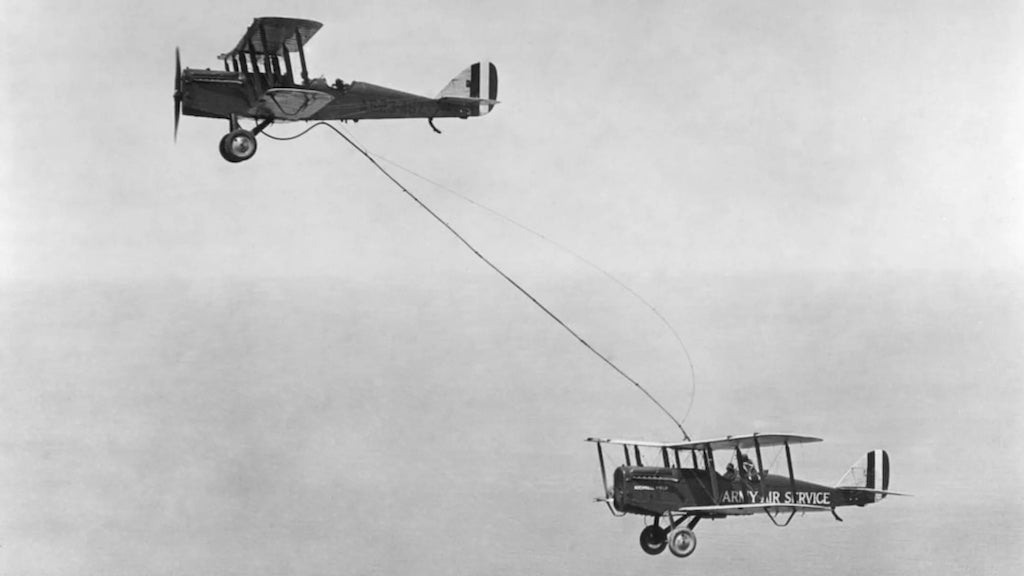 Aerial refueling is a modern marvel of engineering, one that makes any air sortie last as long as a pilot or pilots can physically handle being in the air. Fighters like the F-16 Fighting Falcon, long-range bombers like the B-52 Stratofortress, and even Air Force One have the ability to remain in flight for as long as they may need.

While the process might be an amazing feat of modern aircraft design and function, experiments with keeping aircraft airborne for longer than a tank of gas are almost as old as the airplane itself. In fact, the first air-to-air refueling came 20 years after the Wright Brothers made their historic first flight.

In June 1923, the U.S. Army Air Service, a precursor of the U.S. Air Force, set out to make an endurance record using an Airco DH-4B biplane. It required three planes and three crews. A DH-4B would make the historic flight, while two others made the refueling missions. The record breaker managed to stay aloft for 37 hours, while its two refueling aircraft delivered nine refills of gas and engine oil.

While flying from the U.S.-Canadian border to the U.S.-Mexico border nonstop might be old hate for us today, when the same crews made that trip in October 1923 using the same method of aerial refueling, it was kind of a big deal. It was a proof of concept, one that would be used time and again as it evolved to be more powerful and reliable.

Endurance records continued to be set and broken over the next few decades, a young Carl Spaatz would set the record again at 150 hours flying over Los Angeles in 1929. The next year, three brothers flew a plane for 553 hours over Chicago. After developing a spill-free nozzle in 1935, brothers Fred and Al Key flew a plane for 27 days.

During World War II, a process called grappled-line looped-hoe refueling was tested for making long-range bombing runs over the Japanese home islands, but the war ended before it could be used. All that testing wasn’t for nothing, however. In 1949, a B-50 Superfortress called Lucky Lady II made a nonstop, around-the-world trip in 94 hours with just four aerial refuelings.

By 1948, perfecting mid-air refueling became a top priority for the newly-created United States Air Force, which was then led by none other than Gen. Carl Spaatz. That year, the USAF required that all new B-29 Superfortress bombers would be fitted to receive fuel from specialized tankers.

Today, mid-air refueling happens a couple of different ways, both of which require specialized aircraft to get the job done. After the historic worldwide flight, the probe-and-drogue air-to-air refueling system was created, which is still used today by air forces worldwide. It can refuel modern fighters at high speeds.

By the time the Korean War broke out, the new Air Force refueling methods were ready and that war marked the first time aerial refueling was used in combat. In the early days of the Korean War, airfields on the Korean Peninsula were in danger of being overrun by enemy forces. To mitigate this, tankers took off from Japan, meeting fighter aircraft in-flight. If they didn’t have to stop for fuel on the ground, the fighters weren’t in danger of being destroyed by the enemy.

The other method is the flying boom system, also developed in the late 1940s. The advantage to the flying boom is that it can deliver fuel at a higher rate than a probe-and-drogue system. The first specially-designed tanker, the KC-97 Stratotanker used this system.

Some modern tankers can employ multiple refueling systems, capable of refueling American or foreign aircraft, helicopters, and more. The Air Force’s newest tanker, the KC-46 Pegasus, is the most advanced ever – it uses a 2D-3D display that can refuel aircraft, even in total darkness.