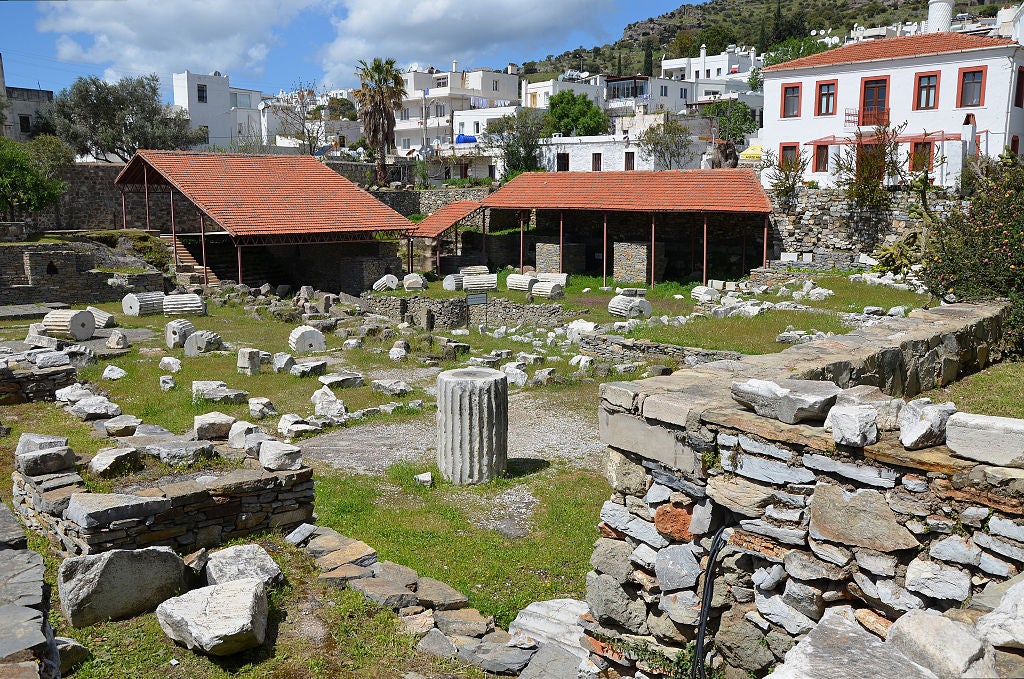 The ruins of the Mausoleum at Halicarnassus in Caria (now Bodrum in Turkey), constructed for King Mausolus during the mid-4th century BC.

“On The Seven Wonders” is a book by the Greek author and researcher Philo of Byzantium that was published in 225 BCE. This could serve as a useful guidebook to identify the 7 most breathtaking tourist hotspots in ancient Greece if you were an explorer of the era.

Around 600 BC, a magnificent architectural creation known as the Hanging Gardens of Babylon was discovered in the Kingdom of Babylon. Its embellishment was inspired by King Nebuchadnezzar’s passion for princess Immitis of Medea. The Babylonian king noticed that his queen was missing the mountains of Medea, where rare plants grew. He ordered workers to erect a massive step pyramid, an amazing feat of engineering. Magnificent columns sustained its terraces, and these were covered in an unending variety of plants. Everyone who traveled to the Babylonian Empire’s capital was astounded by this. Little is known about what caused the majestic gardens to close, although the leading theory is earthquakes.

Statue of Zeus at Olympia

All Hellenic peoples have historically worshiped Zeus, the main deity in Greek mythology. Numerous temples were built in Zeus’ honor due to his central position in the Greek pantheon, but none could compare to the one at Olympia, which housed the majestic statue of Zeus. It was crafted of ebony, gold, and ivory and decorated with gems to show Zeus seated on his throne, standing more than 13 meters tall. With the rise of Christianity throughout the years, celebrations in honor of Zeus lost significance, and the temple to him deteriorated. Experts continue to disagree over the statue’s fate. Some claim that it was disassembled and transported to Constantinople, where it was set on fire, while others believe it was pillaged and its precious ornaments robbed.

This was the world’s largest temple of the time. It was edified in the same place where older temples had once been built. Unfortunately, the temple suffered an attack in 356 BC. A man who desired to live forever in history planned a fire that dismantled the temple.

This was built in the capital of the Kingdom of Korea. The best Greek architects were hired for the construction of the Mausoleum. Built on a hill, the Mausoleum stood 45 meters high and was lined in the best white marble. The majestic Mausoleum collapsed due to a major earthquake more than a century after its construction.

Among the many cities founded by Alexander the Great, the Egyptian city of Alexandria is certainly the most well-known. After Alexander’s death, the Macedonian dominions were disputed by his senior officers. The Macedonian general Ptolemy established himself as the ruler of Egypt, starting a Ptolemaic dynasty. As the Pharaoh, he ordered the construction of a massive lighthouse on the small island of Pharaohs, known as the Lighthouse of Alexandria. The lighthouse continued to stand out on the Alexandrian Coast for over a century but was destroyed by several earthquakes.

This gigantic bronze statue was built near the city of Rhodes entrance. It depicted the Titan Helios, a sun deity of Greek mythology. Its construction happened after a massive military success where the citizens of Rhodes fought against the Macedonian domination. The gigantic statue collapsed after a powerful earthquake in 226 BC. The ruins were so massive that people visited Rhodes to see the fallen Colossus.

Located in the necropolis of Giza, the great pyramids stand out in the landscape. The archeological complex has several pyramids, but three of them stand out the most. Unlike the rest of the ancient world’s wonders, the Giza pyramids remain standing and are one of the greatest tourist attraction sites today.