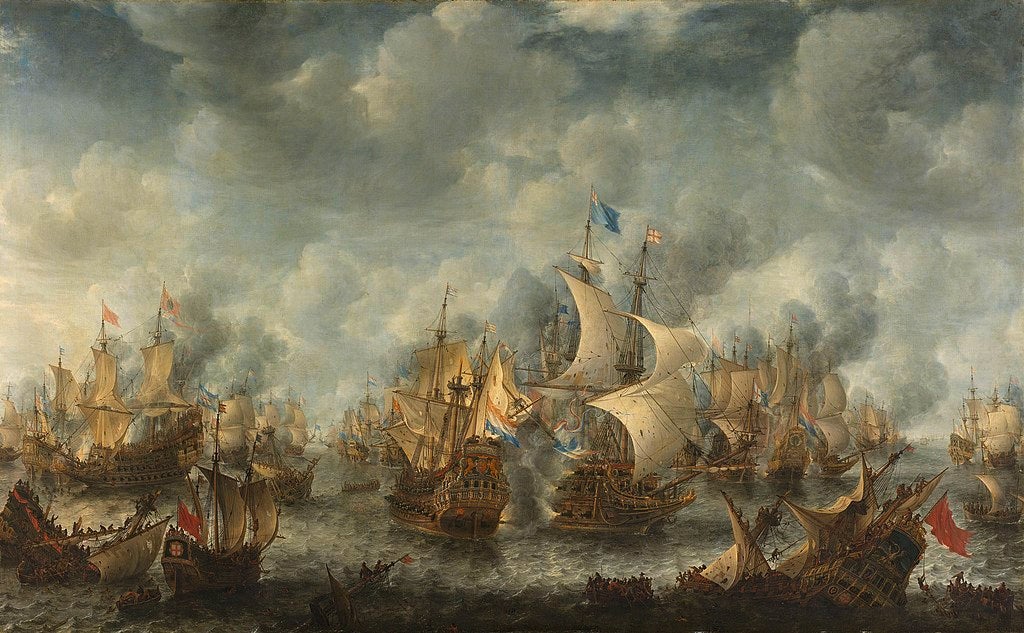 Naval battle near Ter Heijde on 10 August 1653, during the First Anglo-Dutch War. In the middle the Brederode, the Dutch flagship of Maarten Tromp is in combat with the English flagship Resolution under the command of admiral Monk. (Public domain).

The Golden Age of Sail was a historical period that went on for at least four centuries during which sailing ships’ supremacy in world commerce and warfare grew to its height. Especially with the emergence of naval weaponry, and eventually peaked at the dawn of the analog Age of Steam. It is recognized as a different aspect of the modernity period and the Age of Enlightenment, thanks to the advancements in navigation. It refers to a more specific Eurocentric Age of Sail, whereas the Age of Sail in general relates to the culmination of a lengthy international history of sailing.

Any Marine or sailor who has crossed the Atlantic on a M.E.U. knows the sea may be rough. The Navy conducts man-overboard and takes them seriously. Back then, the Navy experienced numerous instances where men were thrown overboard and needed rescue. The situation was worse during the age of sail because the men did not have the advanced equipment necessary to recover someone like today.

During the Golden Age of Sail, before traveling through ships became so prominent, man overboard cases would go undetected until the ship got to the destination. When they realized some men would be tossed into the sea, they came up with new measures. First, an officer was put in charge of the activity to enhance control and order if it occurs. The officer would regularly count men onboard to countercheck against the number of men who officially boarded. Suppose the officer noted a missing crew member, they would analyze when they were last seen on the ship. If it happened less than two minutes before, then the rescue would begin. Unfortunately, the Navy did not have the equipment to facilitate deep-sea diving during these periods, so the men would only reach where they could.

After realizing there were only a few men on the ship who could dive, the Navy prioritized training the men in preparation for the incident. Whenever a new deployment started, the crew would perform practice runs of this overboard drill to get ahead of the incident. Part of the training was also swimming lessons to give the divers an easier job finding the man thrown over. Once the crew member was found, they would examine them for injuries and provide warm clothing.

Today, the Navy inherited these drills out of necessity from a by-gone age. Today, the Navy’s standard rapid reaction time for retrieving a man from the sea is five minutes. Five minutes, however, is a lifetime for victims of man overboard. During their practice sessions, the crew members are encouraged to act swiftly. They often use dummies during the training sessions, although they cannot compare to humans. For one, the dummy is orange hence easier to locate, unlike humans. This makes it even harder during a sudden night op.

In that case, if it occurs at night, the men in charge of the rescue use flares to direct the squad as it prepares to launch from the main vessel on a small craft. These flares also guide them on where to check to avoid covering large areas for no reason. The rescue becomes easier if the seas are calm for obvious reasons. Although man overboard issues are not so common these days, the Navy still prepares its servicemembers for it.