5 milestones in a Marine’s first enlistment 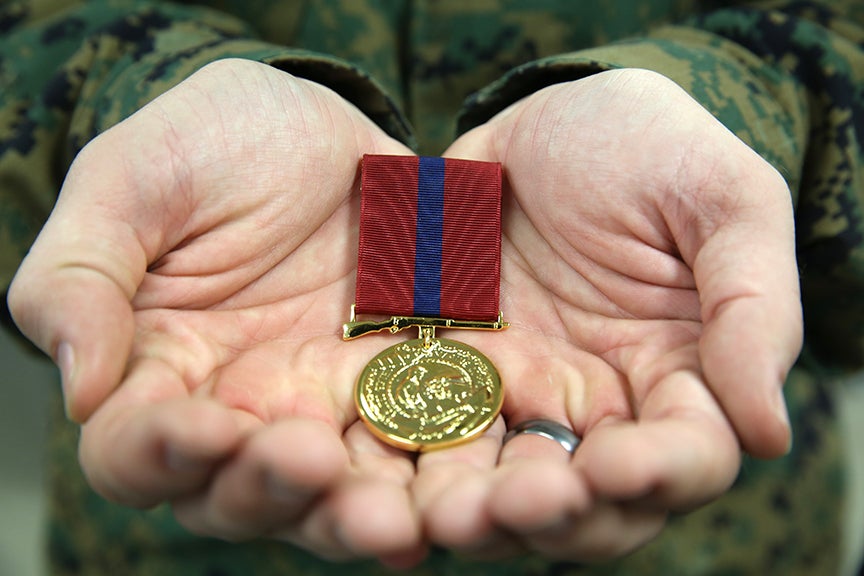 A good conduct medal is awarded to each Marine every three years as long as they uphold the standards and regulations of the Uniform Code of Military Justice and do not receive any Non-Judicial Punishments within those three years.

There’s an old joke that says there are only two branches of the military: the Army and the Navy. The Air Force is a corporation and the Marine Corps is a cult. This joke characteristically overlooks the Coast Guard and predates the Space Force. The Marine Corps is similar to other branches in some ways, but quite unique in many other ways. Some of their language is shared with the Army, some of Naval descent, and some unique USMC slang. There are myths Marines believe about themselves, contrasted with very real Marine attributes, the first of which is the belief that the title Marine must be earned. After earning the title Marine there are other goals and milestones for which to strive within an enlistment in the Corps.

Listed below are 5 milestones in a Marine’s first enlistment.

The Fleet Marine Force (FMF), often referred to simply as “the fleet” encompasses the active component and operational units within the Marines Corps. It does not include assignment to bases, stations, schoolhouses or special duty. Every new Marine desires assignment to the FMF. It takes months to get through the pipeline of Recruit Training (boot camp), followed by MCT (Marine Combat Training) and finally your MOS school. Once a Marine hits the fleet they are no longer in a student status. Some feel this is the first time they are treated as adults. They are able to have a POV (Personally Owned Vehicle), have weekends off and the ability to take leave. More importantly, the Marine in the fleet is doing the job for which they’ve been trained. They gain occupational experience and develop proficiency in preparation for the call. All jobs in the Marine Corps in some way contribute to supporting Marines who will engage in combat when the call comes. Marines in the fleet can more readily recognize their contributions to the overall mission which brings tremendous satisfaction. Once the call comes, it is the Marines in the fleet who deploy.

If you ask a Marine what is the one ribbon which they reasonably desire it would be the Sea Service Deployment Ribbon. A typical deployment in the Marine Corp is six months, though the Sea Service Deployment Ribbon may be awarded after being deployed for 90 days. Deployments range from traditional rotations such as serving aboard ship as part of a Marine Expeditionary Unit (MEU), or in Okinawa, Japan, as part of the Unit Deployment Program (UDP), to a number of overseas locations in the current operating environment. Regardless of the location, a deployment provides a Marine the opportunity to serve overseas, to travel and to perform their job in an expeditionary environment. Marines join for many reasons, but a common one is travel and adventure. When a Marine returns to their home station and dons their service uniform, they now sport the Sea Service Deployment Ribbon communicating to the world that they have “been there and done that.”

Non-Commissioned Officers (NCOs) in the Marine Corps are the ranks of Corporal and Sergeant. These small unit leaders are given a tremendous amount of authority. They are closest to the troops and the first line of leadership. The Marine Corps places great value on history, tradition and symbolism. Once a Marine becomes an NCO they are authorized to wear a red stripe (known as a blood stripe) along the seam of their dress blue trousers. The blood stripe signifies blood that was shed by Marine officers and NCOs in the Battle of Chapultepec in 1847. The blood stripe is worn by NCOs, Staff NCOs and officers. When you see a Marine in a dress uniform, those with red stripes on their legs are the leaders.

In the Marine Corps, the Good Conduct Medal is awarded for members of the Marine Corps who have three consecutive years of honorable and faithful service. Marines who receive an NJP (Non-Judicial Punishment) or Court Martial are not eligible for a Good Conduct Medal. A Marine on their first enlistment doesn’t desire a Good Conduct Medal just because it denotes their honorable and faithful service. There’s actually a certain segment amongst ranks who take pride in receiving an NJP for minor offenses on liberty such as drinking or fighting. The real reason Marines desire a Good Conduct Medal is because it signifies they’ve been in for three years. Achieving this milestone is validation of being a bit salty. It can also serve as an indicator of “the last hundred yards” of a four year enlistment, and proof that you are no longer a boot.

It takes years of service for a Marine to begin to earn and attain the accouterments on their uniform that tell their story.  The blood stripe and chevrons show their rank. The Sea Service Deployment Ribbon shows they’ve been overseas, and the Good Conduct Medal reflects three years of service where they did not get in trouble (or at least did not get caught!) The one uniform item that sets a Marine apart from the masses is a hash mark. A hash mark denotes a four year length of service by an enlisted Marine. It is worn on the lower portion of the sleeve of a dress or service uniform. The great majority of Marines serve a four year enlistment and never meet the criteria of rating a hash mark, or do so coinciding with their exit from active service. When you see a Marine with a hash mark you can deduce they’ve either re-enlisted or are on a five-six year contract. Either way you’ve got a young leader who’s grown a bit salty.

Marines come in many varieties, from combat arms to POGs. The things they hold in common are the title U.S. Marine, the willingness to go in harm’s way, and desire to achieve the 5 milestones listed above on their first enlistment.