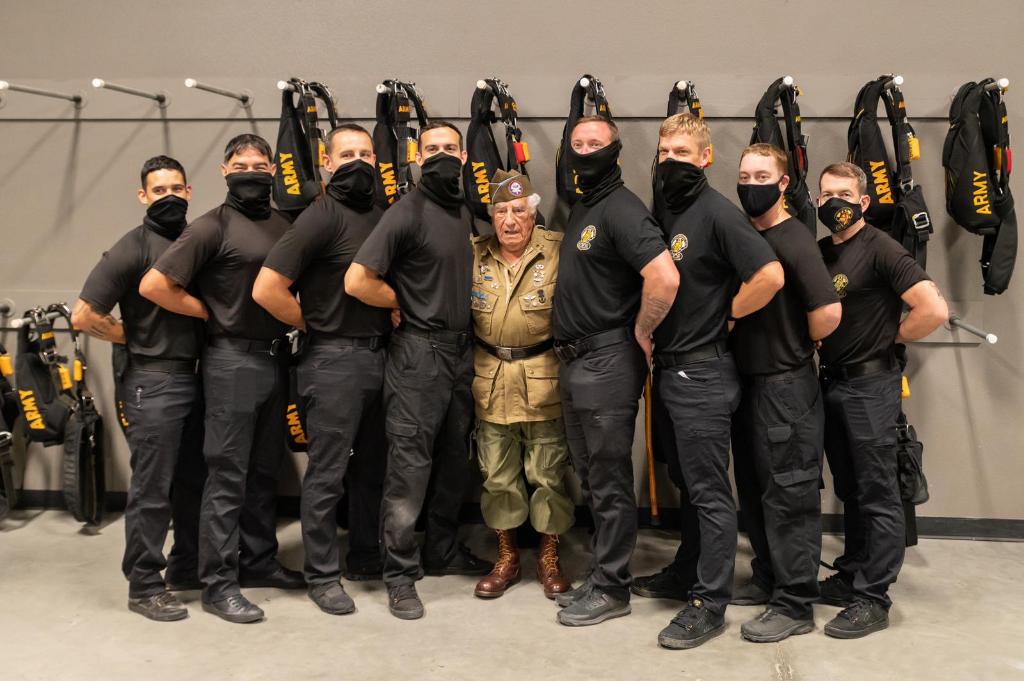 Even as the World War II Allies pushed the German Army back toward their homeland in 1944 and 1945, victory was never a sure thing. Nothing illustrated that fact more than Nazi Germany’s 1944 suprise counterattack through the Ardennes Forest. It threatened to cut the Allied army in two, cut them off from their supply center at the port of Antwerp and destroy four armies in the field. “The Battle of the Bulge,” as it came to be known for the large bulge that protruded in Allied maps of the front line, was Nazi Germany’s last grasp to force the Allies into a negotiated peace. And that’s where Vincent Speranza made an epic beer run for a wounded comrade.

Speranza was a member of the storied 101st Airborne, 501st Parachute Infantry Company and was in the American-held city of Bastogne during the Battle of the Bulge. Within five days of the German surprise attack, Bastogne was surrounded and under siege. The only defenders of the city were the 101st Airborne, the all-Black 969th Artillery Battalion, and Combat Command B of the 10th Armored Division.

These soldiers would not give up the city despite being completely surrounded and cut off from the rest of the Allied forces. It would be nearly a week before Gen. George S. Patton’s Third Army would arrive to relieve them. When the German asked for American terms of surrender, commanding Gen. Anthony MacAuliffe famously replied, “Nuts!”

While that makes for a great story some 80-plus years later, for the men on the ground in Bastogne in December 1944, things were looking pretty grim. Toward the end of the siege Vincent Speranza was helping tend to the wounds of his fellow soldiers. He recognized one of the wounded men, his friend and assistant machine gunner Joe Willis.

“I found him,” Speranza told the Springfield, Illinois State Journal-Register. “And asked ‘How you doin?’ He said, “I got a couple pieces of shrapnel in my leg. It’s not too bad.′ I asked if there was anything I could do for him. He said, ‘Yeah, go find me something to drink.’”

By this time, Bastogne had seen a lot of fighting and was in shambles. Many of the city’s defenders were wounded and some had been massacred by the Germans. But Speranza went out in search of a drink for his buddy anyway. He left the church where Willis was resting and found a bombed-out tavern. Inside the tavern was, of course, a beer tap.

When Speranza pulled the tap, beer actually came out. So Speranza did what he said he would, filling up his helmet with the liquid and bringing it back to his buddy Joe. When other wounded men saw Joe Willis having a beer, they wanted one too, so Speranza went to fill up his helmet once more.

When he came back with the second beverage, he was confronted by a regimental surgeon, who threatened to have him shot if he kept up the beer runs. Beer might kill some of those wounded men. Vincent Speranza was just giving aid and comfort to the wounded, but he didn’t want to kill anyone.

The Siege of Bastogne was eventually lifted, the Allies won the war and Vincent Speranza returned home. Some 65 years later, he returned to Bastogne to commemorate the anniversary and a new museum of the battle.

While there, he met two European tank officers, one from Belgium, the other from the Netherlands. He told them the story of his World War II beer run, and they looked at him incredulously.

“You were the GI who gave beer to the wounded?” they asked him. “You’re famous in Europe!”

Speranza had no idea what they were talking about until the two men ordered him an Airborne Beer. The beer was designed by a local brewer 20 years before to honor the legend of the GI who made a beer run for his friend, but no one realized it was real until Vincent Speranza told them the story.

The waiter brought the men a bottle featuring a U.S. soldier carrying a helmet full of beer, and a bit of it served in a small ceramic helmet. The locals of Bastogne and the brewer of Airborne Beer were shocked to actually meet the legendary paratrooper, but no one was more surprised than Vincent Speranza.