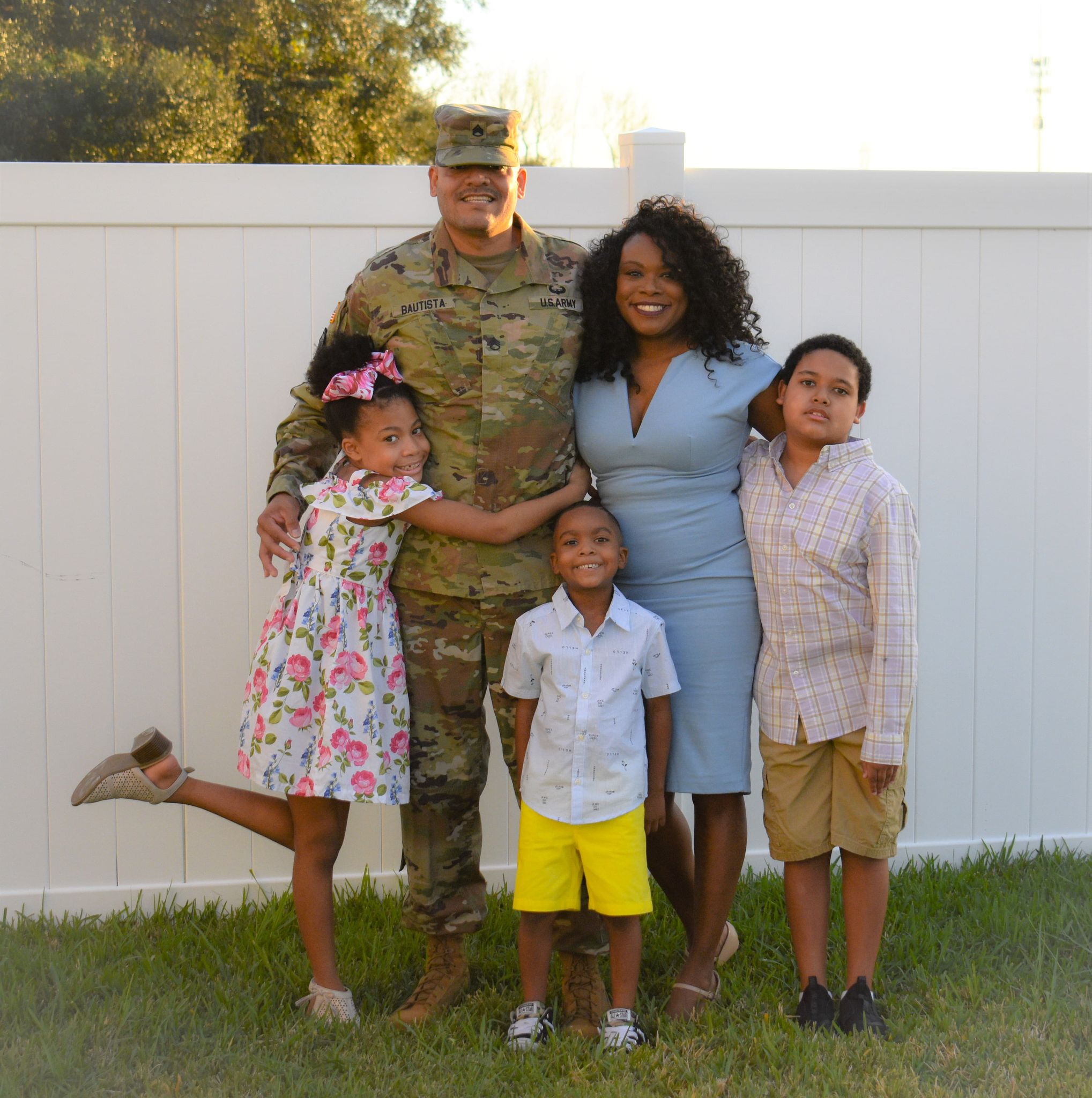 Staff Sergeant Ulisses Bautista and his wife, Marla, were having a quiet afternoon when their doorbell rang and they heard loud banging. Ulisses went to the door first to see what was going on, naturally concerned. But there was no need – he was met with a smiling team member from the Tampa Bay Buccaneers who asked him to get his entire family outside as quickly as possible for a surprise.

“There were about 10 people including two Tampa baby Buccaneers Cheerleaders in our driveway, cheering, clapping and congratulating us,” Marla said. It was then that they realized they had been selected as the General H Norman Schwarzkopf Army Family of the Year. “I was speechless! I think I said ‘Oh my gosh’ 50 times while they were outside my home. We were blown away!”

The Central Florida USO along with the Buccaneers were proud to recognize and honor this Army family. Each year, one family from every branch of service is recognized for their contribution to the military community. They are chosen based on their integrity, courage, commitment and service before self. The awardees selected for 2020 were extraordinary. Stories of life-saving missions, launching non-profit organizations to support the homeless and military family mentorship were just a few of the reasons this year’s families were chosen.

Normally the celebration is held as a large event but with COVID-19, adjustments had to be made. This year it was coordinated through socially-distanced home visits with the Buccaneers Street Team RV, cheerleaders and the mascot to make the presentation. While outside the family received a special message from the co-owner of the Buccaneers and the wife and daughter of the late General H Norman Schwarzkopf.

The family runs The Bautista Project, a nonprofit organization dedicated to serving homeless veterans and displaced youth. The work they do is personal for both of them. “I’m a soldier and servicing my country is something I’ve done for 17 years,” Ulisses explained. “Traveling around the world, I’ve been exposed to different ways of life and unfortunately, different views of poverty. First and foremost, I do what I do because I enjoy doing it but also, I believe what we do will give people in need a sense of self-worth.”

‘When I heard we were selected as the General H Norman Schwarzkopf Army Family of the year I was in shock. I mean there are so many amazing Army families doing great things. However, my family is truly honored to receive this distinguished recognition,” Ulisses said. The award also includes a fun two-night stay for each military family at Tradewinds Island Grand Resort and gift cards courtesy of Lowe’s and PDQ.

Marla herself was homeless as a teenager and it’s an experience that’s never left her. “I promised myself If I were to ever overcome homelessness, I too would give just as those who came before me. I have kept my promise and will continue to work toward ending homelessness in America.  It is an achievable goal,” she said.

On their family receiving this award, Marla shared, “This award means we are doing something right. It means we are inspiring communities to do great work and to us, that’s the goal. Each one of us plays a part in making the world a better place and together we can do just that.”