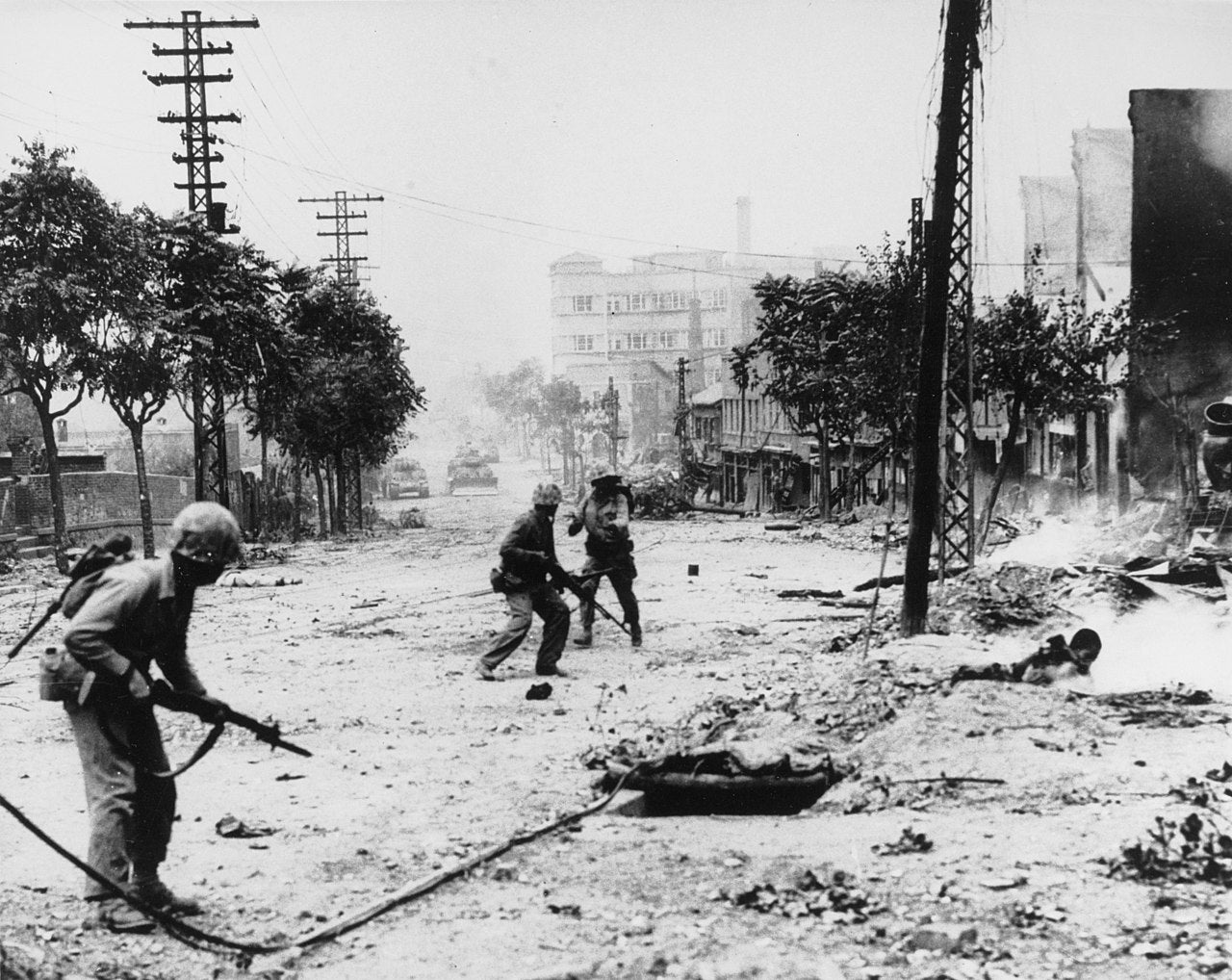 U.S. Marines engaged in street fighting during the liberation of Seoul. Note M-1 rifles and Browning Automatic Rifles carried by the Marines, dead Koreans in the street, and M-4 "Sherman" tanks in the distance. (Naval History and Heritage Command).

On June 25, 1950, North Korean forces poured across its border with South Korea, sparking the Korean War, which was fought for the next three years and has technically been ongoing ever since. The fighting might have ended with a July 1953 armistice agreement between the United Nations forces and communist allies, but the war never really ended.

Rather than join North Korea in formal negotiations that might lead to an end of the war, the South Korean and American governments are in talks to create a formal “end of war declaration.” Lee said the declaration would be a “reasonable approach” to ending the hostilities on the peninsula.

If the United States and South Korea made such a formal declaration, there’s no way to ensure that North Korea would follow suit. The enemy always gets a say in even the best-laid plans.

The idea to formally announce an end to the war is the result of U.S. and South Korean negotiations held over the weeks leading up to Lee’s announcement. The armistice that ended the fighting in 1953 was only supposed to be temporary, as the two sides negotiated a formal peace treaty. South Korean President Moon Jae-In told the United Nations General Assembly earlier in 2021 that it was time to formally end the conflict.

“When the parties involved in the Korean War stand together and proclaim an end to the war, I believe we can make irreversible progress in denuclearization and usher in an era of complete peace,” Moon said.

Some former defense officials say it’s likely that North Korea would demand concessions from South Korea and the United States in order to make such a declaration. These demands would most likely be relaxation of economic sanctions or the reduction of joint military exercises designed to train for a North Korean attack.

They also warn that making any such concessions to Pyongyang would be dangerous ground on which to tread. They also warn that the United States must reaffirm its treaty obligations to defend South Korea in case of North Korean aggression.

North Korea infamously has hundreds, maybe thousands, of artillery pointed at the South Korean capital of Seoul, with a population of nearly 10 million people. Recent developments in the North Korean nuclear and missile programs give dictator Kim Jong-Un the ability to strike the entire peninsula, as well as American and allied forces in Japan, the Philippines, Pacific islands, and even the mainland United States.

The Korean War did not go as planned for the North. During the 1950-1953 conflict, North Korea became the most heavily-bombed country on earth. UN forces dropped more ordnance on the country than the Allies dropped on Axis countries in all of World War II. The war left North Korea devastated and it only likely recovered due to help from Chinese intervention in the conflict and Soviet subsidies over the course of the next 40 years.