The 2022 Army-Navy Game was historic for both teams 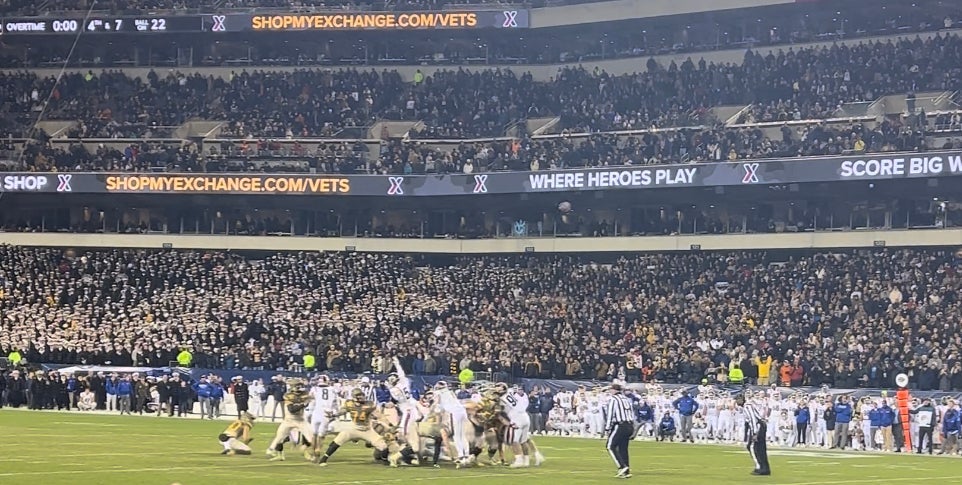 The 123rd Army-Navy Game between the Army Black Knights and the Navy Midshipmen on December 10, 2022 was historic for both football teams. An incredible 69,177 fans attended to cheer on America’s Game. Held at Lincoln Financial Stadium in Philadelphia, Pennsylvania for the first time since 2019 and presented by USAA, the 2022 Army-Navy Game was one for the record.

Following the parachute demonstration jumps and flyovers by Army and Navy, Army won the coin toss and deferred. The first quarter saw a strong Navy start with Army running only four offensive plays. Navy put the first points on the scoreboard with a 44-yard field goal early in the second quarter. Army responded strong with a blocked punt and the first touchdown of the game. Following a successful field goal, Army took the lead 7-3 in the first half.

History was made in the third quarter when Navy ran 77 yards for a rushing touchdown, the longest rush in the history of the Army-Navy Game. A successful field goal put Navy ahead 10-7. Both teams played hard, though neither put up any points until the very end of the fourth quarter. Army kicked a 37-yard field goal with just 1:53 left to go, tying the game. A hard Navy drive was stopped by a firm Army defense, bringing about the first overtime game in Army-Navy history.

Navy won the coin toss and deferred. Army ran a 25-yard touchdown and kicked a field goal, giving them a lead of 17-10. However, Navy responded in kind with a first play 25-yard touchdown pass and field goal of their own, sending the game into double overtime. Navy started with possession and drove all the way to Army’s two-yard line before a hit on a rush forced a Navy fumble which Army recovered.

Just needing a field goal to secure victory, Army made three straight run plays to close the distance. At 39 yards, Army kicked a clean field goal to win the 123rd and one of the most historic Army-Navy Games of all time, 20-17.