Behind the scenes of Top Gun: Maverick with Phoenix and Bob

Behind the scenes of Top Gun: Maverick with Phoenix and Bob 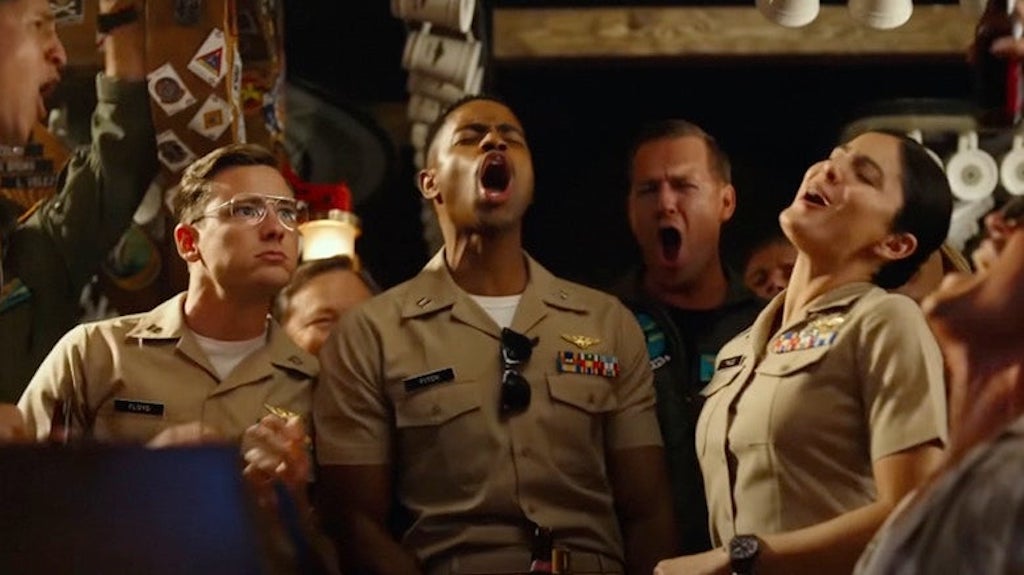 Phoenix and Bob prove themselves to be a capable pilot/WSO duo in Top Gun: Maverick (Paramount Pictures).

Since its summer 2022 premiere, Top Gun: Maverick has captivated audiences with excitement, nostalgia and as much realistic action as the Navy was willing to support. WATM spoke with talent like Kenny Loggins and Chris Parnell (Warlock) who offered great insight behind the making of the film and its music. Monica Barbaro (Phoenix) and Lewis Pullman (Bob) offered their own perspective as an Aviator/Weapons Systems Officer team.

Barbaro, Pullman and the rest of the cast were immersed in the world of Naval Aviation, researching the lives and duties of actual sailors to better portray them on screen. As a flight crew, Phoenix and Bob complemented each other both in the air and on the ground, just like an actual pilot/WSO team. In order to play their characters as realistically as possible, Barbaro and Pullman shadowed real-life Naval Aviators and Weapons Systems Officers.

Barbaro flew with female pilots who showed her that competence and professionalism is the same for both men and women. “I got to fly with Dragon and Bacon who were both these incredible women who held their own and earned every bit of respect they got, and they got a lot of it,” she recounted to WATM. “They were a big part of the preparation.” She also credits Pullman’s portrayal of the more reserved but professional Bob for her character’s likability.

The WSOs who Pullman shadowed showed him that being a Naval Flight Officer is more than playing piano and beach sports. “Some of them are a little quieter, more reserved, but they’re all the same when they get up into the sky,” he told WATM. “That’s what I wanted to portray; just because you don’t have the same social lubricant doesn’t mean you can’t be the best at what you do.” Pullman also highlighted the critical relationship between and pilot and WSO. “To be able to depict that with Monica and show that [Phoenix and Bob] formed together into this perfect team was really fun and really important,” he said.

In preparation for his role as Bob, Pullman drew on his father’s experience depicting a onscreen pilot. His dad, actor Bill Pullman, portrayed President Whitemore in the 1996 film Independence Day. In it, he flies a legacy F/A-18 Hornet. Although the senior Pullman didn’t fly in a real fighter jet for his movie, he had an important piece of advice for his son. “His main note for me was to be a sponge and soak up all these experiences with actual pilots and WSOs and try and do justice to what is actually real,” Pullman recalled his father telling him. With this in mind, he paid special attention to what previous films got wrong about military pilots in order to make his own performance as realistic as possible.

On the note of realism, Barbaro and Pullman went through exposure training to portray the intensity and professionalism of a real aircrew during the bird strike and missile evasion scenes. “We watched some footage of actual pilots evading more than 10 SAMs that almost hit them,” Barbaro recalled. Additionally, code words had to be used during the in-flight filming since the scene required the actors to actually say “eject, eject, eject,” on an actual flight.

Pullman noted the difficulty of the bird-strike scene in having to depict different emotions that pilot would feel during a mishap. “It was kind of an intense sequence to try and do justice do,” he said. “That was a hard line to draw of maintaining composure while also portraying the panic and fear that would naturally come into play.” Interestingly, the duo filmed their ejection scenes on a simulator before they did any real flying. “That was maybe a fraction of the power of actually ejecting,” Pullman recalled.

An incredible amount of time and effort went into making Top Gun: Maverick both entertaining and realistic. The result was a box office smash hit that grossed over $1.4 billion to date. Its success is due in no small part to the dedication and commitment of actors like Barbaro and Pullman to portray real-life sailors as accurately as possible.