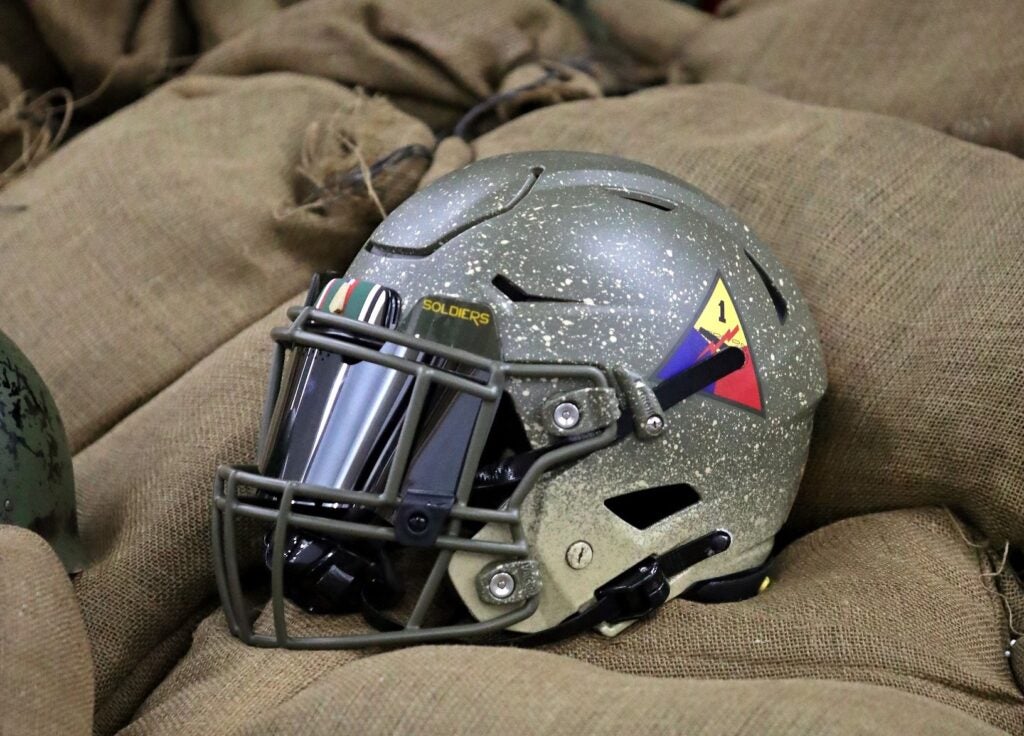 2022 marks the 80th anniversary of Operation Torch, the Allied invasion of French North Africa during WWII. It was also the beginning of American ground operations against Axis forces in the European theater. Spearheading the invasion and receiving its baptism of fire was the 1st Armored Division. To celebrate this, Army’s uniform for the 2022 Army-Navy game honors the 1st Armored Division.

The 1st Armored Division’s nickname is “Old Ironsides.” Ironically for an Army-Navy game uniform, the nickname was coined by the division’s first commander, Maj. Gen. Bruce Magruder, after he saw a picture of the USS Constitution which is nicknamed “Old Ironsides.” Still, the division and its Iron Soldiers were the first American armored division to see combat during WWII and Army’s tribute uniform bears the details to honor the unit appropriately.

The American flag on the back of the helmet is actually a WWII-era flag with 48 stars, since Alaska and Hawaii did not become states until 1959. On the front of the helmet is an Algeria-French Morocco Campaign Streamer with an Arrowhead Device to denote the amphibious landing that kicked off Operation Torch. Flanking it is the division’s motto, “Iron Soldiers”. The helmet also features the distinct 1st Armored Division unit patch.

The 1st Armored Division continued to serve through the Cold War, Operation Desert Storm, and the Global War on Terror. In 2011, the division uncased their colors at Fort Bliss, Texas, signifying their official move back to the United States from Germany. When the West Point Black Knights take the field on December 10, 2022, they carry the legacy of the 1st Armored Division with them and honor the unit’s first action during Operation Torch 80 years ago.