How a Greek foot soldier inadvertently invented the marathon 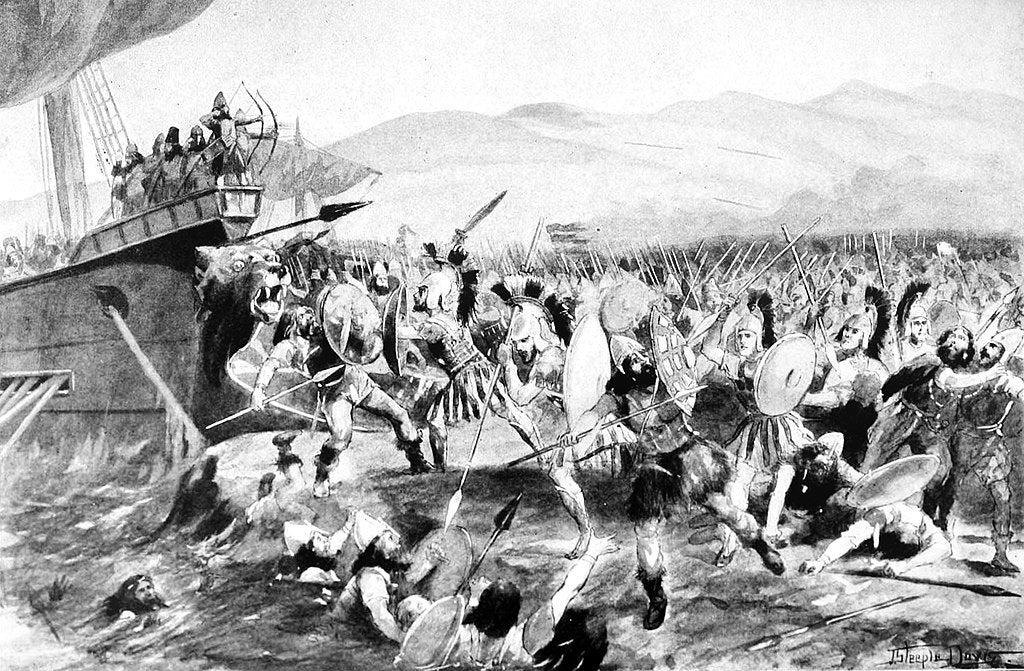 Scene of the Battle of Marathon. (Wikipedia).

The Battle of Marathon took place in 490 BC, where Greek and Persian forces fought for control of Greece. The homefront army won, despite being greatly outnumbered, and the win was imminent. It was not even close. This event marked a turning point in the Greco-Persian Wars, which ended 50 years of turmoil with Greece as the victor.

However, even more notably than the wars themselves was the subsequent athletic event that was born from this infamous battle, the marathon. Named for the city in which it originated, of course, a single Greek soldier left on foot to spread the word of the battle.

Pheidippides, a foot soldier or “day runner,” ran from Marathon to Athens — approximately 25 miles — to share the good news. Greece had won.

A recreation of the Battle of Marathon. Photo courtesy Wikimedia Commons.

His tale goes like this, Pheidippides’ job within the army was to deliver the news; running long distances was nothing new for him. When the Persians landed in Marathon, he was sent running to Sparta to ask for help. Over just two days, he ran more than 150 miles, delivering the word and asking for additional forces to be provided. Pheidippides then had to turn around and return to Marathon.

Pheidippides saw a Persian ship change courses. As Greece was about to win, the enemy ship turned; he interpreted this as Persia attempting to storm the capital and claim a false victory.

To prevent this, he took off in a sprint. Shedding his clothes and even shoes, so as to discard as much weight as possible, he ran the distance without stopping. When arriving in Athens he shouted, “Lucian chairete, nikomen” or “Hail, we are the winners.”

Then he fainted and died on the spot. At least, that’s the version that poet Robert Browning told in his famous 1879 poem, Pheidippides.

However, many historians say that the event is likely fictionalized. And considering most of the story comes only from written excerpts, and varying ones at that, it’s hard to decipher what’s accurate and what was romanticized for the sake of a good story. In fact, not everyone even agrees it was Pheidippides who did the running.

But it’s his story that is the most widely accepted and remembered among the masses.

In any case, the running stuck. Browning’s poem inspired founders of the Olympics to create a foot race that dated back to ancient Greece, naming it the marathon. Originally, the race spanned 25 miles, but due to inaccuracies, they called it to be lengthened. By 1921 the official length of each marathon sat at 42.195 km, or 26 miles and 385 yards AKA 26.2 miles.

Since 1983, runners traveled to see if reaching Pheidippides’ 155 miles in 36 hours was even possible. Only one made it in the designated time, with two more crossing the finish lines by 39 hours. In subsequent years, it has been an annual footrace from Athens to Sparta, known as the Spartathon, spanning 153 miles across Greece.

Today, more than 800 marathon races are held annually all around the world.