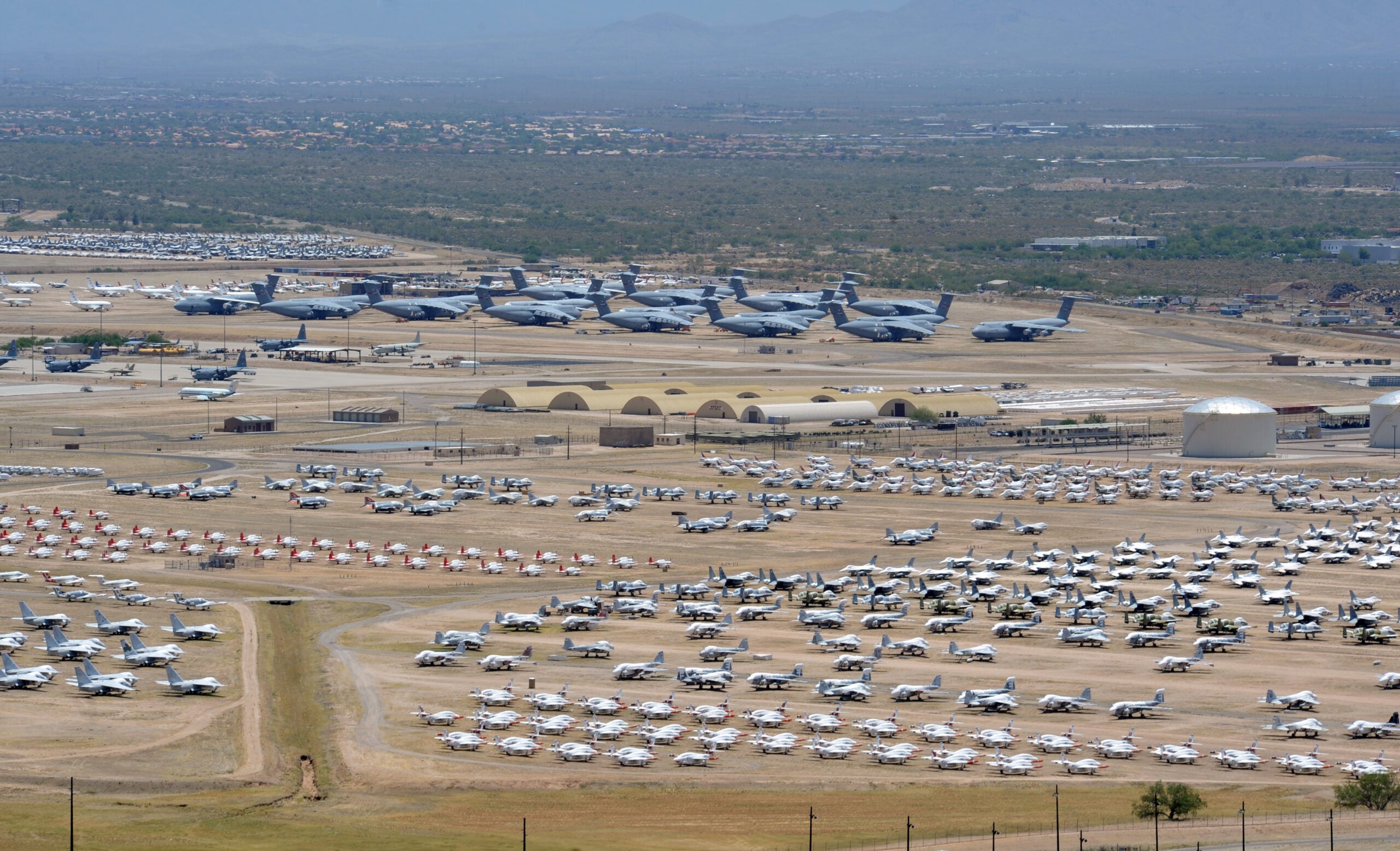 Many are familiar with the aircraft boneyard at Davis Monthan Air Force Base in Tucson, Arizona.

Since 1946, retired and surplus military aircraft, both from the U.S. armed forces and allied nations have been sent to the Arizona desert for “dry” storage and, for most, eventual dismantling for scrap. By several measures, including its 2,600 acres, it is the largest aircraft storage and preservation facility in the world.

Currently, there are 4,200 aircraft at the Air Force’s 309th Aerospace Maintenance and Regeneration Group, or “AMARG” as the site is known. AMARG has three basic missions within its operations: storage, harvesting spare parts, and sales.

The first mission is to store aircraft for all branches of the U.S. military, federal government agencies, and several foreign militaries. The storage phase actually constitutes preservation for possible return to flying service. Flying Hold or Type 3000 is the highest level of preservation storage. These aircraft are kept intact with regular engine runs, and the aircraft are towed to ensure bearings remain lubricated. Fluids are checked, replenished, and replaced as needed.

This high level of storage and preservation can pay real dividends. In 2016, 23 former Navy F/A-18 Hornet aircraft were pulled from the boneyard, upgraded, and then placed in service with the U.S. Marine Corps. In 2014, newly built Air Force C-27J Spartan twin-turboprop military transport aircraft were sent directly to AMARG due to defense budget cuts. Many of these aircraft were subsequently placed in service with the U.S. Coast Guard, the Forest Service, and a small number with Special Operations Command. In addition, former U.S. military aircraft are often removed from storage and sold to foreign militaries.

Along with piloted aircraft, 65 MQ1-B Predator and 14 MQ8-B Firescout Drones are in storage at the facility.

The second phase of operation is harvesting spare parts for use in similar aircraft still in service. This is a great cost reduction benefit to taxpayers, as well as vital to keep aircraft flying long past their initial service life, especially after manufacturers’ production lines have been shut down.

Once no possibility of future need is determined, the final phase is the destruction of the aircraft and preparation for the sale of surplus parts and scrap metal to civilian contractors. Preparation for sale includes the removal of any hazardous materials and the complete demilitarization of the aircraft. Money generated from sales, usually done by auction, is returned to the U.S government. AMARG claims that for every dollar spent on its operations, $11 is recovered in spare parts or scrap metal sales.

When the 1991 Strategic Arms Reduction Treaty (START) with Russia was signed, AMARG was called upon to perform the phased destruction of 365 operational B-52 bombers, which was finally completed in 2001. Only 70 B-52 bombers are now currently operational in the U.S. Air Force.

Originally a 13,500lb guillotine blade was used to slice through each B-52. This was effective in allowing the two halves of the aircraft to be positioned for easy satellite verification of compliance with the START Treaty, before further destruction. However, this blunt force method created some structural instability in the halves of the aircraft which impeded the recovery of parts and completion of tasks necessary for scrap sales, so eventually, power saws were used. Each scrapped B-52 airframe yields some 150,000 pounds of aluminum and other metals for sale. Conversely, since 2015, two Air Force B-52 bombers, nicknamed “Ghost Rider” and “Wise Guy”, were removed from the boneyard, and returned to active, front-line service at Barksdale AFB, Louisiana.

Starting in the 2000s, AMARG became more involved in depot repair, maintenance, and modification work on aircraft such as the A-10 Thunderbolt and C-130 Hercules. The A-10 “Hog Up” program extended the venerable ground attack aircraft’s service life to 2028. When wing cracks were discovered in the A-10 fleet in 2008, AMARG completed the mandatory checks and repairs on 84 aircraft. The facility also started Programmed Depot Maintenance (PDM) overhauls of C-130 aircraft in 2009.

Access for civilian visitors was limited to tours conducted by the nearby Pima Air Museum. These tours were suspended during the COVID-19 pandemic and have not resumed by the time of writing. The boneyard has been featured in several movies, television shows, and music videos. Most notable was Transformers: Revenge of the Fallen in 2009.