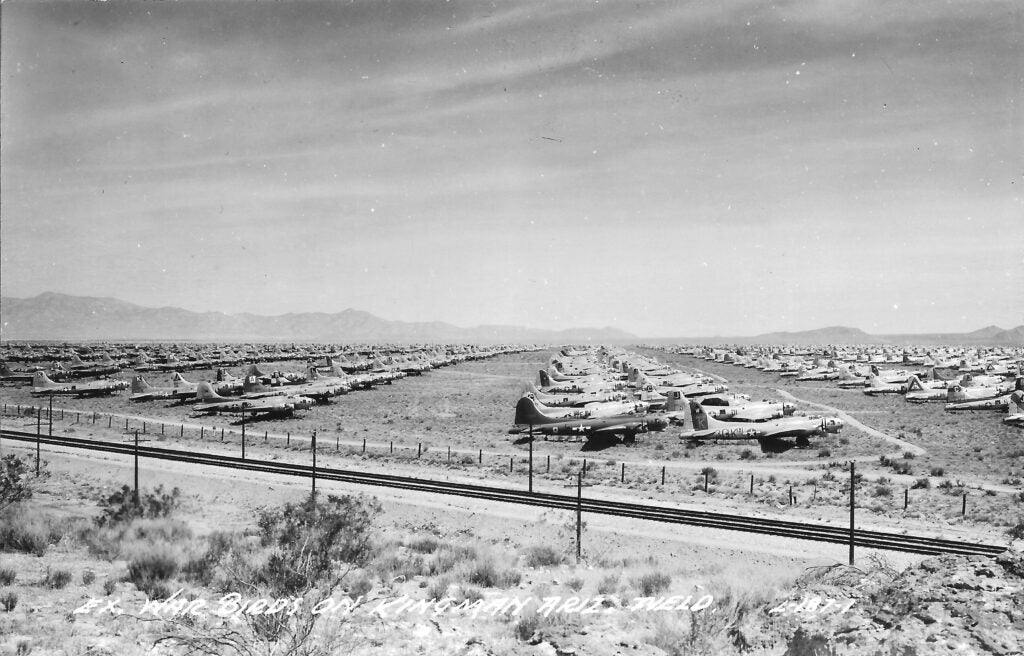 When the Japanese surprise attack on Pearl Harbor brought the United States into WWII, the US military had a lot of catching up to do. Having sent much war material overseas to help its allies hold back the Axis powers, America needed to ramp up production of tanks, planes, bombs, and bullets. Although there was no shortage of men joining up to fight, they still needed to be trained before going off to war. One of the most important training bases established during WWII was Kingman Army Air Field in Arizona.

Kingman might be familiar to music and car enthusiasts for its mention in Bobby Troup’s hit song “Route 66.” Before the Army Air Forces put up a base there, Kingman was already a significant early aviation town. Charles Lindbergh himself established an airport there called Port Kingman for Transcontinental Air Transport, the precursor to TWA. Constructed in just a few months, Port Kingman welcomed its first passenger arrivals: Col. Lindbergh, his wife, Ann Morrow Lindbergh, and Amelia Earhart on July 8, 1929. Port Kingman quickly became a booming stop for early air travelers making their way to or from Los Angeles.

In early 1942, the US government began scouting Kingman as the site of a major base. On May 27, a telegram was sent saying, “The Kingman gunnery school site is approved and construction ordered.” Over $3 million would be spent on building the Army Air Forces Flexible Gunnery School, Kingman, Arizona. The base was activated on August 24, 1942 and the first class of enlisted men arrived later that year on December 1. The gunnery school was the sixth of its kind in the nation, but soon became the largest.

The base consisted of gunnery ranges, five target flight lines, and two auxiliary landing strips. It was also supported by nearby Yucca Army Air Field which operated several emergency landing strips. Gunnery students were trained in three phases: ground school, range firing, and live aerial gunnery. Upon completion of the intensive training, gunners were promoted to the rank of sergeant or staff sergeant and awarded their gunners wings. The school also hosted entertainment legends Bob Hope and Jerry Colonna.

On April 14, 1943, Hope and Colonna were given a crash course at the Flexible Gunnery School. The two comedians were brought to the elementary BB gun range and presented with replica targets of each other. Hope hit his Colonna target square in the face and joked, “When do we leave for Guadalcanal?” While Hope and Colonna trained with BB guns, actual gunnery students would also train with pellets before moving on to bullets. Skeet shooting was used to teach gunners how to lead. Other creative instructional methods included camera guns that would take a picture when the trigger was pulled and the use of frangible bullets on armored P-39 and P-63 target aircraft.

On May 13, 1943, the base’s name was changed to Kingman Army Air Field to indicate its geographical location. Later that year, on August 13, Kingman proved its superiority against the other five gunnery schools at a gunnery competition. The five-man aerial gunnery team from Arizona beat out their competitors from airfields in Harlingen, Texas; Laredo, Texas; Tyndall Field, Florida; Ft. Myers, Florida and Las Vegas, Nevada. By 1944, on its second anniversary of establishment, KAAF earned an “excellent” rating from the War Department that said, “KAAF graduates had whizzed .50 caliber machine gun slugs into Jap Zekes and Tonys over the South Pacific’s tropical seas and had blasted Focke-Wulfs and Messerschmitts out of the air over Berlin, Cologne and the Normandy Invasion beaches.”

On June 30, 1945, as the war drew to a close, KAAF was placed on temporary inactive status. The Reconstruction Finance Corporation took over the field on September 27 for aircraft storage and disposal. By the war’s end, over 35,000 aerial gunners were trained at Kingman.

With its dry climate and huge open spaces, Kingman was an ideal location for aircraft storage. One of its runways was 6,800 feet in length, perfect for larger bombers. However, not all planes landing at the newly established Storage Depot No. 41 used the runway conventionally. With as many as 150 planes arriving every day, some aircraft reportedly performed belly landings and were towed into storage to allow planes to flow in faster. By the end of 1945, roughly 4,700 planes were stored at Kingman. By 1946, the last planes were flown in. The storage field included 85 reconnaissance aircraft, 615 fighters, 54 light bombers, 226 medium bombers, and 4,463 heavy bombers for a total of 5,443 planes.

By 1949, the sale or disposal of the surplus WWII aircraft was complete and Kingman AAF was turned over for civilian use. Although the majority of the military buildings were removed, its air traffic control tower still stands to this day. Because Kingman was not converted into an Air Force base, it is one of the few remaining WWII-era Army ATC towers. Today, the former KAAF serves as the Kingman Airport & Industrial Park. It hosts over 70 different business and provides temporary storage for commercial airliners. Locals and visitors can still visit some remnants of the old gunnery ranges and occasionally find expended shell casings. The historic Route 66 town continues to tell stories to those who are willing to listen.