The complete guide to Fort Leonard Wood - We Are The Mighty 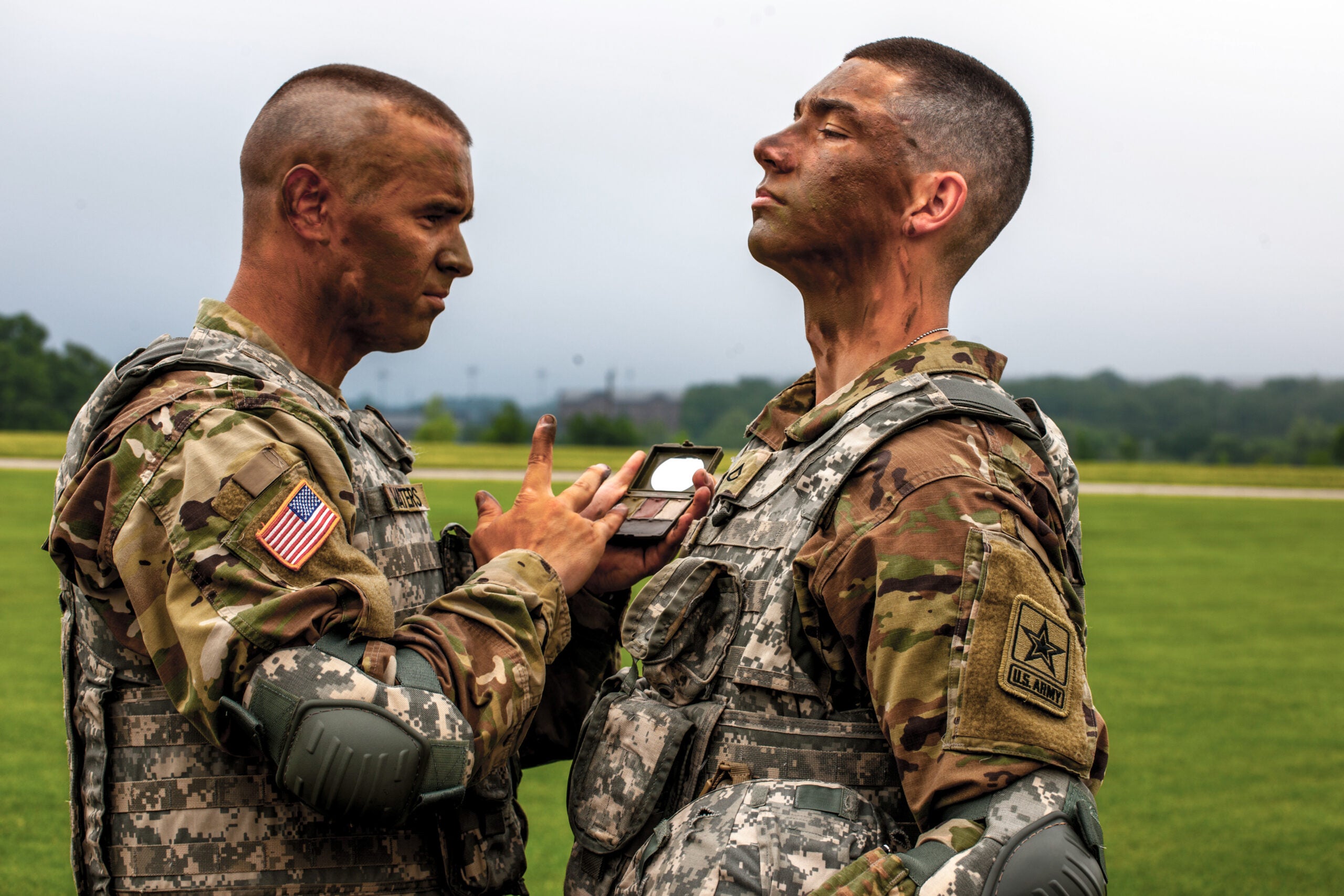 Pfcs. Nathan Waters, left, and Matthew Williams apply camouflage face paint in preparation for the breaching demonstration put on for friends and family during a graduation ceremony held May 18, 2018, on Fort Leonard Wood's Gammon Field. (DVIDS).

Are you a fan of the Ozarks or maybe you’ve just seen the show and you’re itching to get to the Show Me State. Well, Fort Leonard Wood isn’t going to be quite like that, but that doesn’t mean your time in rural Missouri won’t be amazing! If you’re wondering about Fort Leonard Wood Missouri weather or if you have questions about basic training, this guide will help you understand what to expect when you PCS to your next duty station.

Fort Leonard Wood is located in rural Missouri, so there’s not a ton to do, but there is a certain charm to the region. This Army post covers more than 61,000 acres, so it’s massive! It’s also home to the 1st Engineer Brigade, the 3rd Chemical Brigade, and the 14th Military Police Brigade – among others. There’s a lot of history to uncover at Leonard Wood. In fact, it housed POWs during WWII.

Fort Leonard Wood is located in the south-central Missouri Ozarks, about 92 miles northeast of Springfield, Missouri, and 140 miles southwest of St. Louis, Missouri.

Fort Leonard Wood can be reached by car using the following routes.

Waynesville-St. Robert Regional Airport (9.1 miles): Small airport with 1-2 round trip flights to and from Chicago daily on United Express, operated by SkyWest Airlines.

The Maneuver Support Center of Excellence develops competent leaders and warriors of character and drives change in total Army Engineer, CBRN, Military Police, and Protection capabilities to enable mission success across domains and the range of military operations.

Units and Tenants at Fort Leonard Wood are varied. As a matter of fact, they include the Army Engineer School, the CBRN (Chemical, Biological, Radiological, and Nuclear) School, and the Military Police School. Of course, there’s also the 102nd Training Division, the MSCoE NonCommissioned Officer’s Academy, and the 43rd AG Reception Battalion. Let’s not forget the 399th Army Band, the 5th Engineer Battalion, the 58th Transportation Battalion, and the Homeland Defense Civil Support Office. The U.S. Air Force, the Marine Corps, and the Navy all have detachments at Fort Leonard Wood.

Once trainees arrive at Fort Leonard Wood, their first stop is the 43rd Adjutant General Reception Battalion in Grant Hall. As well as being issued uniforms, trainees will receive immunizations and medical exams, and fill out essential paperwork.

During the winter of 1940, America was preparing for her likely entry into World War II. Throughout the Ozarks, word quickly spread that the Army would build a training center in Pulaski County, Missouri.

The original idea for the fort was to train infantry, but engineer training soon became part of the mission. During World War II, Fort Leonard Wood housed Axis prisoners of war. Later, the fort would benefit from Base Realignment and Closure Commission decisions – in 1984, a large portion of U.S. Army Engineer School operations were consolidated there. Then, in 1999, Fort McClellan, Alabama, was closed. Leonard Wood inherited the U.S. Army Chemical Corps and Military Police Corps missions. It was re-designated as the U.S. Army Maneuver Support Center.

More than 80,000 military personnel and civilians train at the 63,000-acre installation each year. However, training is not limited to the Army. Air Force, Coast Guard, Navy, and Marine Corps service members also train at Fort Wood. Military graduations are held on the base multiple times a week throughout the year.

Things to Do Around Fort Leonard Wood

Laughlin Park (5.8 miles) is a peaceful and scenic park with fishing access, an NPS Trail of Tears Memorial and concrete walking trail, and a boardwalk above the underwater cave.

The Old Stagecoach Stop Museum (5.5 miles) is the perfect Saturday experience for your family. Volunteers dress in period costumes and share stories of the historic building, which began as a log cabin and later served as a stagecoach stop, inn, and apartments. (Open on Saturdays April – September or by appointment.)

1903 Route 66 Courthouse Museum (5.5 miles) is open by appointment only but is a great stop for learning more about the Trail of Tears, the Civil War, WWI, WWII, and other Missouri history.

Unaccompanied housing is available for single/unaccompanied service members, ranked E5 and below. Call the Military Housing Office for more information, including estimates on wait times.

Off-post rentals and purchases are also available. The MHO can help you decide if this is a viable option for you and your family.

There are four elementary schools on Ft. Leonard Wood. They all feed from the Waynesville School District. Mil-kids will also benefit from an additional two elementary schools, one middle school, and one high school. Call the School Liaison Officer for more information on enrollment procedures.

What is the weather like in Fort Leonard Wood, Missouri?

The weather in Missouri fluctuates a lot – locals say, “The saying in Missouri is, ‘Just wait 5 minutes, and it will change!’” You can expect about 45 percent humidity in the winter and 85 percent humidity in the summer. There are generally a few weeks at the end of July/beginning of August where the temperature reaches the upper 90s and 100s, and you can expect snow in the winter!

How far is Fort Leonard Wood from Kansas City, Missouri?

Where should I live near Fort Leonard Wood?

Saint Robert, Missouri, is the closest town to Fort Leonard and the best place to live if you are interested in living off-post.

How long is basic training at Fort Leonard Wood?