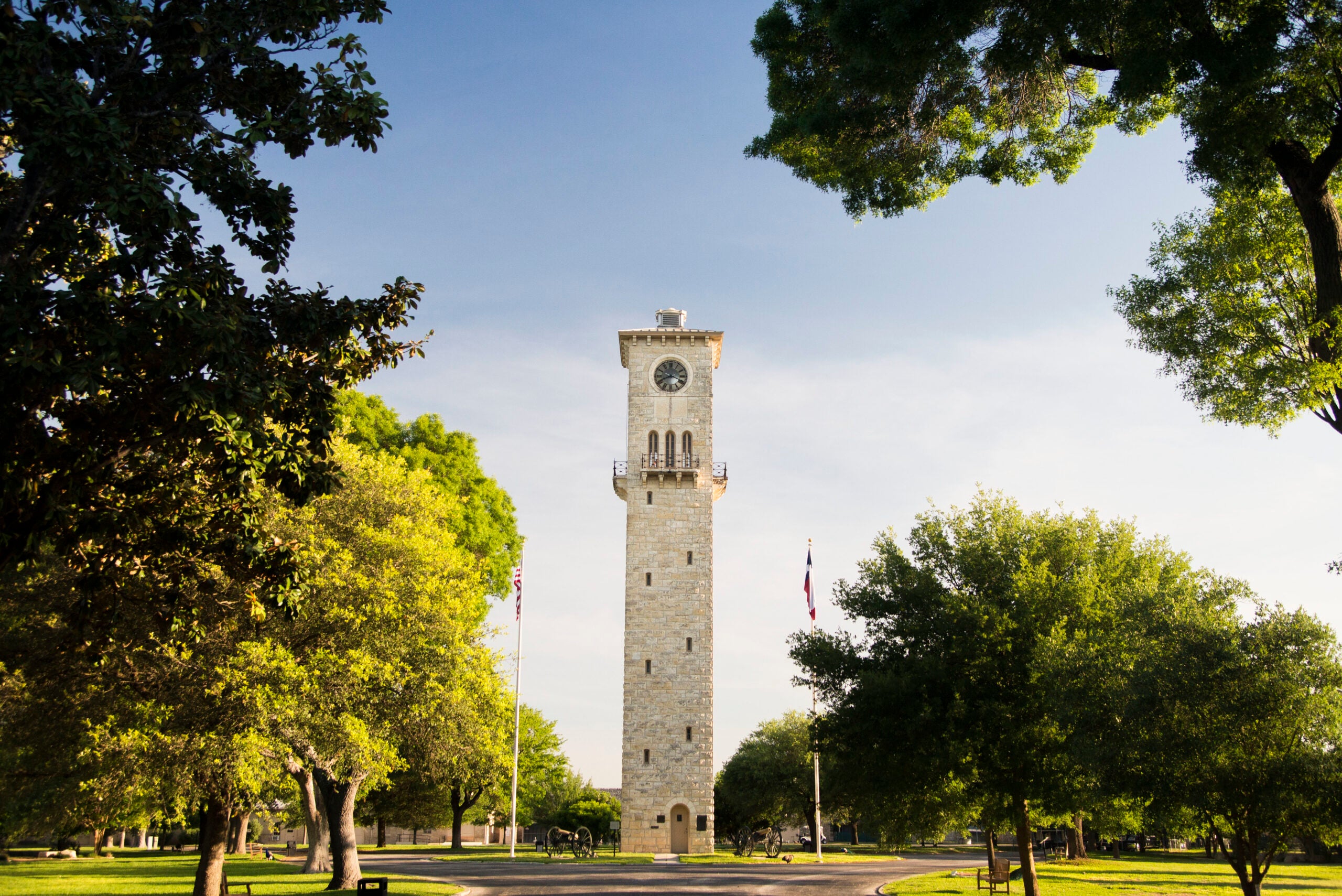 The clock tower stands tall in the middle of the Quadrangle April 11, 2018, at Joint Base San Antonio-Fort Sam Houston, Texas. The Fort Sam Houston Quadrangle, built by George Henry Griebel, is the oldest structure on the base and was originally a supply depot. The Quadrangle now serves as the headquarters for U.S. Army North. (U.S. Air Force photo by Sean M. Worrell).

If you’re headed to Ft. Sam, brace yourself for one of the most robust and dynamic military towns you’ll ever find. Known as Military City, USA, Ft. Sam Houston housing, commissary and the post itself are something of a legend. Because it’s a joint base, Army families here will enjoy all of the amenities of an Air Force base with all of the comforts of an Army post. In fact, Ft. Sam is one of the Army’s oldest installations, tracing its roots back to the 1840s. You’re probably heading to Ft. Sam if you’re in the medical field, since it’s home to the Army Medical Command and the Army Medical Department. There’s so much to learn, love, and appreciate about this unique post. Read on to find out more!

Fort Sam Houston can be reached by car using the following routes.

Driving from the US-Mexico Border? Take I-35 N.

San Antonio International Airport (9.8 miles) is the closest airport and is served by all major airlines with multiple destinations.

Driving would allow you to get around San Antonio more easily, but prepare for a long drive. San Antonio is about 150 miles from the US-Mexico border.

68Ws, sound off! Ft. Sam Houston is all about medical training support. The post graduates more than 16,000 Soldiers from the Medical Education and Training Campus each year.

There are also over 100 mission partners embedded in Fort Sam Houston. These include the U.S. Army North and U.S. Army South commands. Camp Bullis, located northwest of San Antonio, serves primarily as a field training site for medical units.

Brooke Army Medical Center (BAMC) at Joint Base San Antonio-Fort Sam Houston, Texas, is the largest military healthcare organization within the DoD. In and outpatient services are offered to service members, their families, and retirees by approximately 8,500 staff members.

Way back in 1845, the Army established a garrison at San Antonio. About 25 years later, the Army started construction on the Quadrangle. Garrison was moved to the site a few years later. In 1890, Ft. Sam Houston was officially named for Gen. Sam Houston. Houston was the hero of the battle of San Jacinto and the first president of the Republic of Texas in 1890.

Ft. Sam is massive and it plays a vital role in the nation’s defense. It’s also home to some of the oldest structures on any Army post. These days, nearly 40,000 active duty and DoD civilians call Ft. Sam home. There are also almost 50,000 family members and over 75,000 retirees in and around installation

Fort Sam Houston is unique among Army posts as it is a major, active military installation that plays a vital role in the nation’s defense, and it contains some of the oldest structures on any Army installation.

Things to Do Around Ft. Sam Houston

Foodies, rejoice! San Antonio has a vibrant food scene, so you’ll never run out of places to eat. Of course, there’s plenty of takes on Tex-Mex to be found, but there’s a lot more too. Of course there’s the standard fare you might expect from the region, but San Antonio also has a vibrant barbeque scene and a ton of highly-rated pizza places, too. When you go, be sure to check out the dazzling dessert options. Just make sure you counteract all that deliciousness with plenty of extra PT. Speaking of PT, did you know you’re up at 0630 every day because of Teddy Roosevelt?

The Alamo (4.3 miles): Visit the historic Spanish Mission San Antonio de Valero, site of the Battle of the Alamo during the Texas Revolution. The site features mission tours and gift and book shops.

Since Ft. Sam Houston is part of the larger Joint Base San Antonio footprint, Army families can expect to work with the Air Force for housing needs. All service members need to report to the Military Housing Office on arrival to receive guidance about the current housing landscape.

It’s also important to speak with the MHO because there are several duty locations at Ft. Sam and each assignment has different options available.

No matter where you work, your choices for housing are varied and exciting. Family housing is offered by Balfour Beatty. This private company owns and operates six distinct neighborhoods on and near the base. Some neighborhoods are for enlisted service members only; others are for officers only.

What branch of the military is Fort Sam Houston?

What is Fort Sam Houston known for?

Ft. Sam Houston is known as the “Home of Army Medicine” and “Home of the Combat Medic.” As of 2011, it is the largest and most important military medical training facility in the world.

What is the closest airport to Fort Sam Houston?

San Antonio International Airport is the closest airport and is just 9.8 miles away from Fort Sam Houston.

How big is Ft. Sam Houston?