The military is the reason for the Boeing 747's iconic hump 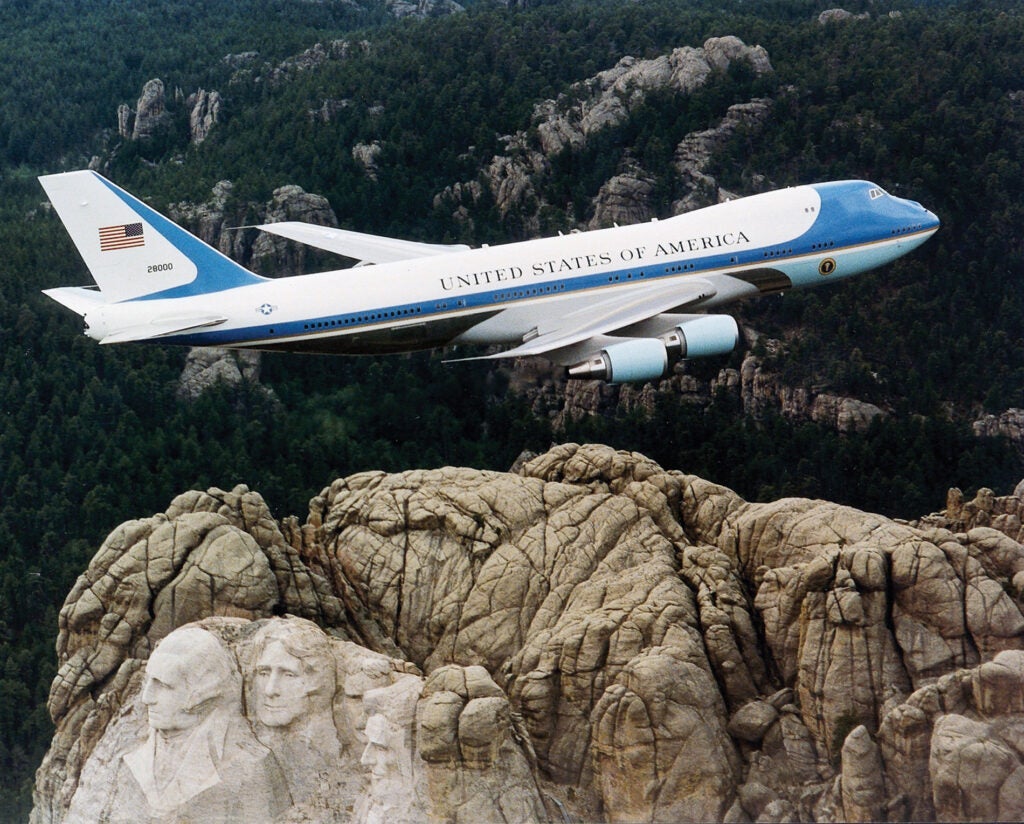 The VC-25 that serves as Air Force One is a modified military version of the Boeing 747 (U.S. Air Force).

In October 2022, the last Boeing 747 rolled off the production line. Dubbed the “Queen of the Skies,” the 747 was the original jumbo jet and opened air travel to a wider market. With its large size and high lift capacity, the aircraft has also become iconic in its service as a Space Shuttle Carrier and Air Force One. A defining feature of the 747 is its iconic front-end hump. Whereas the Airbus A380 has a full-length upper deck with its cockpit slightly above the lower deck, the 747 has an abbreviated upper deck where its cockpit is located. The reason for this unique design can be traced back to a military contract.

In 1963, the U.S. Air Force began a series of studies to research the development of a very large transport aircraft. Although the Lockheed C-141 Starlifter already made its first flight and was in the process of entering service, the Air Force anticipated needing an even larger transport. From these studies, the requirements for the CX-Heavy Logistics System were established. The new aircraft needed to have a load capacity of 180,000 pounds, a speed of Mach 0.75, a range of 5,000 nautical miles with a payload of 115,000 pounds, and a cargo bay measuring 17×13.5×100 feet. Moreover, the cargo bay had to have access from the front and rear.

In May 1964, major American aeronautical companies submitted proposals for the CX-HLS airframe. Along with Douglas and Lockheed, Boeing was awarded an additional study contract for their airframe. In order to accommodate the front cargo access, Boeing designed a long pod on top of the aircraft that stretched from just behind the nose to just behind the wing. The cockpit and other crew compartments were placed in this pod, allowing the rest of the aircraft underneath to be used for cargo. This also allowed the nose of the aircraft to open for cargo loading and unloading. Although Lockheed won the CX-HLS contract in 1965, Boeing would hold on to its raised cockpit and nose door designs.

In the early 1960s, Pan Am president Juan Trippe approached Boeing to design a passenger aircraft 2.5 times larger than the existing 707. Congestion at airports and increased passenger demand led Trippe to look for an aircraft with more capacity. With Pan Am being one of Boeing’s biggest customers, Trippe’s request led to the 747 project. However, by 1965, supersonic airliners looked to be the future of air travel. Although America’s Supersonic Transport Program didn’t pan out, France, Britain, and the Soviet Union were pushing on with their designs. Boeing and Pan Am needed to future proof the subsonic 747 in case supersonic airliners took over.

The 747 was initially designed with a full-length double-deck fuselage, like the later A380, to achieve its high passenger capacity. However, concerns over evacuation routes during an emergency prompted the design of a wide single deck. Moreover, the single-deck design allowed for increased cargo capacity. This became key when Boeing and Trippe agreed to design the 747 as a passenger plane that could be easily converted for use as a cargo plane. With Pan Am committed to purchasing 25 aircraft, a fleet of heavy-lift cargo planes could still provide the company with revenue if supersonic airliners caught on.

In order to optimize the 747 for cargo duties, Boeing gave the aircraft a nose that could open upwards for easy cargo loading and unloading. This design was carried over from the CX-HLS proposal. Additionally, while the 747 has a wide single deck for passengers, the cockpit was placed in a long pod on an upper deck behind the nose. Another carryover from the CX-HLS, this allows the 747 to be configured for both cargo and passenger use. With space at a premium in the aviation industry, the upper deck retains a small number of seats for passenger use. The hump of the 747 has been used for business class, first class, and even airborne lounges by different airlines. Although few airlines still operate 747s for passenger flights, preferring newer and more efficient twin-engine jets, the quad-engined jumbo remains in heavy use as a cargo plane, validating Boeing and Pan Am’s design decisions in the 1960s.