From 'them thar hills' to the frontlines of WWII, a Marine is remembered

From ‘them thar hills’ to the frontlines of WWII, a Marine is remembered 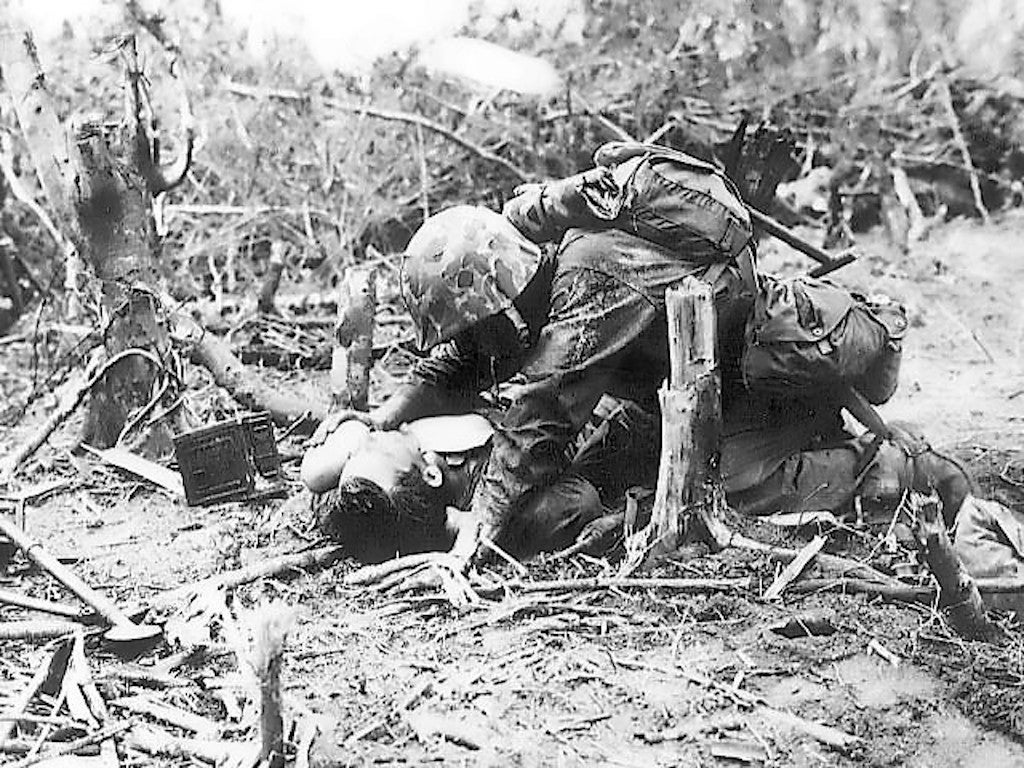 A wounded Marine on Peleliu receives a drink from a Navy corpsman.

The story goes that “little” Bobby went from table to table—Army to Air Corps—and was rejected each time. As much as America needed its fighting men, some fellows just didn’t look up to the challenge. Evidently, even Uncle Sam’s Navy didn’t need “The Kid” sweeping decks. At each table, Bobby Ellis was told, “Try the Army, son!” Et cetera. Until he reached the U.S. Marine Corps table.

In 1942, the Depression was still raging in the Ozark Mountains of northwest Arkansas. Farmers could scratch out a living in those rolling hills, dominated by rocks, thistles, rich river bottom land, and in the summer, stifling humidity. But the work was brutal. Teams of mules still did the plowing, and putting up hay meant cutting it and dotting the pastures with high stacks of alfalfa.

The events of December 7, 1941 were very far away geographically, But those that lived in “them thar hills” had patriotic hearts that beat for their country.

Bobby Ellis was 17 when all his friends traveled 20 miles to Harrison, to join in the fight against the Axis. He weighed maybe 125 pounds when he met the recruiter.

STAMP. The Marine sergeant’s meaty hand slammed a stamp onto a form and said to Bobby, “You are a Marine, son!”

Preparing a war machine to take on the Japanese in the Pacific was a daunting task in the spring of 1942. The United States had tried hard to stay out of the conflict raging in Europe and east Asia. It has been said that the vast majority of American troops that fought in World War II had to that time never seen the ocean or flown in a plane.

A two-hour attack in idyllic Hawaii changed all that. The whole country went into mobilization. If anyone thought the America Eagle wouldn’t fly, they were flat wrong. America was on a war footing.

Bobby Ellis went through basic in San Diego. If he thought that was exotic, he was about to see things he’d never forget. And sometime during all that, he became just Bob. Life was toughening him in ways different from the challenging existence in a poor farming community.

We’ll let Bob’s son, Mark, take the story from here. We will tell you the end of the story—Bob Ellis made it home—but in some way, his story continued.

Mark says that his dad suffered from would become known many years later as PTSD. “He’d wake up in the middle of the night, screaming. Mom would have to leave the room. After a while, I would go in and he would calm down.”

Bob told his son stories about fighting the Japanese in those island-hopping operations that dragged on for three years. Mark though wouldn’t reveal everything. “Some of the stories were too horrific.”

One is worth mentioning.

The late fall in both Asia and Europe was pivotal for the Allies. As Patton’s 3rd Army was smashing through France in pursuit of the ultimate goal in Berlin, the Marines were slogging through surf and swamps, methodically destroying an army that would not give up.

By November, the American brass decided to launch an assault on Peleliu. In a way, the tiny coral island symbolized fighters like Bob Ellis. Small, but tenacious and hard, the bit of land in the vast Pacific was about to test American forces in dramatic ways.

It didn’t help that the commander of the 1st Marine Division, Major General William Rupertus, thought it would take only four days to secure the island.

In all, it would take two months, one week, and five days to dislodge Japanese forces. Estimates had only been off 68 days!

In the midst of this gruesome challenge, Bob Ellis waded through with the rest of his Marines. It would become the costliest invasion of the Pacific Theatre, and historians would question the strategic value. Still, American forces performed superbly. The 40,000-plus invasion force faced off against around 11,000 Japanese.

Early on September 15, 1944, the Americans landed. What they didn’t know is that the Japanese had changed tactics: no longer would they try to stop the invasion cold on the beaches. Now they would offer token resistance, then retreat deep into well-defended jungle emplacements.

It was here that the stage was set for many nights of fitful sleep for Bob Ellis.

“Dad said that twice on the island, they ran out of ammo and until reinforcements could arrive, they threw empty ammo cans and volcanic rock at the Japanese,” Mark remembered. “Then it was hand-to-hand.”

The images of charred Japanese, incinerated by flamethrowers, were burned-into Bob’s brain. He saw so much death that the images never totally went away.

At the end, almost every Japanese soldier was killed; they fought to the death. The fighting ended with an American victory on November 27, 1944—four days after Thanksgiving.

Bobby Ellis traveled to Harrison, Arkansas, to enlist. He came home three years later as Bob. Circumstances shoved him into a meat-grinder in the formative years of his life, and he could never quite shake it. He died in 1995 and Mark passed in 2019, and with him, Bob’s nightmares came to an end.

That’s one big reason a grateful nation remembers him and many others who gave all.