This is why General Schwarzkopf wore two watches 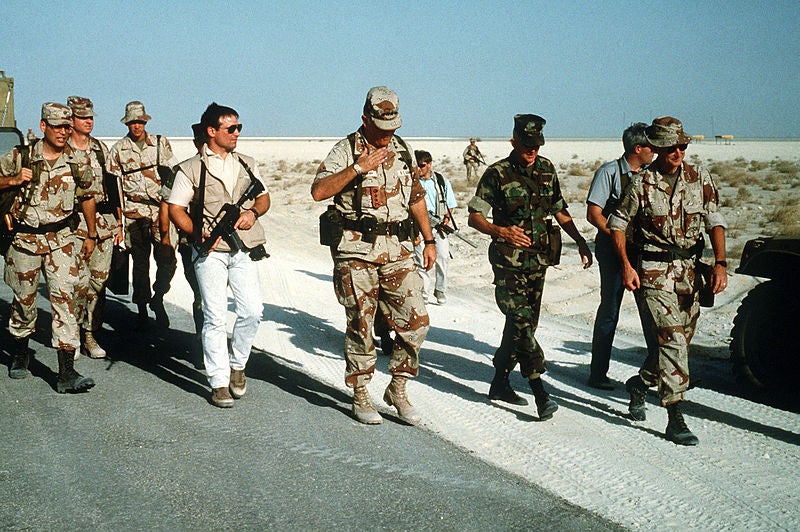 The idea of wearing two watches today seems like an unnecessary bit of showing off. In fact, with the prominence of smartphones and smartwatches, the idea of wearing a traditional time-keeping device on your wrist sounds entirely antiquated. For General “Stormin’ Norman” Scharzkopf, however, the 1991 Gulf War necessitated the wearing of two wristwatches.

“I always wore two watches during the [Gulf] war. The one on my left arm was set on Saudi Arabian time and the Seiko on my right arm was set on Eastern Standard Time. That way I could quickly glance at my watches and instantly know the time in both Saudi Arabia and Washington, D.C. Sincerely, H. Norman Schwarzkopf, General, U.S. Army, Retired.” General Schwarzkopf penned these words in a letter to the Antiquorum auction house in the late 1990s when he donated one of his personal wristwatches to a charity auction.

Listed as “Seiko ‘Desert Storm, Diver’s watch,’ No. 469576 Stainless steel, centre second, water-resistant to 150m. gentleman’s quartz wristwatch with day and date, rubber strap and stainless steel buckle”, the donated watch was most likely a Seiko Quartz reference 7549-700F. While the watch is commonly believed to be the venerable Seiko SKX009 made famous by Robert Redford in All is Lost, the detail of the quartz movement rules out the SKX and its iconic automatic movement.

General Schwarzkopf’s second wristwatch is a bit more of a mystery. Though his letter to the auction house described the watch on his right wrist as a Seiko, the General is pictured wearing both watches on opposite wrists at different times. This makes it unclear if the Seiko in the letter refers to the dive watch sold at auction or this mystery second watch.

At first glance, the two-tone gold and stainless steel construction gives the impression of a Rolex Datejust which was extremely popular during that time. However, upon closer inspection, the bracelet appears to be a 3-piece link design like the Rolex President rather than the 5-piece design of the Datejust’s Jubilee bracelet. The links are also too small to be a Rolex Oyster bracelet. However, the Rolex President has only ever been made in solid gold or platinum. Being that the General’s watch sports a two-tone bracelet and case, this rules out the Rolex President. Instead, it’s more likely that the watch in question is another Seiko like the model 3E23-0A60. Although it’s billed as a ladies watch, the Seiko fits the bill of having a two-tone gold and stainless steel construction and a matching President-style bracelet.

While it’s not terribly popular across society as a whole, the act of wearing a wristwatch on both wrists has become a practice known as “Schwarzkopfing” by the internet watch community. That said, even amongst watch enthusiasts, the “Schwarzkopf” is not a common sight.

It is also worth noting that Fidel Castro employed a similar practice. The Cuban dictator famously wore two Rolex’s on the same wrist. Like with General Schwarzkopf, the practice is attributed to Castro’s need to track multiple time zones. However, one of Castro’s watches was a Rolex GMT-Master which is famous for being able to track up to three time zones. Perhaps the dictator needed to keep track of the time in Cuba, Nicaragua, Moscow and Angola. It’s also worth noting that, at the time, Rolex was a utilitarian brand that made reliable tool watches rather than the luxury status symbol that it is today.

In a way, General Schwarzkopf’s practice of wearing two watches has returned to the military. Front line troops will often wear a G-Shock watch on one wrist to keep time and a Garmin GPS watch on the other to track their grid. Very few service members will reach the rank of four-star General, but if you ever want to imitate one, pull a Schwarzkopf and throw on two watches. Just be sure to put them on different wrists. No one wants to imitate Castro.