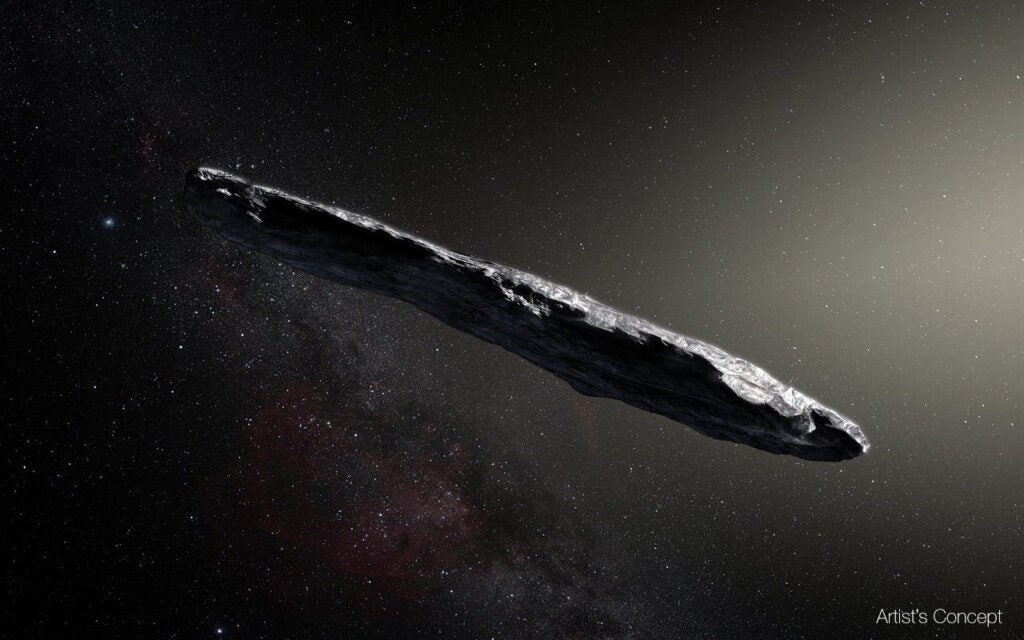 An asteroid is a rocky object in space that is smaller than a planet. Meteoroids are space rocks that are smaller than asteroids and can range from the size of a grain of dust to a large boulder. When a meteoroid enters Earth’s atmosphere and burns up, it becomes a meteor. Larger meteoroids can sometimes survive the passage through Earth’s atmosphere before completely burning up and scatter debris that makes it to the planet’s surface. When this happens, they become meteorites. With these definitions established, the U.S. Space Command confirmed that a 2014 meteor was the first recorded interstellar object to enter Earth’s atmosphere.

In October 2017, scientists discovered what was believed to be the first interstellar object to enter our solar system. The object, named 1I/’Oumuamua, was about 400 meters long and likened in shape to a fire extinguisher. While the origin of the unique object was most likely from outside the solar system, Dr. Amir Siraj and Dr. Abraham Loeb of the Department of Astronomy at Harvard University determined that an earlier meteor was actually the first interstellar object in our solar system.

In 2014, a meteor designated CNEOS 2014-01-08 streaked across the sky near Manus Island, Papua New Guinea. At only 1 meter across, the meteor mostly burned up with very few meteorites scattering over the Pacific Ocean. The meteor was observed and added to a public database by NASA and the DOD. After eight months of studying ‘Oumuamua, Siraj and Loeb looked into this database and realized that the 2014 Manus Island meteor could be an even earlier interstellar object.

Based on scientific research, a celestial object traveling faster than 42 kilometers per hour may have originated from outside the solar system. With the 2014 Manus Island meteor hitting the Earth’s atmosphere at around 45 kilometers per second, Siraj and Loeb were confident about their finding. Certainty was increased after the duo conferred with other scientists. However, the accuracy of the government-collected data could only confirmed by an anonymous source through a private conversation. To make their finding official, Siraj and Loeb needed an official memo.

In 2022, the scientists got the official recognition they were seeking. On March 1, US Space Force Deputy Commander Lt. Gen. John E. Shaw signed a memo addressed to NASA confirming Siraj and Loeb’s findings. The memo was also signed by Dr. Joel Mozer, Chief Scientist of the Space Force’s Space Operations Command. “I had the pleasure of signing a memo with @ussfspoc’s Chief Scientist, Dr. Mozer, to confirm that a previously-detected interstellar object was indeed an interstellar object, a confirmation that assisted the broader astronomical community,” read a tweet by US Space Command.