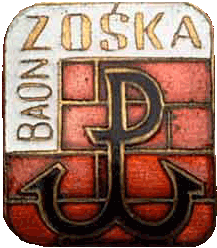 In the summer of 1944, the Red Army was approaching Warsaw and Nazi Germany was preparing to retreat all along the Eastern Front. That’s when the Polish Resistance launched Operation Tempest, an all-out effort to shake off five years of Nazi occupation before the Germans could destroy the city or round up dissidents.

For 63 days, Poles fought their occupiers in the streets of the Polish capital in the largest European resistance uprising of the war. Although the effort ultimately failed when the Soviets stopped their advance to allow the Nazis to crush the resistance, there were bright spots.

The brightest being the liberation of the Gęsiówka Prison by the Zoska scouting battalion — essentially a hardcore group of eagle scouts — who kept the Nazis from liquidating the Jewish population there.

Members of the Polish Home Army, the main resistance force in occupied Poland during World War II, started the Warsaw Uprising on Aug. 1, 1944. Almost immediately, members of the Nazi SD, the intelligence arm of the SS, began to liquidate the Warsaw Concentration Camp known as Gęsiówka.

To prevent them from finishing their dirty work, a group of teenage Polish scouts known as Battalion Zoska, organized an assault on the camp and its guards. The battalion wasn’t exactly what Americans would call Eagle Scouts, but it’s the closest description that fits. They were more than eagle scouts, but not quite a military unit.

Still, these young scouts had been fighting Nazis as resistance fighters and partisans since 1942, so they had a lot of time to learn. When Operation Tempest was launched, Zoska had 520 soldiers in Warsaw. On the second day of fighting, Battalion Zoska captured a Nazi panzer tank and integrated it into their attack plan for Gęsiówka.

With their new armored platoon, Battalion Zoska began its assault on the concentration camp on Aug. 5. The Nazis were no match for the hardened eagle scout paramilitary force. The full force of Battalion Zoska descended with ferocity on the camp guards. Almost 500 Polish teenagers supported by the main gun of a panzer tank made for a formidable force.

Within 90 minutes, the Germans broke off their defense of the camp. Those who survived the Polish attack (there weren’t many) were scattered into the city or took refuge in a nearby prison still held by the occupiers. The attacking Poles lost only two men in the fight.

Thousands of Polish Jews died in the days leading up to Battalion Zoska’s attack on Gęsiówka., but there were still 348 Jewish prisoners still alive in the camp after it was liberated. The Zoskas armed them and they joined the rest of Warsaw’s citizens in fighting Nazis to the death.

The Warsaw Uprising would go on for another nine weeks as the Red Army looked on, hoping the Germans would crush the Polish resistance. Most of the liberated prisoners would die in the fighting, as would most of Battalion Zosk — 70% died in the Warsaw Uprising.

Those who survived the Nazis were imprisoned in the Gęsiówka camp and other secret prisons by the communist regime in Poland.

Today, the prison has been replaced by a  museum dedicated to the history of Poland’s Jewish people and a plaque honoring the Polish Jews who died in the camp, along with a memorial to the Polish Home Army and to Battalion Zoska.