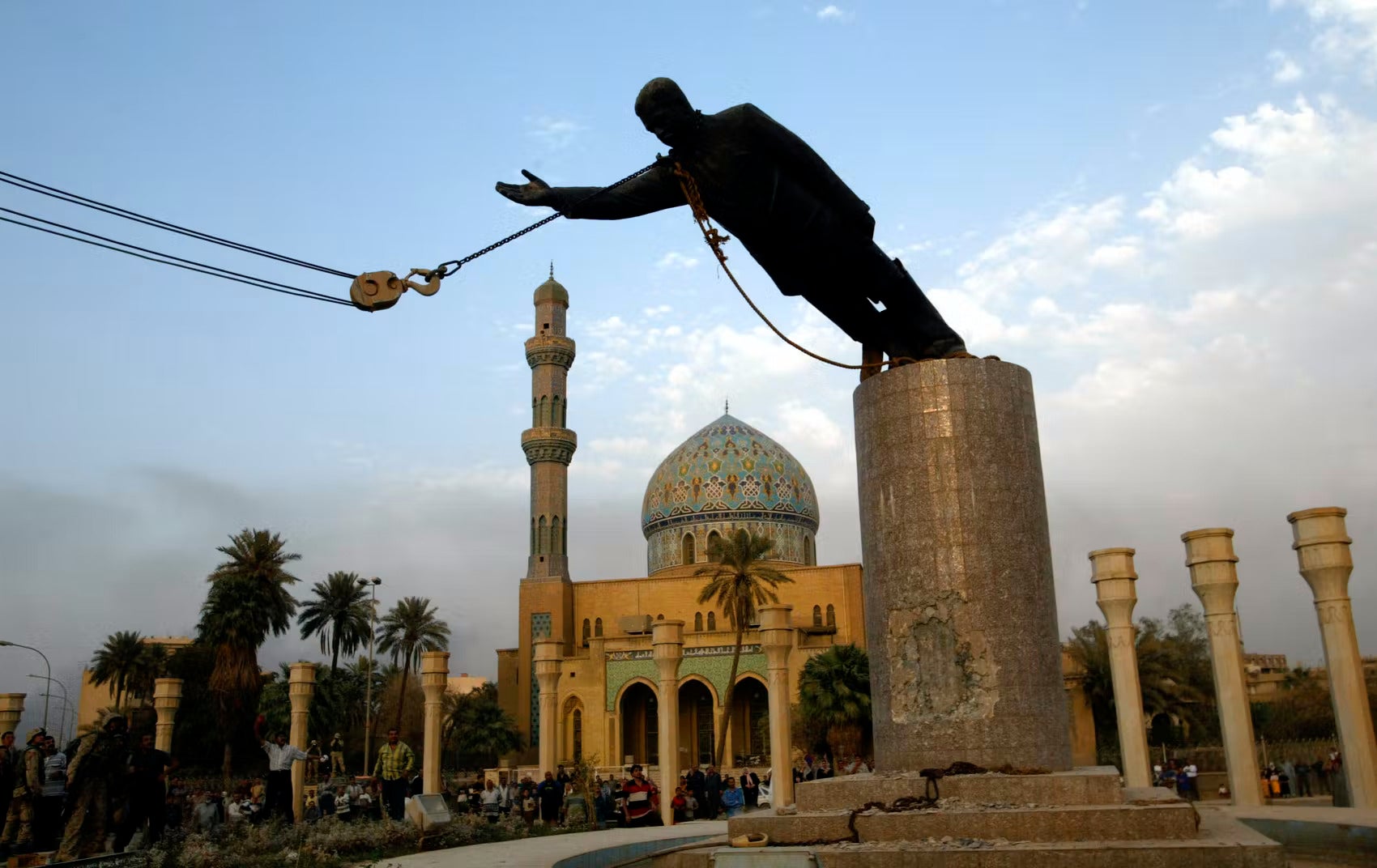 Statue of Saddam being toppled in Firdos Square after the invasion.

Two-thirds of the world live under a dictatorship, yet we know very little about dictators. We assume that all dictators and dictatorships are the same, but this is not the case. Some dictators step down from power peacefully, while others cling to power until the very bitter end. The fate of a dictator after removal from power depends on many things and may not always be certain. The one thing that is certain is that change will occur after they have been removed from power.

Saddam Hussein was a savage autocrat and public enemy of President George Bush. For 25 years, the sadistic tyrant ruled Iraq with utter contempt for humanity. He was, in fact, compared to Hitler as his cruelty knew no limits. When he was removed from power, the people of Iraq felt relieved of the aggressively violent dictator. He knew he would be executed soon after, but he sat back, smiled, and smoked his cigar with thrill. His murderous quest to dominate the Arab world was coming to a humiliating end, yet he showed no concern. The irony is that he was jailed in a prison he himself designed. When the time to execute him came, he bathed, prayed, had a chat with one of the guards then he was escorted to the execution point.

Benito Mussolini ruled Italy from 1922 as the Prime Minister and a few years later as dictator. To his audience, Benito Mussolini would seem almost magical. He would suck people into his thinking with bravado. His now funny gestures were serious business at the time. It was believed that Mussolini left the people of Italy bewitched with his words. However, behind his boast and attitude was a dark heart of barbarity and brutality. Adolf Hitler saw him as someone who could provide a blueprint for destroying the old order, making the two friends. Mussolini was subject to an execution which went down in the history books as one of the most brutal events of the second world war.

Although Hitler idolized him, his death and execution reinforced the desire to take his own life in Berlin rather than be made a public spectacle. When Mussolini was arrested, he spent the night near bites and barracks before reuniting with his mistress early in the morning. Intense fighting was going on around his prison, and he believed he would be rescued again by his supporters. It was then announced on radio Milano that Mussolini had been captured, with a partisan leader stating an execution platoon would be too much of an honor for him. The partisan leader claimed he deserved to be punished like a mangy dog. When his death sentence was agreed on, Mussolini and his mistress were transported from where he was imprisoned to a village named Julinia De Mesagra.

The two were asked to stand against the wall of a villa, after which they were shot with a submachine gun. How he acted during the last moments of his life after realizing he would be executed is unclear. Some believe he was sorrowful and regretted his actions, but the most famous version is that he was ready and even requested the shooter to aim at his heart. After the shooting, his body and that of the mistress were taken by Vanta Milan and dumped in Piazzi Loretto, a major market square within Milan. This was a payback for the 15 partisans who had earlier been shot there and their bodies left to rot in the same place.