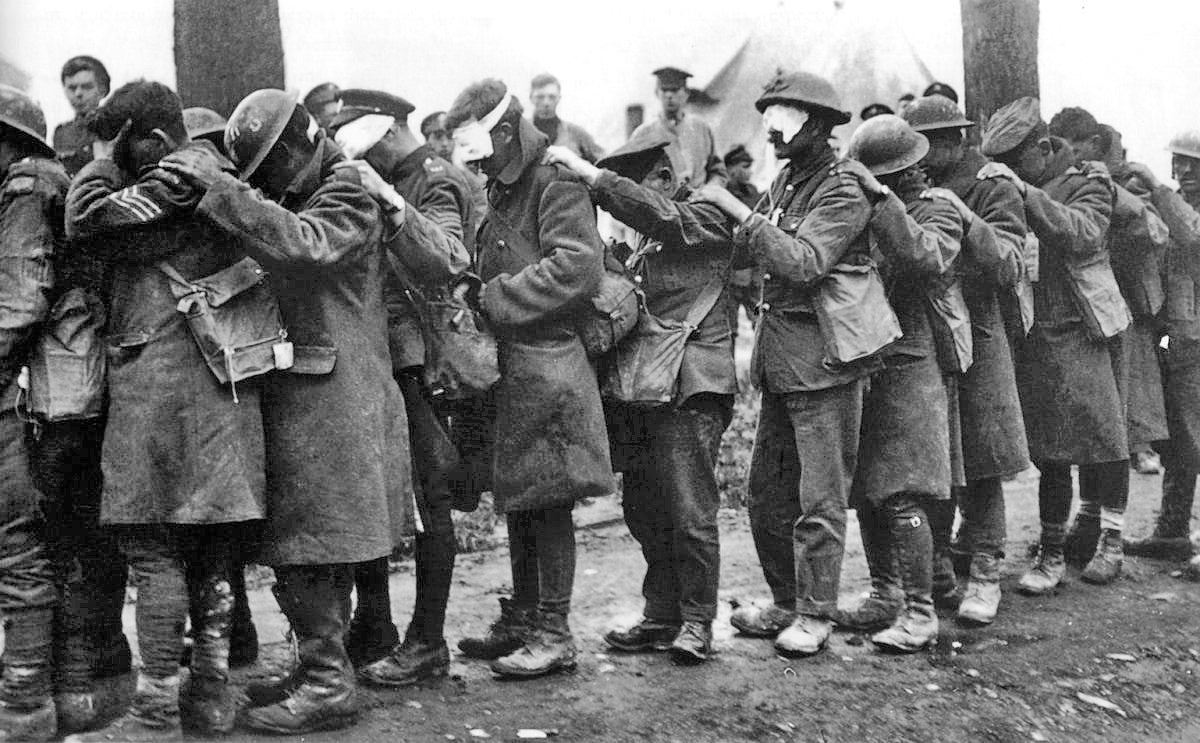 British 55th (West Lancashire) Division troops blinded by tear gas await treatment at an Advanced Dressing Station near Bethune during the Battle of Estaires, 10 April 1918, part of the German offensive in Flanders.

Total war is a combat technique where armies utilize any means necessary to conquer their enemies using brutal tactics, including those regarded ethically or morally inappropriate. Total war is aimed not only at devastating but also undermining the rival beyond salvage so they are literally obliterated. Total war is fought without restrictions on weapons or targets.

Total wars have happened throughout warfare history, including the Mongol Invasions, the Third Punic War, the two World Wars, and the Crusades. The objective is to eradicate the enemy’s resources to make it impossible for them to continue with the war. This involves targeting central infrastructure and frequently restricting access to the internet, water or imports through blockades.

In a nutshell, when it comes to the brutal tactics of total war, there is no restriction on the kind of weapons utilized, whether nuclear, biological or chemical.

Genocide was a typical worse form of brutal tactic incorporated in the Mongolian total warfare. This brutal tactic was cruel since it is believed that the Mongols exterminated close to 11% of the world’s population. The Mongols were very ruthless, and they not only crushed their enemies, cities and empires but also wiped out every man, woman or even child.

Panic spread everywhere after simply hearing about the potential of an attack by the Mongol group. When the Mongols attacked Zhongdu, now Beijing, close to 60,000 women committed suicide in the horror of the Mongols’ brutality. After the Mongols broke through the gates of Zhongdu, they butchered about 100,000 people and set the city on fire.

This brutal tactic made the Mongol military armies more competent victors and enabled them to move troops in places they mainly were needed, further prompting rapid expansion.

Brutal Tactics of the Japan Firebombing

One of the most unforgettable, destructive, and brutal wars ever witnessed by humans was the Pacific Theatre of World War II. The Japanese Navy and Army were ruthless and famous for fighting to their last breath — the last standing man, or even committing suicide for their failure.

With this knowledge, the American military and scientists knew that they had to annihilate the Japanese because they would not surrender. Since the atomic bomb was still Top Secret, the United States military devised a plan to bring down Japan’s wooden cities by establishing a new accelerant incorporated in bombing missions. The substance, which was jellied gasoline, would enable the explosives to spread fire throughout a wooden city rapidly and more powerfully. The bombs were eventually dropped in 1945 on Tokyo, and the resulting fire took down half the town and killed approximately 100,000 civilians in only one night.

The World War I era was a challenging time, especially on the western front where living with decomposing bodies, rats feasting on the dead, and casual weaponry explosions was a norm.

At that time, gas was a very effective brutal tactic used as a psychological weapon. The German Empire began adding salt to this injury by using a toxic gas, a very destructive, element of brutal tactics. The chlorine gas changed the water in the airways to hydrochloric acid, which prompted mustard gas to blister the throat and lungs, disfiguring many people.

Chemists allied to both sides started experimenting on other gas weapons after Chlorine proved effective in incapacitating the enemy. This led to the invention of phosgene, a chlorine-based gas. Phosgene gas killed those who inhaled it silently, sometimes taking hours or even a few days.