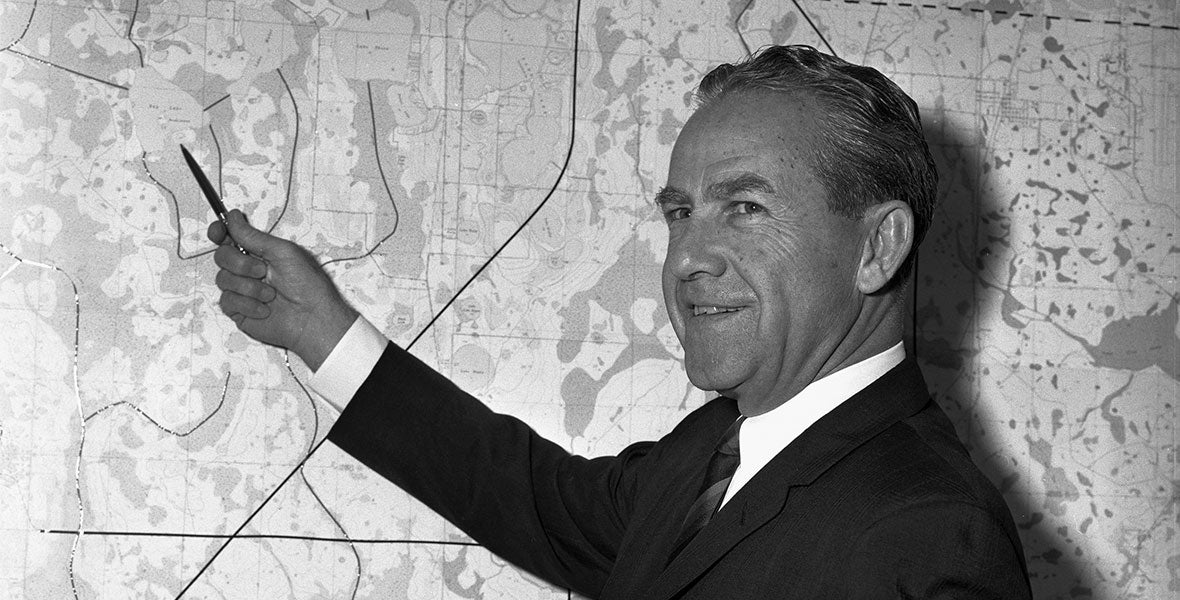 Walt Disney famously said that, “It’s kind of fun to do the impossible.” He accomplished this in 1955 with the opening of Disneyland in Anaheim, California. While creating a clean, fun, and family-inclusive amusement park was quite the feat, the orange grove farmland that the park was built on was not nearly as much of a construction challenge as he faced with his next park.

Following the success of Disneyland, Disney looked to expand to the east coast. Seeing how Disneyland quickly became surrounded by cheap motels and restaurants that detracted from the magic he worked so hard to create in the park, Disney knew he needed lots of land. He also wanted year-round sunshine to operate the new park without adherence to seasons. After extensive scouting and research, Disney chose central Florida to build his Magic Kingdom. Of course, the region posed a new type of problem: how do you build a theme park in a swamp?

Much of the land secretly acquired by the Walt Disney Company for the park was, in fact, swampland. Moreover, the massive park and community envisioned by Disney needed the infrastructure to sustain it; sewage, power, water, it would all need to be built in less than ideal terrain. Luckily, Disney found just the man for the job.

William “Joe” Potter was born on July 17, 1905 in Oshkosh, Wisconsin. In 1928, he graduated from the United State Military Academy at West Point. Potter’s first assignment as a Lieutenant was with the First Engineers in Washington, D.C. He was then assigned to the Nicaragua Canal survey from 1929 until 1932. Afterwards, Potter continued his education with the Army and earned a degree in Civil Engineering from MIT in 1933. He returned to academia and served as a professor of military science and tactics at Ohio State University from 1937 to 1940.

During WWII, Potter served an engineering officer at the Supreme Headquarters of Allied Powers in Europe. Leading up to the invasion of Normandy, he worked on the logistical planning that helped ensure the invasion’s success. Afterwards, he directed the necessary movement of men and materials across Western Europe to sustain the invasion; a massive logistical operation that became known as the Red Ball Express.

After the war, Potter returned to Washington, D.C. where he served as assistant chief of engineers for Civil Works and Special Projects. In 1956, President Eisenhower appointed Potter as governor of the Panama Canal Zone. There, he was responsible for a community of 40,000 people and oversaw services including military, public health, safety, and education. At the end of his tenure as governor, and 38 years of Army service, Potter retired as a Major General in 1960. However, it’s hard to keep an old soldier down.

In 1964, Potter became executive vice president of the 1964-65 New York World’s Fair. In that position, he was charged with the construction of 26 state attractions and the $17-million United States pavilion. It was during the World’s Fair that Potter met Disney who was looking for someone with his expertise. Disney hired Potter straight out of the World’s Fair in 1965 to help on the Florida project.

Alongside fellow flag officer Admiral Joe Fowler, Potter oversaw the construction of the entirety of Walt Disney World’s infrastructure. Following Walt Disney’s death in 1966, Potter worked closely with Disney’s brother, Roy, to complete the Florida roject in 1971. He turned 300 acres of swampland and forest into the Magic Kingdom, while simultaneously preserving the area’s natural ecology. The drainage canals that surround the property and make the part possible are even known as “Joe’s ditches.” Former president of Walt Disney Attractions Nick Nunis told the Orlando Sentinel, “Joe was a man Walt Disney was very fond of. Without Joe Potter there would be no Walt Disney World today.”

Potter stayed with the Disney Corporation and served as vice president for EPCOT Planning and senior vice president of Walt Disney World Co. In short, he was responsible for the construction, operation, and administration of the entire Florida project. Potter also served as president of the Board of Supervisors of the Reedy Creek Improvement District, which was formed by the Florida Legislature to provide the public services necessary for the tourist and residential population at Walt Disney World. Serving as a liaison between the park and surrounding communities, Potter earned the nickname “Mister Disney.”

In 1974, Potter made his second and last retirement. He remained in Orlando until his death in 1988. In 1997, Potter was made a Disney Legend for his significant contributions to the company. He was also honored with a window on Main Street, U.S.A. in Magic Kingdom and had a Seven Seas Lagoon ferry re-christened as the General Joe Potter in his memory. From his military career, Potter earned the Distinguished Service Medal, the Legion of Merit, the Bronze Star, and the Croix de Guerre. However, his most lasting legacy mighty be the Magic Kingdom he helped Disney build in the middle of a Floridian swamp.