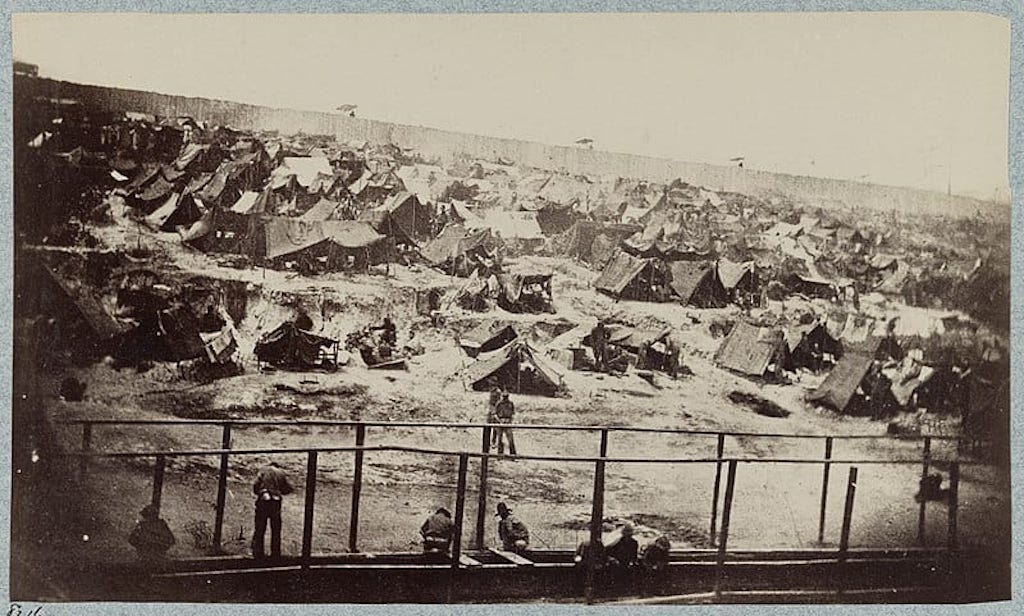 Camp Sumter during the Civil War.

Prison dungeons have been in existence since the medieval days and were used to hold lawbreakers just like today. There can never be a lack of lawbreakers whenever laws are involved, and such people have always been confined in prisons.  As the years pass, facilities come and go, but the most notably terrifying historical jails tend to shadow our record books with accounts of horrific agony, bloodshed, and criminality. They helped in war operations, influenced uprisings, and influenced the history of the regions and nations around them.

Prisons, as we understand them presently, are a comparatively recent notion. In ancient times, prison dungeons were more of limbo than a place of repentance before the final ruling of crime, which was frequently penalized by slavery or death. Ancient prisons ranged from uninhabited islands to subterranean dungeons before today’s gigantic prisons and super-maxes.

Andersonville, a military jail complex located in Camp Sumter, was the biggest Confederate detention during the Civil War. It was constructed in February 1864, particularly to house Union soldiers. Up to 13,000 of the 45,000 prisoners imprisoned there throughout the war died. The prison was constructed to accommodate the increasing number of Prisoners of War in the Richmond area. Unfortunately, starvation, poor hygiene, illness, and overpopulation claimed the lives of nearly 1,000 people every month.

The jail pen was enclosed by 17-foot-high hewed pine logs and was expanded a few months after the prison launched. There were about 90 feet between sentry stations about 19 feet from the walls. Soldiers were commanded to kill any convict who climbed over the fence, which comprised a pole and a fence. Only one source of water was available for the prisoners, making it difficult to survive.

Mongolian jails are infamous for their horrible circumstances and harsh penalties, even in the current times. Although the country has progressed since 1990s, its criminal justice system remains mired in the past. The weakest elements of civilization are now being treated unfairly, with hefty sentences being handed down for seemingly trivial offenses.

The problem is that these institutions are even riskier than traditional prisons for convicted offenders. A youngster was sentenced to seven years in prison in 2008 for shoplifting a box of candy and a bottle of wine. More than half of the captives suspected of crimes in Mongolia’s capital were held without a court order. Amnesty International published a report on Mongolian prisons in 2002 detailing the torture and abuse of prisoners. A detainee’s death from starvation is not uncommon in this prison.

The British utilized the HMS Jersey as a detention ship during the American Revolutionary War. This surroundings were so awful that the ship was dubbed HMS Hell. The HMS Jersey was launched in 1736 and saw action in various engagements throughout the 18th century. In 1771, it was turned into a medical care ship, then a jail ship in the early 1780s. Abandoned warships were useful in keeping prisoners by British troops occupying New York during the war.

They not only imprisoned rebels but also punished those who rejected the British Crown’s pledge of loyalty. An approximated 11,000 people died on these ships from hunger or sickness. Despite this bleak background, the HMS Jersey was notorious for its deplorable standards.

Republicans saw the HMS as the most horrifying thing, as it was nicknamed, as a striking emblem of British tyranny. The detainees were subjected to the extreme heat that they stripped naked, and corpses remained uncovered for up to ten days in some instances. It was possible to be devoured alive by rodents if you endured the other atrocities.