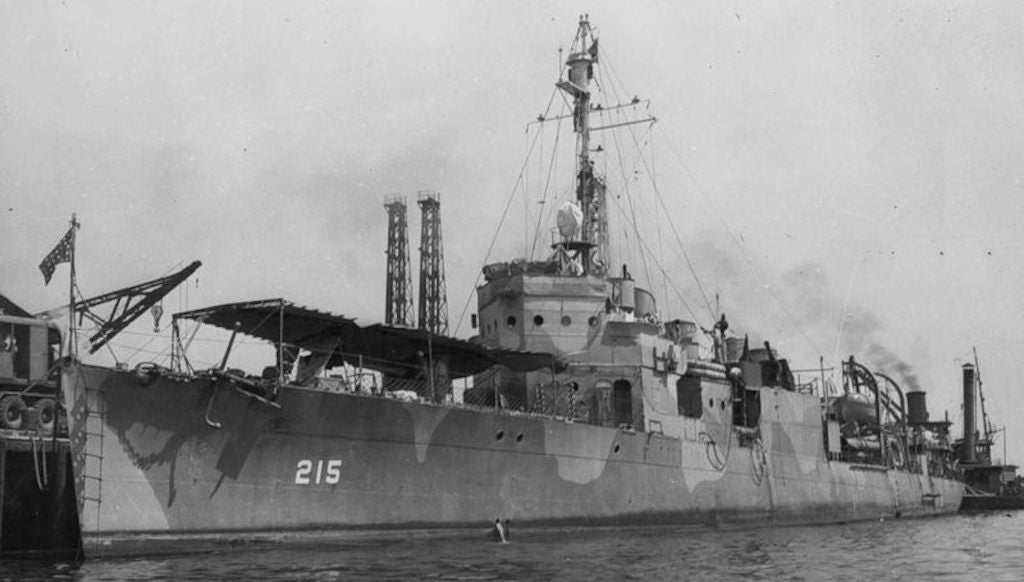 The USS Borie was one of the U.S. Navy’s most aggressive anti-submarine ships in World War II. It was first commissioned in 1919, so by the time World War II came around, it was already pretty old. Its age did nothing to hamper the tenacity of the crew or its mission.

That mission and its tenacity would be its ultimate undoing, but not at the hands of the enemy – the USS Borie went after submarines so hard, it would end up literally landing on one, placing the two crews in close combat and forcing the Navy to scuttle the destroyer.

In October 1943, the USS Borie was out on its fourth patrol of the war, looking for German U-boats in the North Atlantic. They got word that a large group of enemy submarines were taking on fuel somewhere near a tanker sub. The Navy was able to get a general bearing on the tanker and the submarines looking for fuel using high-frequency radio finders.

USS Borie moved in on the area and arrived in the early evening. The ship’s first radar contact was with U-256. Borie moved in on the sub as it crash-dived, making a steep angle below the waves as quickly as possible, in the hopes of avoiding the Borie. But it was too late. The destroyer dropped two depth charges, which forced U-256 back to the surface.

Again trying to make an escape, U-256 crash-dived once more and Borie was on top of it with a third depth charge. After this third attack, there was nothing for some time. The captain and crew of the Borie soon noticed an oil slick welling to the surface. Assuming U-256 had been destroyed, the Borie moved on.

In reality U-256 had escaped, but only barely. It was heavily damaged and somehow managed to limp back to its home port. The crew of the Borie would have no way of knowing that, given the oil slick they’d observed. So they moved on to another radar target with their morale high after a victory at sea.

This time the target was U-405, and neither of the two crews had any idea that this encounter in the North Atlantic would be the last for both ships and the last for some of its crews. In the early morning hours of Nov. 1, 1943, USS Borie picked up a radar contact and moved in for the kill. The winds were high and visibility was poor, but the destroyer soon had it on sonar as well. U-405 could not get away.

In 15-foot seas, the Borie launched its depth charges. The weapons forced the German submarine to the surface, where the two ships began going at it head on. The destroyer began lighting up the sub with 20-millimeter gunfire at 400 yards. U-405 fired back with its own 20-millimeter autocannons, peppering the Borie’s forward engine room.

The submarine’s crew raced toward its deck gun, preparing to fire its 88-millimeter cannon at the Borie’s hull. Borie was faster, though. Its 20-millimeter guns spray the submarine’s deck, killing its gun crews before the destroyer popped off three rounds of four-inch shells, blowing the deck gun off the sub’s deck. Borie moved to ram the sub as fast as it could.

As the Borie approached, a massive wave caught the destroyer’s bow as the submarine turned hard to port. The combination of movement lifted the USS Borie out of the water, onto the submarine’s foredeck. With the destroyer literally sitting on top of the submarine, the two crews came out fighting. An exchange of small arms followed in the darkness of the early morning as they both tried to free themselves from each other.

Being below the destroyer’s biggest guns actually kept U-405 from being destroyed, as the Borie could not bring its guns to bear. Every time a German submariner came topside to try to man the deck’s weapons, the crew of the Borie gunned them down.

By the time the two ships separated, the submarine had lost most of its crew and the Borie was heavily damaged. After pretending to let the submarine slink away, the Borie fired off its depth charges. That was too much for the sub’s crew who finally abandoned ship. The Borie, though victorious, was so heavily damaged, she was scuttled at sea the next day.