Why FDR imprisoned 125,000 Japanese Americans on US soil - We Are The Mighty

Why FDR imprisoned 125,000 Japanese Americans on US soil 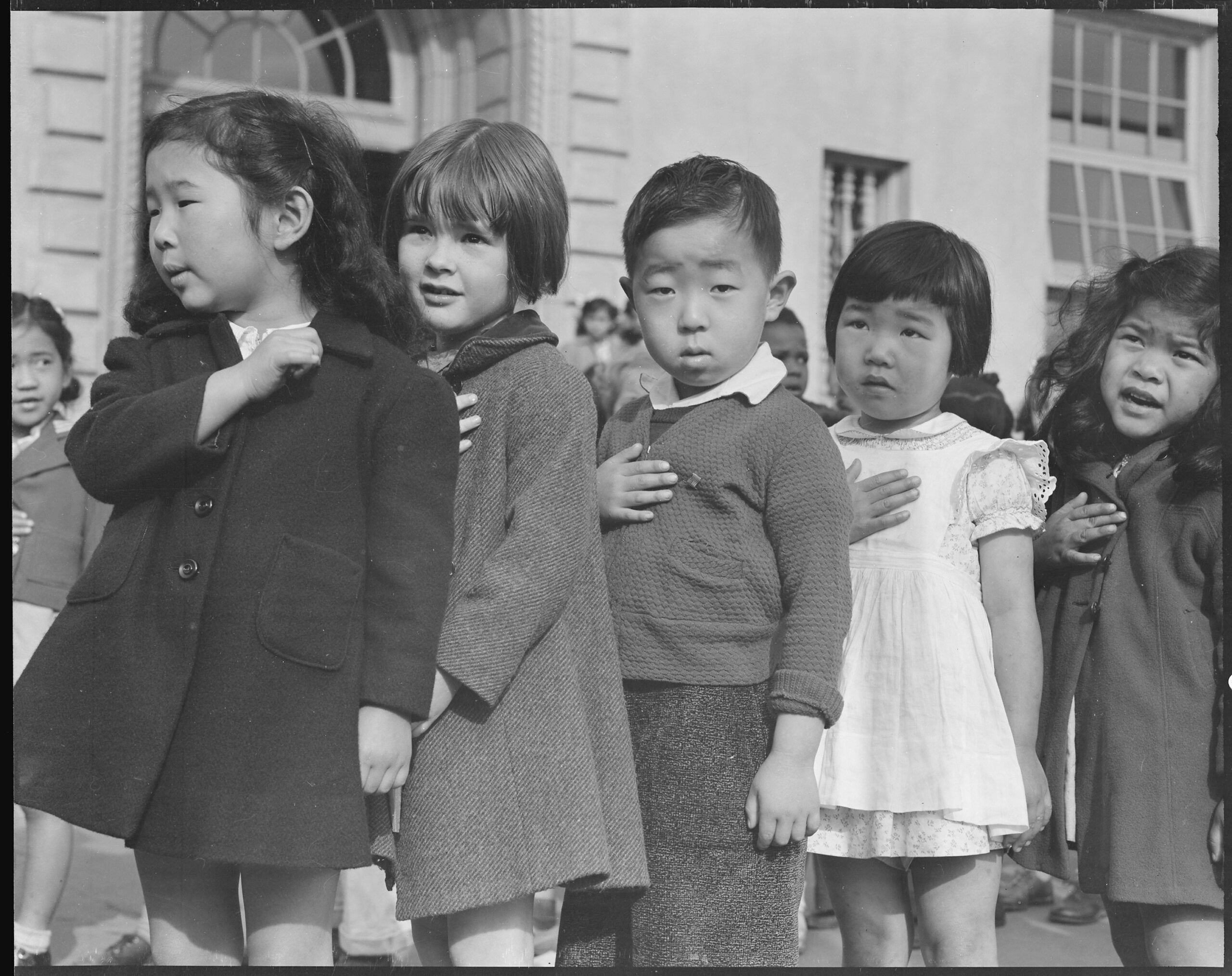 Original caption: San Francisco, California. Many children of Japanese ancestry attended Raphael Weill public School, Geary and Buchanan Streets, prior to evacuation. This scene shows first- graders during flag pledge ceremony. Evacuees of Japanese ancestry will be housed in War Relocation Authority centers for the duration. Provision will be effected for the continuance of education. (Densho Digital Repository).

There’s a long-standing, often forgotten atrocity that occurred in our country: the imprisonment of our own citizens during WWII. Perhaps you’ve heard about the internment of Japanese Americans during WWII. But what you might not know is that even the term “internment” carries a connotation not worthy of extending to this situation. Internment implies basic civic liberties, freedoms and rights extended to Prisoners of War granted through the Geneva Convention. But the Geneva Convention POW statutes were passed after-the-fact, in 1949/1950. The best way for history to repeat itself is to forget our past, to not teach it to our children and to not acknowledge our own mistakes as a nation. It’s imperative we remember, we learn and we commit to never again letting such cruelty occur on American soil.

Following the attack on Pearl Harbor, President Franklin D. Roosevelt passed Executive Order 9066 which led to the imprisonment of over 125,000 Japanese Americans on U.S. soil (over half were American citizens).

From 1942 – 1945, they were held – incarcerated – in “camps,” simply because of their heritage. Americans were forcibly removed from their homes and held in isolation, an effort driven out of fear. Surrounded by barbed wire, issued uniforms, and given strict limitations on what they were able to do, these prisoners – who had done absolutely nothing wrong – had little explanation of what was happening and no civil rights. These weren’t camps; they were prisons. While it’s commonly reported that the military zones were California, Oregon and Washington – all states with large populations of Japanese Americans at the time – there were actually far more detention centers that saw prisoners across the United States and throughout Hawaii. This interactive map created by Densho details the various Sites of Shame.

Densho was started in 1996 by Japanese Americans whose parents and grandparents had been incarcerated during World War II. These Americans realized they were beginning to lose their elders who experienced this history firsthand, and they needed to act to preserve their stories. “Densho” is a Japanese word that means to leave a legacy, or to pass something down to the next generation, so what really drives the organization is working to make sure that our history is not forgotten, that we are equipping future leaders with the knowledge and the empathy to create a more just world.

WATM sat down with Densho to discuss the importance of understanding these camps and what they’re doing to ensure history doesn’t repeat itself.

WATM: What were the biggest challenges for the organization starting out compared to what challenges you face now?

Initially, it was a big challenge to get survivors to open up about their experiences. This was an incredibly traumatic experience and many people were reluctant to even talk to their own children about it. But understanding that we are preserving these stories to pass them down to future generations — to help educate people about the importance of protecting our civil rights and standing up to racism, xenophobia, and scapegoating — made them want to share their stories. Many of the survivors we’ve interviewed say their motivation in talking about what happened to them during WWII is to make sure that something like that never happens to anyone else.

Twenty-six years later, one challenge Densho and other Japanese American history organizations are facing is that there are far fewer survivors who are still able to tell their stories. We feel a huge responsibility to keep their memories alive, which is why we work hard to bring this history to classrooms, social media, public events, and other places where we can engage new audiences and draw connections between past and present. We’ve also worked with artists, authors, and filmmakers on projects centered around Japanese American history, and even launched a podcast about the incarceration experience in 2020.

WATM: What was your biggest victory to date?

It’s hard to single out a “biggest victory!” A recent project we’re really proud of is Sites of Shame, a digital mapping tool that traces the journeys of Japanese Americans who were incarcerated during World War II. Using new research and government records, we were able to map out nearly 100 sites where Japanese Americans were detained and show where they lived before the war, which camps they were sent to, and where they went after incarceration. Many people don’t realize that there were several different types of camps, some of which were run by the Army or the Department of Justice, and that these camps were spread out across the entire country — so Sites of Shame helps visualize where this history took place and really gives a sense of the immense impact these forced removals had on people’s lives.

WATM: What would be the best way for the public to support Densho and its mission?

Share our archives and educational materials, follow us on social media, and donate to support our work if you can!

WATM: What’s next for you and Densho?

We recently relaunched our oral history program, after having to stall new interviews for the first year-and-a-half of the pandemic. These latest interviews are focused on the period immediately after WWII, when Japanese Americans were released from the camps and had to rebuild their lives, in many cases starting over with next to nothing. It’s our hope that these stories will help shine a light on the aftermath of the incarceration and how it continued to impact Japanese American communities long after the camps closed.

Thousands of Japanese Americans served in the U.S. military during World War II, and we’re grateful to all the veterans and their families who have shared their testimonies and personal collections with us. We have many oral histories, photos, and other artifacts featuring Nisei (second generation Japanese Americans) who were part of the 442nd Regimental Combat Team, the most highly decorated unit of its size in military history, as well as the Military Intelligence Service. Many of these young men volunteered or were drafted out of incarceration camps, and served while their friends and families remained imprisoned.

We encourage anyone interested in military history to explore the stories of these Nisei soldiers in Densho’s digital archives.