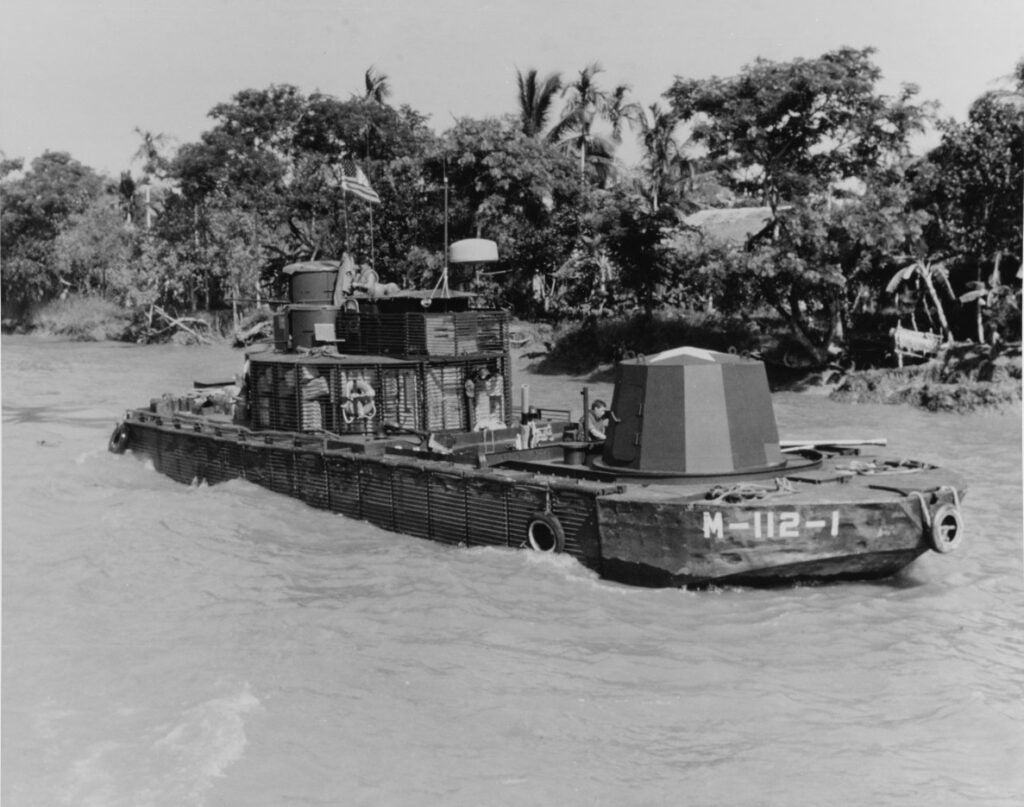 The landing craft made an excellent gun platform in the shallow waters of Vietnam's rivers (U.S. Navy).

As warfare evolves, so too does battlefield technology. Fast piston plans and early helicopters during WWII gave way to supersonic jets and heliborne air assaults in Vietnam. However, some technologies need only a slight upgrade to remain relevant in future conflicts. One example is the Landing Craft Mechanized, a WWII-era vessel designed to deploy vehicles during amphibious operations. During Vietnam, the LCM was refit with armor and heavy weapons, swapping beach landings for riverine assault operations.

Designed by different American and British manufacturers, the LCM had no unified design. However, the basic principle of a large vessel with its ramp at the front for delivering vehicles as heavy as tanks is common across all variants. Such a large landing craft could also carry its own weapons to better defend itself in the shallow waters of Vietnam’s rivers. This concept was applied to the LCM (6), a stretched version of the WWII-era LCM (3). The result was the Armored Troop Carrier.

To match their increased firepower, Tangos were also fitted with extra armor. Steel and bar armor protected the crew from rounds up to .50 caliber and offered some protection against high explosive anti-tank rounds up to 57mm. Hull blisters below the water line not only offered added protection from mines but improved stability and reduced the ship’s draft. However, the increased weight of the ATC reduced its top speed from the LCM (6)’s 9 knots to 8. In practice, the ATC’s effective speed was 4-7 knots. The ATC was complemented by the Assault Support Patrol Boat, also known as the Alpha Boat, which traded troop carrying for speed and additional armor. ASPBs acted as escorts for the slower ATCs.

Another step in the evolution of the LCM (6) was the Monitor variant. Like the Alpha Boat, the Monitor ditched its transport capabilities to focus entirely on fire support. It was also fitted with a rounded bow instead of the drop-down ramp which extended the vessel’s length from 56 feet to 60.5 feet. Monitors featured a 40mm cannon and 81mm mortar in addition to the guns fitted to ATCs. The mortar was mounted amidships while the 40mm cannon was housed in a distinct forward turret reminiscent of the Civil War ironclad USS Monitor, giving the gunboat its nickname.

Monitors were further modified with more specialized weapons. Eight variants were built with 105mm howitzer guns to provide heavier firepower. However, perhaps the more notable variant was the Zippo. As its name implies, the Zippo was a Monitor fitted with a flamethrower. While the Monitor’s 40mm cannon was capable of damaging Viet Cong mud bunkers, its rounds struggled to knock them out entirely. In October 1967, an Army M132A1 armored flamethrower was mated to a Monitor to test the viability of burning out enemy bunkers. Although the M132 test was successful, the additional 23,000 pounds was not practical. Instead, in May 1968, six Monitors were fitted with smaller, lighter M10-8 flamethrowers which still proved to be effective.