The 5 most famous real-life swords from military history 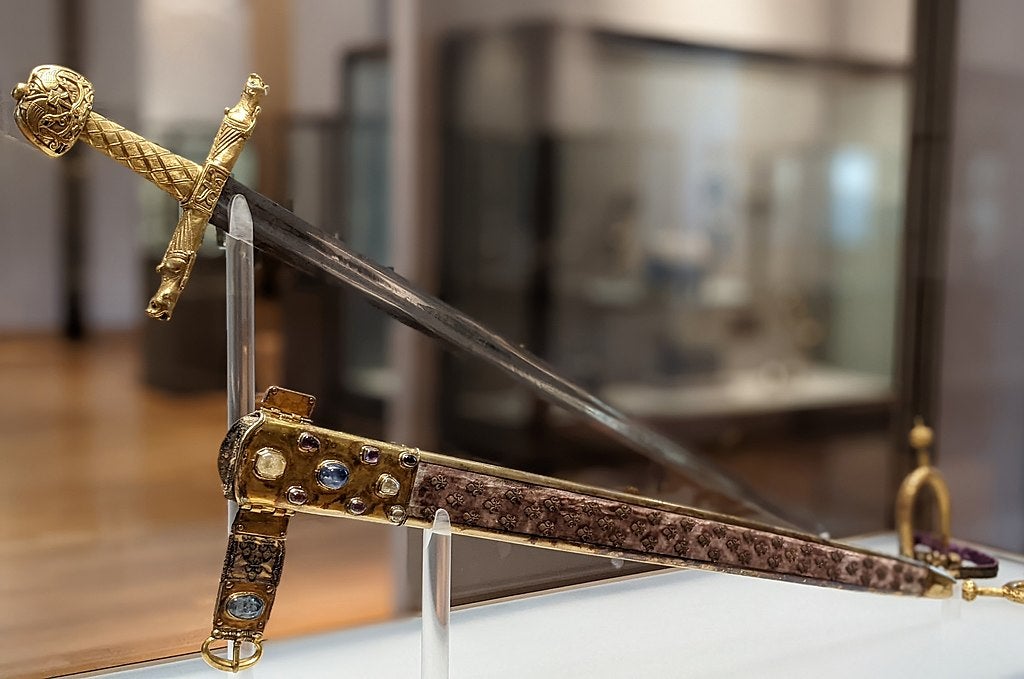 Joyeuse displayed in the Louvre.

These days, swords are merely ceremonial. There’s not a lot of need for getting in close and cutting the enemy down while your side of the battle is being bombarded with artillery and taking small arms fire. Like many holdovers from the days of yore, swords still have the power to inspire as symbols of past military glory. Some of the most famous swords from military history were given personal names, which made them distinctive weapons and a prize to their owner. Those named swords are still identified by those names, transcending centuries of history while losing non of their grandeur.

1. Curtana, the Sword of Mercy

This sword is legendary for a number of reasons. The first is that it’s part of the British Crown Jewels collection and is used by Kings and Queens of England during coronations and knighting ceremonies. The sword’s legend dates back to Tristan, a knight of Athurian legend who supposedly slayed a dragon with it.

The furthest it is traced back is to Edward the Confessor, who ruled England until just before the Norman Conquest in 1066. The sword is missing its tip, which is squared off and is how it earned the name “Sword of Mercy.”

The name is French for “Joyful” and Joyeuse was probably used for anything but joyful reasons, depending on which side of Charlemagne’s army you happened to be on. It was the Frankish king’s personal weapon, and is said to have a piece of the Lance of Longinus, the spear that pierced the body of Jesus Christ while he was on the cross, in its hilt.

Charlemagne used Joyeuse to conquer Vikings, Italians, and Moorish troops on his way to becoming the Holy Roman Emperor. After his death, the sword was used in coronation ceremonies to crown French kings. Today, it is kept in the Louvre.

Most of the movie Braveheart was BS, but there’s nothing about the real William Wallace that was. Wallace was a minor noble before the English made him so mad, he decided to expel them from Scotland altogether. It was said that Wallace stood nearly seven feet tall, which would sound about right because his sword is almost 5.5 feet long.

Although Wallace’s time as Guardian of Scotland was relatively brief, his legend lives on through his sword, which is kept in the Wallace Monument in Stirling, Scotland, near the site of one of his most famous victories against British rule.

Tizona is the name of the sword wielded by the legendary Spanish warrior ​​Rodrigo Diaz de Vivar, also known as El Cid. El Cid was a knight from Castile in Medieval Spain who spent his years kicking around anyone who opposed him.

El Cid was so feared by his enemies that even after his death, a Castilian army tied his corpse to his horse, put Tizona in his hand and let the dead man lead them into battle. When the opposing Moors saw El Cid riding toward them, they broke and ran.

No list of the most famous swords would be complete without mentioning the Sword of Goujian. People say “they just don’t make things like they used to,” and with this weapon, they might be right. First built between 771 and 403 BC, the sword was used by Emperor Goujian, who fought a series of wars trying to unite China.

It didn’t work, at least not in Goujian’s lifetime. The Sword of Goujian was buried in the ground for centuries. When scholars found it, the copper and tin-made showed no signs of wear, despite being fully submerged in water for centuries. There wasn’t even rust on it.