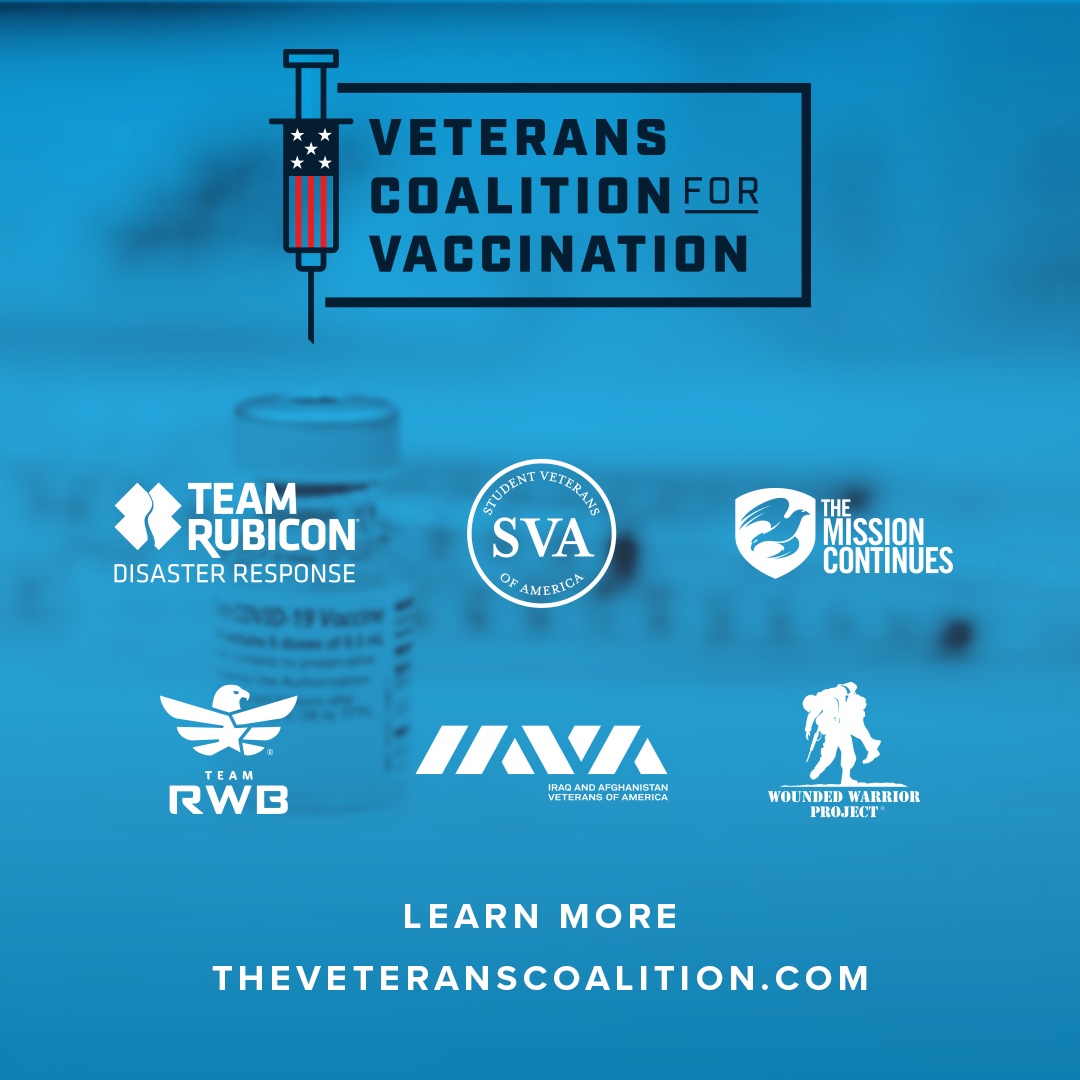 Six of the leading veterans organizations are joining forces, forming a coalition to combat COVID-19. Team Rubicon is at the helm.

The Veterans Coalition for Vaccination (VCV) includes Team Rubicon, Iraq and Afghanistan Veterans of America, Student Veterans of America, Team Red, White & Blue, The Mission Continues and Wounded Warrior Project. All are united in the commitment to aid local and state officials in distributing the COVID-19 vaccine to American citizens across the country.

Navy veteran and Team Rubicon President and Chief Operating Officer Art delaCruz is deeply familiar with tackling disasters and challenges, something many veterans have experience in. It’s for this reason that delaCruz believes veterans are uniquely positioned to make a tangible difference in fighting the invisible enemy that is COVID-19, and winning.

Team Rubicon has been in the fight against Coronavirus since March 2020 and the VCV is what delaCruz feels is the next vital mission. “In 2019 we ran 119 operations and we ran close to 380 last year,” delaCruz shared. In 2020 TR was on the ground distributing personal protective equipment, administering COVID-19 tests, handing hurricane disaster relief and supporting neighbors in need. “Even with 140,000 volunteers we began to stretch our capacity,” he said.

“We were staring at this national problem where we knew that 350 million or so citizens needed to be vaccinated. We knew that the people who were really on the front-line, the true warriors, these nurses and doctors had been at it for 10 months and we thought ‘how can we help?’” delaCruz explained.

In November 2020, hope was on the horizon. Vaccines were receiving their emergency approvals after successful trials, and, “This,” delaCruz said, “was the answer.” One of the Special Forces doctors in a TR strategy meeting said, “Vaccines don’t save lives, vaccinations save lives,” delaCruz shared. It was this striking realization that led TR to forming the VCV.

With over 18 million veterans throughout the country, TR knew they needed support to activate them all. So, they brought the big guns. “We made a decision to see if we could collect everyone together and get them aligned around this mission. Come late December we started this scaffolding and framework. We had our first meeting on December 17… and we launched,” delaCruz said.

On December 15, TR was in the Navajo Nation giving their first vaccination. “They were the most devastated community in the country. Their hospitals only staffed at 5% of normal,” delaCruz shared. Soon, they received a call from Chicago’s Emergency Management team, requesting their help. “By December 28, our volunteers were training with the city personnel and they are now at seven distribution points of Chicago… and that’s just the start.”

By providing resources of a million-strong veteran coalition, the VCV will assist in ensuring access to vaccinations. When President Biden announced his COVID-19 national strategy for response, five of his pillars were identical to what VCV had identified for their mission. Addressing trust, opportunity and equity were among the most important, according to delaCruz.

“A man or woman who’s been off to combat or served, they have legitimacy and a voice. Now we are using that voice to build trust. Military veterans also come from every culture and community across the country so it’s probably the most diverse organization in the US, so who better to bring the message that vaccination is something the nation should do to move forward,” delaCruz said.

It is the hope of TR and the VCV that the country will come together to unite in this fight. DelaCruz explained that it’s not unlike the victory gardens or rationing for the needs of the military during World War II. This is a new, pivotal moment where that same urgency and sacrifice is needed.

The VCV is not only battling the virus, they are attacking false and misleading information. “It’s combat against misinformation … It’s about demonstrating leadership upfront that we believe in science and vaccinations, which are important to get the nation back on its feet ,” delaCruz stated.

To help with tackling misinformation, VCV is being supported by the global advertising technology company Amobee and AdTechCares, which has over 50 partners. These organizations are committed to developing ongoing Public Service Announcement campaigns to ensure credible information is distributed about vaccine efficacy.

“Vaccinations may be an individual act but that individual act has tremendous, tremendous societal value. Just like the collective self-sacrifice in World War II, this act of vaccinations or supporting vaccinations in any way possible, it touches everyone,” delaCruz said. “Americans have traditionally risen to the occasion during the hardest of times … we have an opportunity here to make it happen again.”

Team Rubicon and the VCV is imploring veterans to put on a new uniform and continue to serve this new and vital mission. It may be one of the most important fights to date.

To learn more about how you can support the efforts against COVID-19 and vaccinations, visit www.TheVeteransCoalition.com