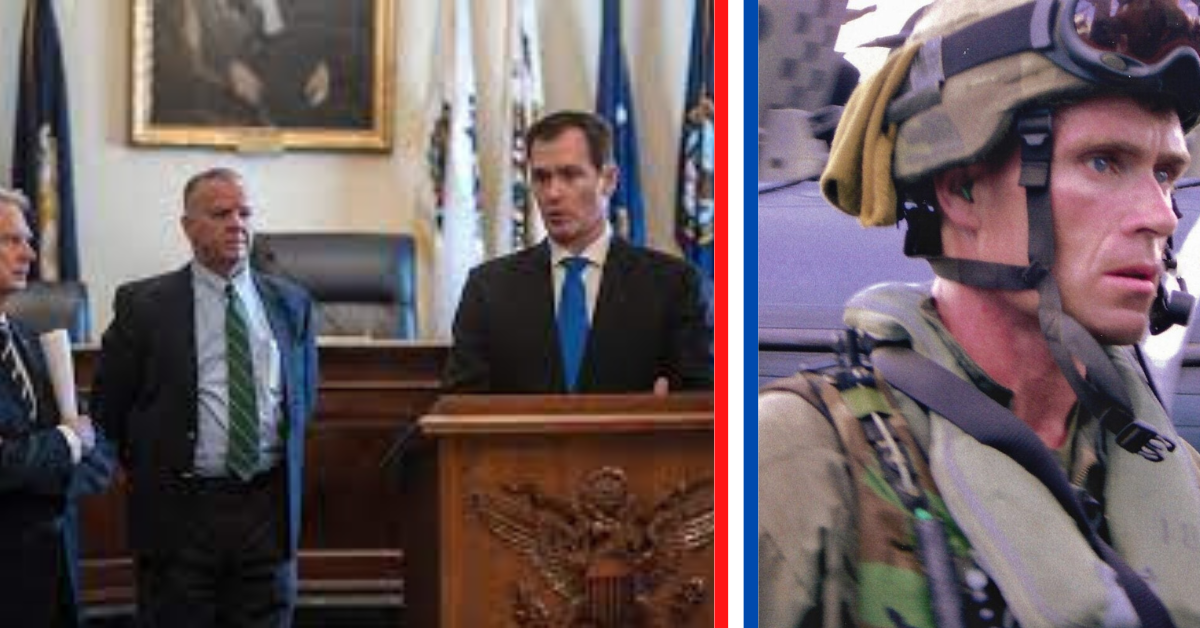 The 2007 Marine Forces Special Operations Command (MARSOC) 7 case made news headlines across the country. Standing in the wings defending the Marines accused of war crimes was the now retired Major Fred Galvin.

But before this Marine Corps Raider put it all on the line, he was a young kid touring the battlefields of the Revolutionary War. It was there the seed of service was planted.

We had these park rangers who just painted this vivid picture of sacrifice and all of these people dying, who were getting amputated. Your medication was drinking some whiskey and then there was a sawed off lambs,” Galvin explained. “I knew at that point I wanted to do something like that as a kid, just because our country was founded by people that died for it. Our Declaration of Independence is figuratively signed in blood.”

After high school, he knew college first wasn’t for him so he enlisted in the Marine Corps after graduation. “Everything involving being outdoors in the field was incredible. The training, weapons, vehicles and going out on ships was all a new experience,” he shared.

Not long after, he transitioned out of the service to go to school. Though he spent a few years on Wall Street after college, Galvin was ready to be back in cammies. This time he went in as an officer. After being chosen for Force Reconnaissance as an infantry officer, he was appointed to command the first MARSOC company sent to Afghanistan.

“We’re doing combat patrols and on our 30th mission when we were ambushed in this village on the border of Afghanistan and Pakistan,” he shared. “We did get blown up by a car bomb and one of our Marines was on fire but he stood up immediately to fight.”

After the Marines fought their way out and made it back to base, the real fight began.

“This was the very early stages of what we call information warfare. They had a two pronged attack where if they launched this ambush against us and they killed a bunch of Americans, big success,” Galvin said. “If the opposite happens and they launch the ambush and Americans kill them, they would have a pre-fabricated story all teed up, ready to go. That story was that Americans killed civilians, women, children, elderly and that they even killed farm animals.”

Less than an hour after they’d made it back to base, BBC aired a story about the Marines from Foxtrot being drunk and using slingshots to fling grenades at Afghan civilians. It led to massive protests in Afghanistan with its president publicly condemning them.

According to records, an Army commander in the area apologized to the locals and stated the Marines actions were a stain on the honor of Americans. Cash payments were then dispersed to the survivors of the alleged shootings and the unit was removed from theater and sent home.

The Marines and Galvin were under investigation and brought before the Court of Inquiry. Though they were ultimately cleared weeks later and the firefight they engaged in was labeled appropriate, there was no formal apology issued. And – the damage was done. The world thought they got away with murder.

He was essentially forced to retire after almost 27 years in the corps but never stopped fighting with the Department of Defense to change the narrative. The Navy conducted an investigation and in 2019 released the results, labeling the work done by prosecution as “sloppy”. Galvin attributed his denied promotions to the unfounded allegations and sued the Navy and DoD in 2021.

On June 7, 2022 Galvin released a book about the experience, A Few Bad Men: The True Story of U.S. Marines Ambushed in Afghanistan and Betrayed in America.

As to what made him want to use his voice to fight this hard, his answer was simple.

“If this case never had occurred, I would not have understood how biased our military judicial system is. Since several high-profile cases occurred after 9/11 including the Corporal Pat Tillman investigation, the war crimes cases of Fallujah, Haditha, Hamdaniya and the MARSOC 7 case which I was a part of, commanders in the first four cases were accused of not taking swift and complete action to enforce military discipline,” Galvin explained. “After those four cases the pendulum swung in the opposite direction due to congressional pressure from the late Congressman Murtha and others. Military Commanders in 2007 read the tea leaves and did the opposite as before, they rushed to judgment, threw due process out the window and became ‘virtuous commanders’ by accusing troops of war crimes prior to the facts being known. Their violation of the presumption of innocence impacted the Marines in my command, which led me to advocating and assisting countless other military members caught in the crossfire of the military legal process.”

Since then, he has continued to use just his voice for universal justice and to encourage leadership to focus on values instead of politics. Though it was a long road getting to where he is today, Galvin wouldn’t change it. His goal in advocacy going forward is simple.

“To drive legal reform changing the Department of Defense’s capital cases to be adjudicated by civilian versus military authorities in the same manner in which Military Sexual Assault cases have changed from being handled by military to civilian judicial authorities. This is due to the repeated examples of Unlawful Command Authority against defendants that have been experienced in the military,” he explained.

These days, he works for Tesla as a training manager and continues to speak for service members he feels have been unjustly targeted for criminal offenses.

Keep Up the Good Fight

“Having faith and a long-term vision is paramount to overcoming perceived perils. Leaders under fire must take the extra time and intense effort to create a vision, develop, then enact a campaign strategy to create necessary change in the profession they are in,” he shared. “Lessons to be learned are to take care of your troops, don’t be unethical, understand in time there will be consequences and they will be more severe than the short-term successes. It’s not worth it to betray your fellow brothers and sisters in arms.”

You can learn more about retired Major Fred Galvin and his book by clicking here.