This Air Force rifle can fit in an ejection seat (and you can buy one too...sort of) - We Are The Mighty 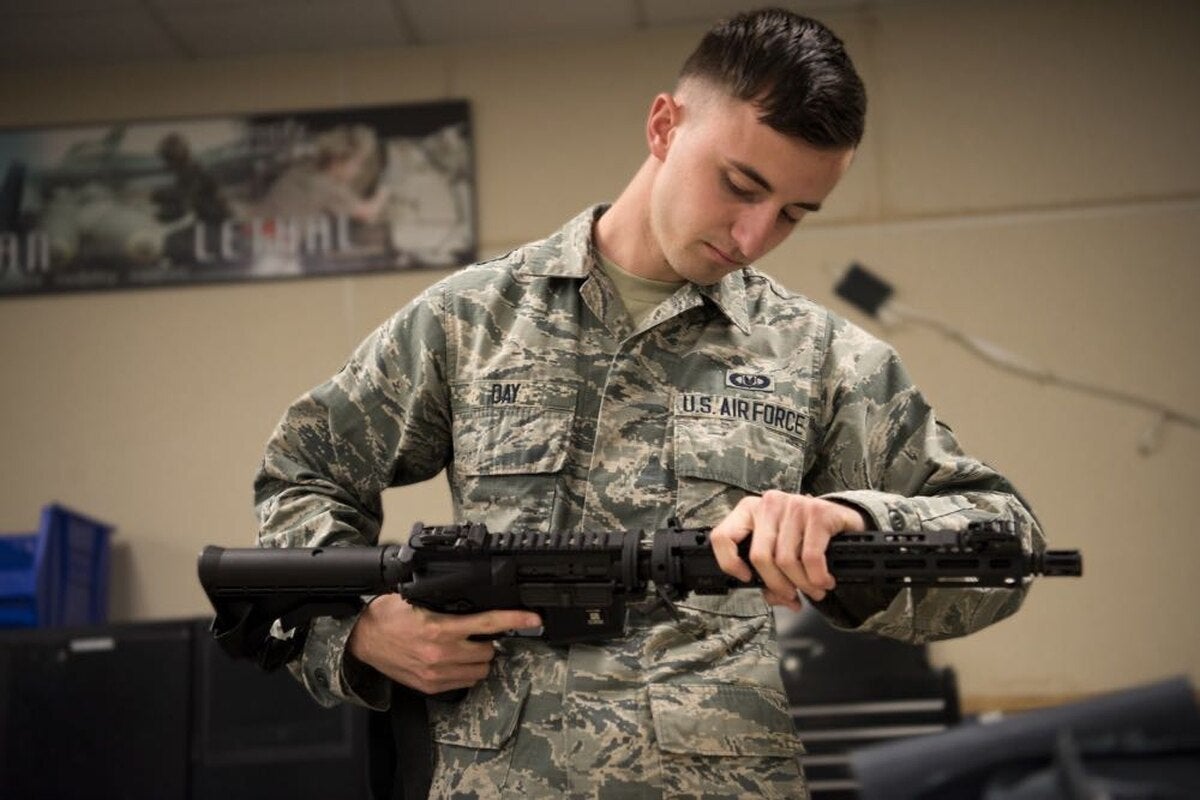 If a pilot gets shot down behind enemy lines, their ultimate goal is to survive and make it back to friendly lines. Downed pilots are still considered combatants and allowed to carry weapons under the Geneva Conventions. However, due to the limitations of carrying gear in an aircraft, pilots were generally only equipped with a pistol and a survival knife. In 1952, the Air Force introduced the M6 Aircrew Survival Weapon. The folding weapon had a .22 Hornet barrel and a .410 bore. However, it was really only suitable for hunting animals for food. Pilots needed something with more punch to defend themselves. That’s where the GAU-5A comes in.

In the 1960s, the Air Force introduced the Model 608 CAR-15 Survival Rifle. Modified from the existing CAR-15, a compact version of the M16 similar to a modern M4, the Model 608 had a 10-inch 5.56x45mm barrel. It had a minimalist stock, a very thin handguard, a chopped pistol grip, and a conical flash hider. The rifle was broken down between its upper and lower receiver for easier storage and was stowed in the pilot’s seat pack with four 20-round magazines. With modern firearm technological evolutions, the Model 608 was improved upon for today’s pilots.

In June 2018, the Air Force announced the new Aircrew Self Defense Weapon. Different from the previous survival weapons, the ASDW is designed to give pilots as much firepower as possible if they have to defend themselves behind enemy lines. Designated the GAU-5A, it is based on the standard-issue M4 carbine. However, the rifle weighs less than 7 pounds and can be stowed in the seat kit of the modern ACES 2 ejection seat.

The GAU-5A utilizes a 12.5-inch barrel instead of the M4’s 14.5-inch barrel. It also uses flip-up front and rear sights to do away with the M4’s bulky triangular front sight and gas assembly. The GAU-5A’s pistol grip also folds back and locks against the collapsible buttstock which is unmodified from the M4. Unlike the Model 608, the GAU-5A features a quick-detach barrel to reduce its footprint in storage. The Cry Havoc Tactical Quick Release Barrel allows the barrel and handguard to attach and detach from the receiver in a matter of seconds. In total, the deployment of the GAU-5A from storage takes just 30 seconds.

With a complement of four 3-round magazines, the GAU-5A puts more firepower in the hands of a downed pilot than ever before. “We were asked to design a stand-off weapon that was capable of hitting a man-size target at 200 meters,” said Air Force Gunsmith Shop chief Richard Shelton. While the GAU-5A itself is only available to the military, there is a civilian version of the rifle.

The Midwest Industries MI-GAU5A-P is a pistol clone of the Air Force’s GAU-5A. It uses the same QRB system from Cry Havoc, a set of flip-up Magpul MBUS Pro iron sights, a FAB Defense folding pistol grip, and an SBA3 pistol brace. Due to the 12.5-inch barrel, the MI-GAU5A-P is built and sold as a braced pistol rather than a rifle with a stock. It is possible to file it as an SBR in order to use the proper Mil-Spec stock. Of course, the biggest difference is that the pistol clone is restricted to semi-auto fire. “THIS IS NOT FULL AUTO, STOP CALLING AND ASKING IF THIS IS FULL AUTO,” Midwest Industries notes on its product page. Whether you’re looking for an easy-to-pack 5.56mm truck or bugout bag gun, or want to get as close as you can to what Air Force pilots carry in their ejection seat, the MI-GAU5A-P comes with a lifetime warranty and is proudly 100% made in the U.S.A.