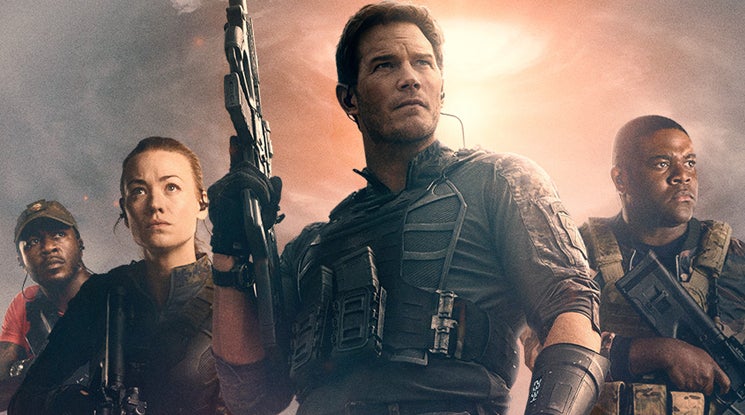 In a post-COVID world of streaming movies and digital premieres, Amazon’s The Tomorrow War starring Chris Pratt is a solid summer blockbuster. The sci-fi action film can be likened to Interstellar crossed with Edge of Tomorrow with a healthy dose of Chris Pratt being Chris Pratt. For a Hollywood production, The Tomorrow War gets a surprising amount of things right when it comes to gear. Of course, there are plenty of movie sins in it as well. This article will be mostly free of spoilers, but we make no guarantees, so read at your own risk if you haven’t seen the movie yet.

Let’s get the “not so awesome” out of the way first. Over the last decade, Bravo Company Manufacturing has become a go-to brand in the firearms industry. Best known for its high quality AR-15 parts and builds, BCM has gained widespread popularity in both military and civilian shooter circles. In The Tomorrow War, the primary weapon of the human resistance is a tricked out short-barreled BCM carbine.

Although it looks futuristic and cool to the average viewer, anyone who has handled the AR-15/M4 platform knows that the weapon is a pretty poor choice. The short barrel significantly reduces the effectiveness of the 5.56x45mm round that it fires, explaining why the humans are losing the war. Despite the linear compensators, all those short barrels firing full-auto in the stairwell would have left everybody with some serious hearing loss too. While the Trijicon ACOG and canted red dot look cool, the short barrel means that the weapon really doesn’t have the range to make use of the magnified optic and no one seems to ever use the canted red dot. Plus, it’s not like the Whitespikes are hard to see so the 4x zoom isn’t necessary for identification at range. Chris Pratt and his crew would have been better served with a larger caliber weapon like SOCOM’s MK 17 SCAR-H or the Sig NGSW.

Maybe Pratt’s character knew about the inadequacies of the standard-issue carbine after all. Before reporting for duty, he retrieves his personal .45 ACP Kimber Warrior SOC from his home safe. Used by elite units like LAPD SWAT and Marine Force Recon, Kimber 1911-style pistols are considered to be some of the best .45 sidearms money can buy. While militaries and law enforcement agencies have largely made the switch to the smaller 9x19mm cartridge in 2021, a full-power .45 is probably a better choice against the aliens seen in The Tomorrow War.

Speaking of big-bore pistols, J.K. Simmons’ character carries one heck of a hand cannon. Playing Pratt’s father in the film, Simmons’ character is a Vietnam veteran with a taste for big guns. His sidearm of choice is an IWI Desert Eagle Mark XIX chambered in .50 AE. That’s the kind of slug you want to be throwing at a gigantic armored alien. A .45 is great, but a .50 is a .50. Naturally, the film features a bit of father-son verbal jabbing regarding the size of the pistol, but it proves its worth in the end.

Matching his Desert Eagle, Simmons’ character carries an equally heavy-hitting rifle. Made to order with a lead time of eight weeks, the FD338 has a base price of $5,450 according to F&D Defense’s website. The .338 Lapua Magnum that it fires hits with about five times the force of 5.56x45mm and has more consistent and predictable ballistic performance than the legendary .50 BMG. This kind of performance in an AR-style rifle is unparalleled in the firearms industry and Simmons’ character puts the FD338 to good use in the film.

One weapon that stands out from the others is the shotgun used by Edwin Hodge’s character. His Beretta 1301 is a 12-gauge gas-operated semi-automatic shotgun that deals serious damage to the armored aliens at close range. While it doesn’t have anywhere near the reach of the FD338, the 1301 excels in close quarters and Hodge’s character uses it to great effect. Hopefully he had it loaded with something crazy like tungsten slugs to make the most of his shotgun’s raw power.