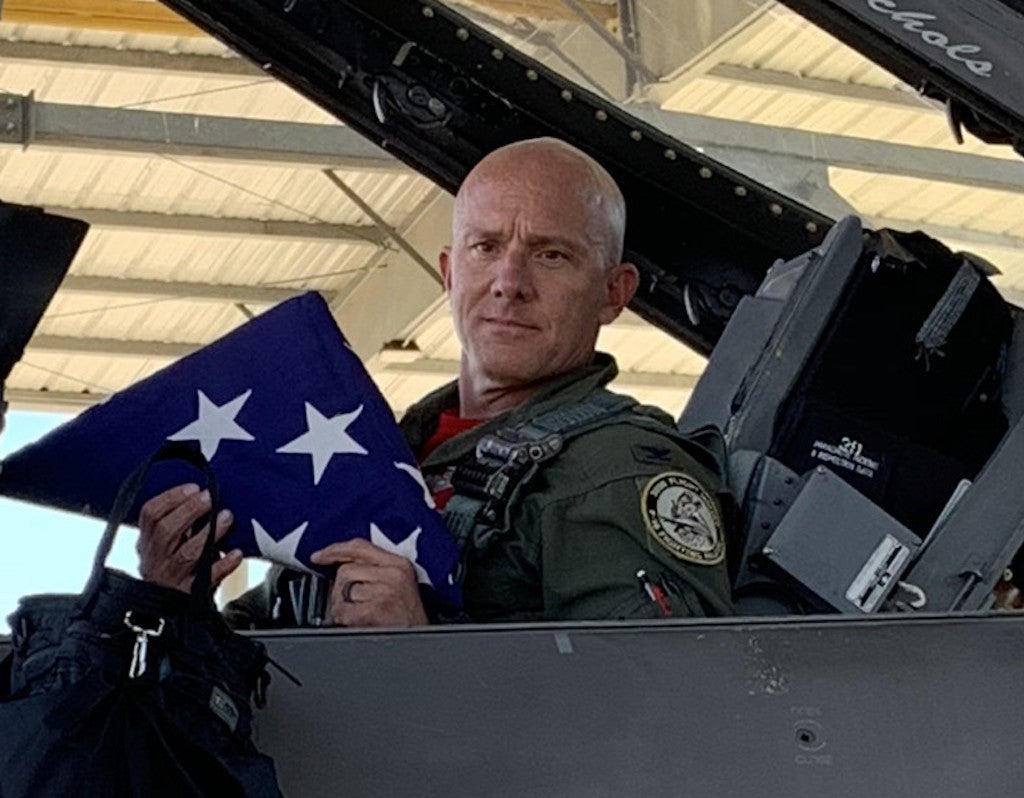 Folds of Honor, a military foundation that provides educational scholarships to the spouses and children of military members who have fallen or been disabled while serving in the United States Armed Forces, earlier this year announced the distribution of nearly 9,000 academic scholarships worth approximately $40 million for 2022-23. Since its inception in 2007, Folds has awarded nearly 44,000 scholarships valued at nearly $200 million. The milestone was reached through a combination of individual donations, corporate partners, numerous golf and other fundraising events and the unwavering support of the 31 local Folds of Honor chapters across the country.

WATM: Can you tell us about the history of Folds of Honor?

I sure can! So, Folds of Honor was established back in 2007 and that was after our now CEO and founder Lt. Colonel Dan Rooney found himself on the United flight landing in Grand Junction, MI, where he witnessed what ultimately is the end state of war, all too often. They carried the remains of Corporal Brock Buckland back on that flight. Dan witnessed the coffin which was obviously flag draped coming down the cargo hold. He saw Brock’s young wife and 4-year-old son and that was the inspiration, the genesis, you know kind of the beginning, for the next 15 or so years that we’ve been in existence. Humble beginnings right?

So, here’s a guy fighter pilot like me, doesn’t really know anybody, doesn’t have any money, but has a passion to make sure that these families are taken care of. Today, $200 billion out the door, 44,000 scholarships is just that an amazing accomplishment in that you know God’s hand put that on his heart to accomplish this mission. Here we are, 2022, and just sent 9,070 spouses and kids to school.

WATM: How has your experience as a veteran helped you in your mission at Folds of Honor?

I think actually my experience as a military kid might have even helped me more. First to your questions, as a veteran, you can relate to the family. I have a wife, three kids, I’ve left to go on seven combat tours and so it’s tough, right? I never take for granted each and every day that you know I’m home and now it’s our mission to make sure that we take care of the families that come to us. It’s really me as a 15-year-old kid, I’m a 3rd generation fighter pilot, I was one of those kids who got the knock on the door when I was 15 years old and the general and the chaplain are standing there telling us – my mom and I – that my father was just killed in a tragic accident. This sends your family on another path. Certainly it’s not the way my mom read the script of our lives but you know we found a way to endure and get on the other side of that. Probably that experience makes me much more relatable to our recipients and gives me an internal passion to make sure that these families know that we’ve got your back and what we do isn’t a handout, it’s a thank you. It’s a hand up because your family, my family, did not raise their right hand and on the dotted line, but they’re along for the ride anyway. I never really asked them ‘why’ it was OK, just always was. So, it’s really neat to take those experiences, and relate them to these families and it gives you more of a personal, enduring passion to make sure that they’re taking care of.

WATM: What was your experience with jumping into into this – where it is so intimate, it’s such a sensitive topic and it’s so raw – two days after retiring. Did you feel that you had enough time to decompress or anything like that?

Yeah, I think it was weird. I think for a lot of us in the military, especially as a fighter pilot and Major on the pointy end of the spear, we’re very type A personalities, right? I don’t do well with not having something to do but I think the weirdest thing was just transitioning away from that brotherhood, right? I mean something that I have known for 30 years and it’s a culture, it’s a mindset. For me as a fighter pilot it wasn’t what I did it’s who I was and it was hard. Walking away from that there’s some of the funny things are you know, waking up for your first day of work and stuff like that, and it’s trying to figure out, ‘Well, how do civilians dress? How do they talk to each other?’ All these other day-to-day life things you didn’t really think about while you’re in the military but I’ll be honest with you it was very therapeutic for me to get right to the fight with the Folds of Honor.

You go from fighting for this country to fighting for these families and for me it was a logical transition that just made sense and allowed me to continue to serve in a very meaningful way. These families, their stories are tough and mean double amputees, you meet very young widows with very young kids and your heart goes out to them. While you can’t change what happened, what you can do is help them ensure the rest of their lives, with their future, and what’s gonna happen to them. I think the greatest thing that we do is, our motto, to honor the sacrifice of their legacy and we keep the memories of their loved ones alive. We talk about them and we celebrate them through the gift of education and so for me it was very powerful transition but in a very, very positive way, absolutely.

WATM: Should veterans know about the February application date?

Yeah, so if you’re a veteran out there and you go to the application form on Foldsofhonor.org click on our application tab on our scholarship and it’ll give all the dates. So, we open up February 1 and it runs through the end of March. So, if you’re a better out there and you have a service connected disability and you have a VA disability rating, you’re eligible to apply and I encourage you to do that. Obviously if you’re a spouse of someone who gave their life for this country, you are clearly qualified for Folds of Honor scholarships and we would encourage you to check us out. Our scholarships our goal is $5,000 per school year and once you’re in our system you stay in our system until you graduate.

WATM: Is Folds of Honor expanding to include first responders such as police fire EMT’s and paramedics?

Yeah, absolutely, so that announcement went out September 12 of this year. We had talked about it, the CEO and the executive team, we’re going over this earlier this year and it just seemed like a logical transition. We’re in a place now where we felt like we could really expand the mission and obviously without deleting anything that we’re doing for our military families but opening it up to these first responders. We made that announcement this strategically on 9/12 because 9/11 is a day of remembrance — not Folds of Honor. On 9/12, every first responder from New York City and around the Pentagon area and everything that happened on that day, they were fully engaged in the fight and there was just kind of this beautiful transition that happened between first responders to the military. We entered the war in Afghanistan shortly after those attacks, so, we are excited to serve the first responder community and we’ve been in engaged with several different organizations. These represent first responders to include their third unions and that local organizations to spread the word but as of February 1 of next year, they will be eligible to apply for Folds of Honor scholarship and we’re excited to serve that community.

WATM: How can the public aid Folds of Honor on its mission?

Your readers out there, if they want to get in the fight with us, they can go to FoldsofHonor.org and click on the squadron tab and for $13.00 a month they could be in the fight with us. $13.00 a month is going to be less than your Netflix subscription and you can help change the life of a military family or a first responder family. We send you updates of what’s going on, we’ll get you in uniform with the Squadron T-shirt , so, click on that Squadron tab.