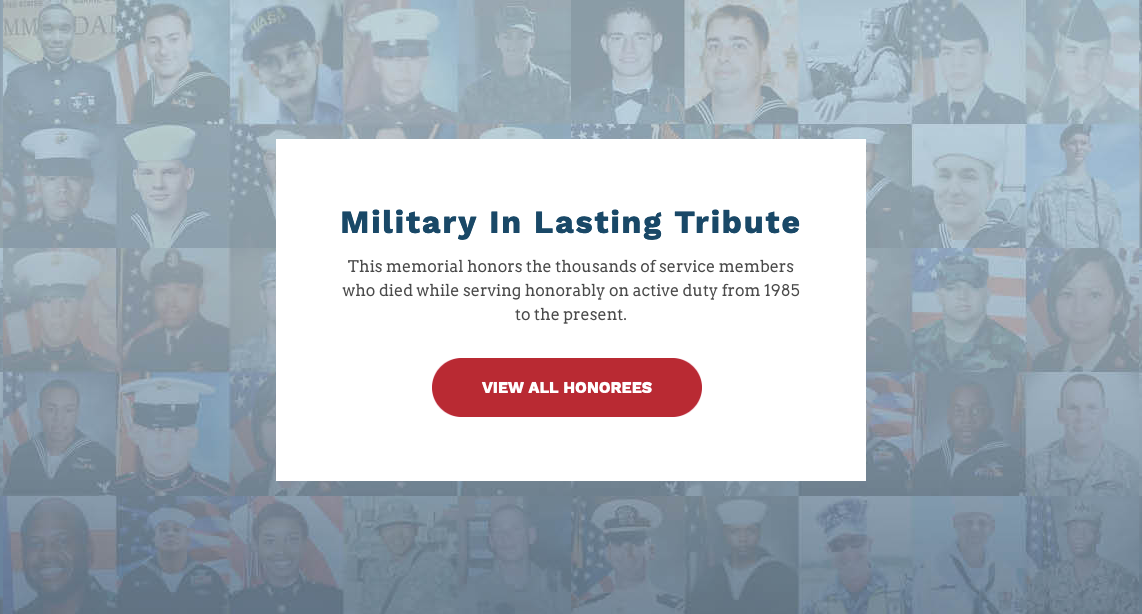 Released on Veterans Day 2021, The Military In Lasting Tribute Memorial is an online tribute to all soldiers, sailors, airmen, Marines and Coast Guardsmen lost in service to the United States.

The Department of Defense created the online memorial so that family members and visitors would have a lasting place to memorialize their fallen loved ones and post tributes, photos and other memories in perpetuity.

Deceased service members will not be able to have their name and likeness entered into the memorial without the permission or request of a surviving family member, but to be able to enter the name of a fallen veteran, entrants must have access to DD Form 1300, “Report of Casualty.”

The memorial site will dedicate a page to each fallen service member, listing their name, branch of service, rank and date they died. For family members, the site will offer the ability to upload a photo of the service members. Visitors will be able to direct link back to the page via social media and other channels.

The reason for the time limit is because those members who died prior to 1985 will require records verification at the National Personnel Records Center, which is currently experiencing pandemic-related restrictions, operating at a reduced capacity, roughly 10% of its normal workforce .

Veterans and veteran families who want to honor a fallen loved one who is buried in one of the Department of Veterans Affairs’ national, state, territorial and tribal veterans cemeteries can log on to the Veterans Legacy Memorial website, which recently expanded its size from four million to 4.5 million individual tribute pages in 2021.

The VLM webpage allows visitors to see where the veteran is buried, and often includes maps of the cemetery, and sometimes a photo of the veteran’s headstone. Friends and family members are able to upload photos, historical documents and offer their respects to the veteran.

Unlike the DoD’s Military in Lasting Tribute Memorial, where internees are restricted to those who died on active duty, the only requirement to being “interred” at the VA’s Veterans Legacy Memorial is to be buried in one of the the VA’s 155 national cemeteries or one of its 93 state, territorial and tribal veterans cemeteries.

The Defense Department website’s memorial is also the only DoD memorial that includes those service members who died during peacetime. The website says if in doubt about the circumstances regarding the death of a loved service member, it encourages all to submit entries for consideration. The department will conduct a higher-level review.

There are a few other considerations for inclusion on the new memorial page. Active duty members convicted of capital crimes, or killed in the conduct of a crime will not be considered. Those service members who avoided prosecution for a crime are also excluded. Finally, a death whose “circumstances that would bring discredit upon the person’s military service” are also excluded.

For any other questions, visit the Military In Lasting Tribute Memorial.