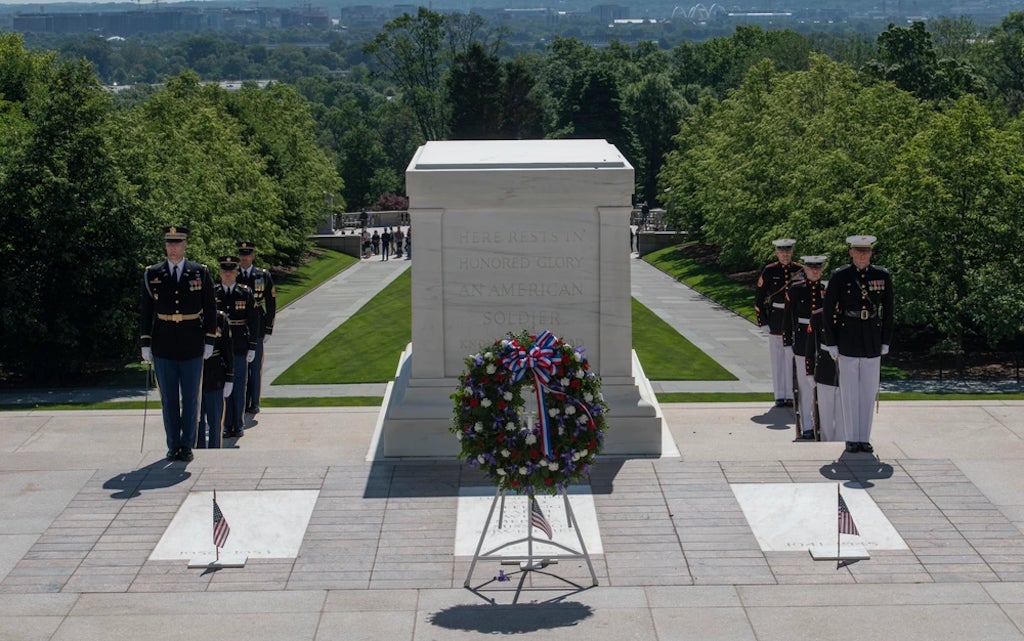 As we roll forward into the end of the month of May, many Americans are planning barbecues, pool parties, and long weekend adventures. But many of us know Memorial Day means so much more.

Memorial Day is meant to honor the fallen heroes of our nation and their families that live with that sacrifice every day. The question is, how? How do we honor such a thing in a way that is respectful, kind, and encourages those around us to honor as well?

This is the question I posed to Ben King, founder of Armor Down and co-founder of Mindful Memorial Day. His answer, while intricate, was surprisingly straightforward.

When in battle, troops are trained to “armor up”. They put on their helmets, bulletproof vests, and other protective gear and hop into tactical vehicles that are “up-armored.” They might serve in armored tanks or on an armored sea vessel. They are taught to “armor up” their minds in an effort to be “battle ready.” Armoring up one’s mind is, in essence, the concept of turning off emotions to be able to think and perform more clearly in the line of fire.

King worked relentlessly prior to his first deployment to “armor up.” He did CrossFit before it was a thing and practiced martial arts. He read books about Vietnam and studied The Art of War by Sun Tzu. The goal was to “embody the warrior spirit.” King says he felt “mentally, physically and spiritually ready to deploy” when he was called up for service. However, once on the other side of that journey, things changed.

As he recounts his time in Iraq, King says, “99% of the time, my mission was good.” By “good,” he means “went according to plan.” Then there was the 1%. King explains that 1% of the time was when he found his unit facing the unexpected. For example, one morning, at 4:00 am, on the way to a briefing, there was a loud noise. Someone, incorrectly, informed the patrol that it was outgoing fire. It wasn’t. It was an incoming Katyusha rocket. The explosion, luckily, went the opposite direction of where the patrol was, and no one was injured. King jokes and says, “What did we do next? We went on a mission.” He says this to point out that, in the world away from war, after a harrowing experience like that, everyone would have gone home to process, rest, and reset. However, in battle, the “armored-up” warrior carries on. Living with a constant knowledge of the potential for snipers, mortars, explosions and other types of attacks is “a unique environment for the mind,” he muses.

One New Year’s Eve, King was the main casualty of an IED explosion. He describes this as his “moment” during his war. Riding in a Humvee full of soldiers headed out on a mission, they encountered an explosively formed penetrator/projectile (EFP). Once again, everyone made it out of the situation alive but this was a turning point for King. He describes the moment saying that they were just driving along and “suddenly there was chaos and noise and bright and it was filled with quick decisions.” At this point in the conversation, King thanks me for allowing him the opportunity to, once again, tell his story. It is moments like this, he explains, that have made the memory “less sharp” and easier to recount. It’s no longer a painful memory, rather “an incredible moment that happened in [his] life.”

King returned home and once recovered, found himself feeling invincible. However, about six months in, he started to notice the foundation slipping away from his seemingly unshakable mind. He would eventually come to terms with the fact that, once having an “up-armored” mind becomes common practice, turning it off is… complicated. King knew this. He had lived it. He still does years later. Putting “armor” on one’s mind and emotions is unnatural. It encourages one to disconnect from the very thing that makes them human.

Frequently battling feelings of anger and despair as well as suicidal ideations, King turned to self-medicating and other maladaptive behaviors. He tried returning to the tools he had implemented to “prepare for war” only to find them lacking. He realized that, because he was different, those tools affected him differently. Shaken to his core by day-to-day internal struggle, King was confused what to do.

After fighting this new battle for more than two years, King decided to try yoga. He found it to be “a counter-experience” to what he had previously done. No longer needing to push through the pain and shut off his feelings to succeed as was often necessary in Iraq or even Cross Fit, he was able to slow down and reconnect with his body. Regarding the first yoga session, King modestly states, “that night, I slept.”

While the relationship between King and his body were improving, his mental health was still in crisis and he continued his search for tools to help navigate the challenges he was experiencing. After a brief conversation in passing at a grocery store, King learned of a mindfulness program for veterans being hosted at the D.C. Veterans’ Affairs Hospital (VA). He explains the surprising ease of registering for and attending the course. He was in a classroom less than a week later learning how to recognize thoughts and separate them from himself.

As King describes, “my thoughts are mine, but they are not me.” Which essentially means the things we think do not have to define who we are.

Recognizing a potential real-life, across-the-board mental health crisis for service members, King set out to create a movement that would inspire veterans and current service members to “Armor Down.” In 2012, King and a handful of others took to the streets of downtown D.C. and handed out flyers with QR codes on them that linked back to guided mindfulness sessions. In his naturally joking manner, King reminds me at this point, “QR codes weren’t even cool then.” Most of the recipients of those flyers were members of Rolling Thunder which is, according to their website, “a United States advocacy group that seeks to bring full accountability for prisoners of war and missing in action service members of all U.S. wars.” However, if you ask an average citizen what Rolling Thunder is, they will probably tell you “A motorcycle club.” It’s both and full of veterans King and his comrades were able to introduce to mindfulness.

Somewhere during the next year, Mindful Memorial Day was created as an offshoot of Armor Down. The purpose was to create a space in which warriors felt they were allowed to be vulnerable. King explains, “Honoring a fallen warrior, in the warrior culture, is often seen as the only time it’s okay to “armor down” … it’s okay to cry… it’s okay to show your vulnerability and just be the person inside of you that wants to do the right thing, feel connection, feel love.”

In 2013, Mindful Memorial Day (MMD) was held at Arlington National Cemetery for the first time. It was a one-day event and there were 6,904 names honored. The names honored during MMD events are all names of heroes that have fallen since 9/11/2001.

In 2014, MMD became a two-day event and then in 2015 spanned Sat., Sun. and Mon. Every year since, MMD has been held inside the Women’s Memorial at Arlington National and includes various complementary events depending on the year. For example, in 2019, there was a veteran-based ballet troupe that performed during the event.

At MMD, individuals are invited to take a ribbon with a name of a fallen hero and honor them with a moment of mindfulness. In 2019, for the first time, those individuals honoring names, known as the Honor Brigade, were invited into section 60 at Arlington. According to National Geographic, Section 60 “is the final resting place of the men and women who made the ultimate sacrifice in America’s most recent wars, especially Iraq and Afghanistan.” The Honor Brigade goes to the gravesides of the honorees and mindfully remembers their service and honors their sacrifice. Sometimes, this is alongside surviving family members and friends. Sometimes the Honor Brigade member is the only person able to be at the graveside on Memorial Day due to reasons beyond the control of the family and friends of the fallen.

According to the website, the purpose of MMD is “the twin goals of honoring the sacrifices of our fallen and promoting the increased use of mindfulness based practices to help those still suffering from the traumas of war.” MMD is open to all, regardless of military affiliation. Because of this, it offers an opportunity for civilians looking for a way to help honor the fallen, as well as military-affiliated individuals a way to honor or grieve, to do so in a heart-centered manner.

In 2020 and 2021, MMD looked very different, but it didn’t disappear. King says he was reminded of the mission to continue honoring the sacrifice of the fallen and their families and made the event virtual.

As Memorial Day 2022 approaches, King excitedly announced MMD will be back in person at the Women’s Memorial in Arlington National Cemetery as well as online for those unable to attend in person.

When I asked him why he didn’t join some movement that was already happening or create some other “thing,” he simply replied, “probably ego.” Knowing King as I have for years, I can’t help but respect the honesty behind that remark and recognize the aligning of integrity between his personal life and the movement he helped bring to life.

For more details about Mindful Memorial Foundation, the non-profit hosting MMD, please visit https://www.mindfulmemorialfoundation.org/. Details on where to attend an event, how to volunteer or to register as a virtual MMD participant can be found on the site as well.