Audie Murphy: To hell and back, over and over again - We Are The Mighty

Audie Murphy: To hell and back, over and over again 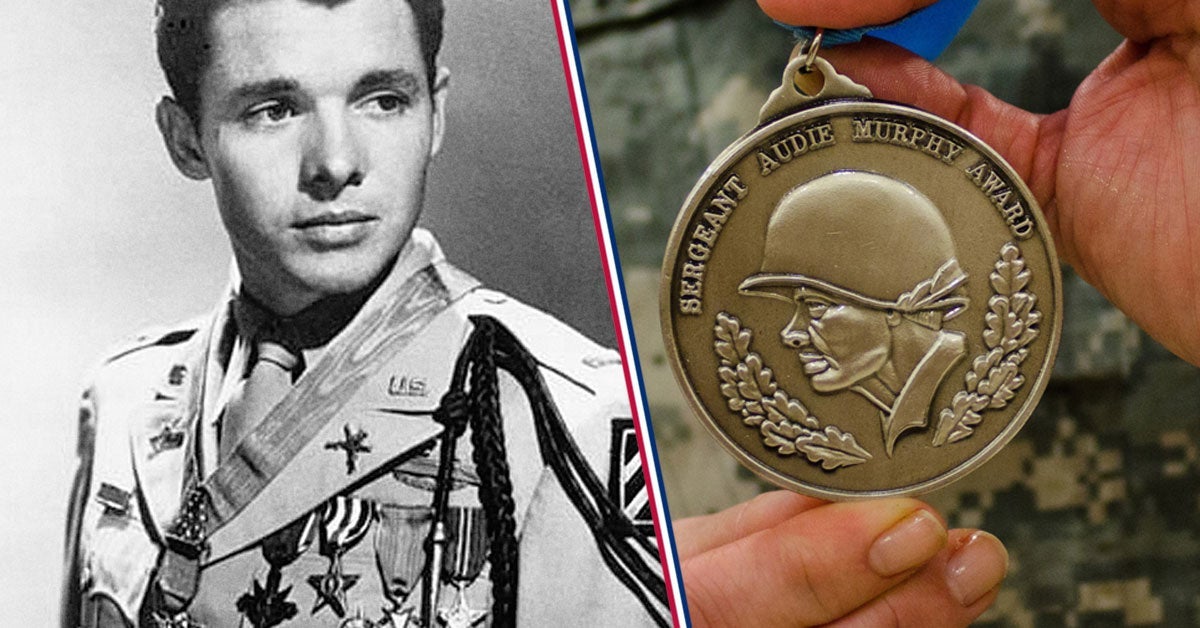 The story of heavily-decorated GI Audie Murphy has been told well. The diminutive sharecropper from Texas fudged his age and finally was able to join the army when he was barely 16.

One of 12 kids, Murphy’s family was abandoned by his father, and his mother passed away not long after. Audie Leon Murphy supported his family by hunting and odd jobs.

At 17, he found himself in the exotic locale of Casablanca. For the next year, between bouts of malaria.

Part of Murphy’s fame comes from the staggering list of awards he won, including, of course, the Medal of Honor. He received the French Croix de Guerre three times! Murphy displayed unflinching courage numerous times, seeming to ignore his own mortality.

All this has been chronicled, nowhere more than the 1955 Hollywood film, “To Hell and Back.” Here, Audie Murphy stars as himself; by this time he was also well on his way to carving-out a sparkling movie career. The almost unbearable stresses of combat, along with a sharp temper as a teen, never really left Audie Murphy. Still and all, he managed to succeed in several careers, even becoming a more-than-passable songwriter.

It is his 1949 memoir, To Hell and Back, that distinguished Murphy barely into his 20s. An articulate guy himself, Murphy was aided in this publishing effort by a buddy, David “Spec” McClure, who would become a mentor of sorts in Hollywood.

Though he found fame, Murphy always remembered the people that really mattered. His book is dedicated to “Private Joe Sieja, killed in action on the Anzio Beachhead, January, 1944, and Private Lattie Tipton, killed in action near Ramatuelle, France, August, 1944.”

He added the line: “If there be any glory in war, let it rest on men like these.”

Murphy’s book opens with a lasting image, a mixture of his own memories and McClure’s flair:

“On a hill just inland from the invasion beaches of Sicily, a soldier sits on a rock. His helmet is off; and the hot sunshine glints through his coppery hair. With the sleeve of his shirt he wipes the sweat from his face; then with chin in palm he leans forward in thought.”

There is a bit more recounting of the moments after battle, then Murphy himself emerges in focus, and in color:

“Just trust the army to get things fouled up. If the landing schedule had not hone snafu, we would have come ashore with the assault waves. That was what I wanted. I had primed myself for the big moment. Then the timing got snarled in the predawn confusion; and we came in late, chugging ashore like a bunch of ducks in a ferryboat.”

Later, he recounts meeting an Italian family, including the beautiful daughter. The father tells Murphy that the Germans are “arrogant and vicious.” They share a sparse meal and he is on his way.

And it is on that way that Murphy ends his riveting memoir with the action at the Colmar Canal, a narrow band of water near the Rhine River. Germany lay before them.

He writes that an anti-aircraft unit has turned its guns on them, the enemy ground units. It is January, 1945. In a few months the war will conclude but until then—more fighting, more death. Murphy remembers that for three hours, the anti-aircraft until fires 22,000 rounds of ammo at his unit.

On the way to the end of this tale, the end of his war, Murphy recounts one last remarkable action. Just down the road from a bridge they are supposed to take, his unit corrals a group of German prisoners, so exhausted they can barely raise their arms. They had thrown down their helmets. Murphy and his men train their guns on these physical and emotional wrecks, but then they hear the thundering of Nazi tanks approaching! Recognizing that they are unrecognizable from their captured foes due to mud, the Americans instinctively pick up and put on the Kraut helmets and wave the tanks on. The metal behemoths roll on into the countryside and Murphy remembers this cold sweat pouring down his back.

On the last page of his memoir, Murphy finishes the thing:

“My country. America! That is it. We have been so intent on death that we have forgotten life. And now suddenly life faces us. I swear to myself that I will measure up to it. I may be branded by war, but I will not be defeated by it.”

One can rightly say that Audie Murphy was born in violence, of poverty and abandonment. He survived Hitler’s violence. Then in 1971, at the peak of his professional success, Audie Leon Murphy is killed in an airplane crash.

But even in death, he wasn’t defeated by violence. He overcame it to live an astonishing life.