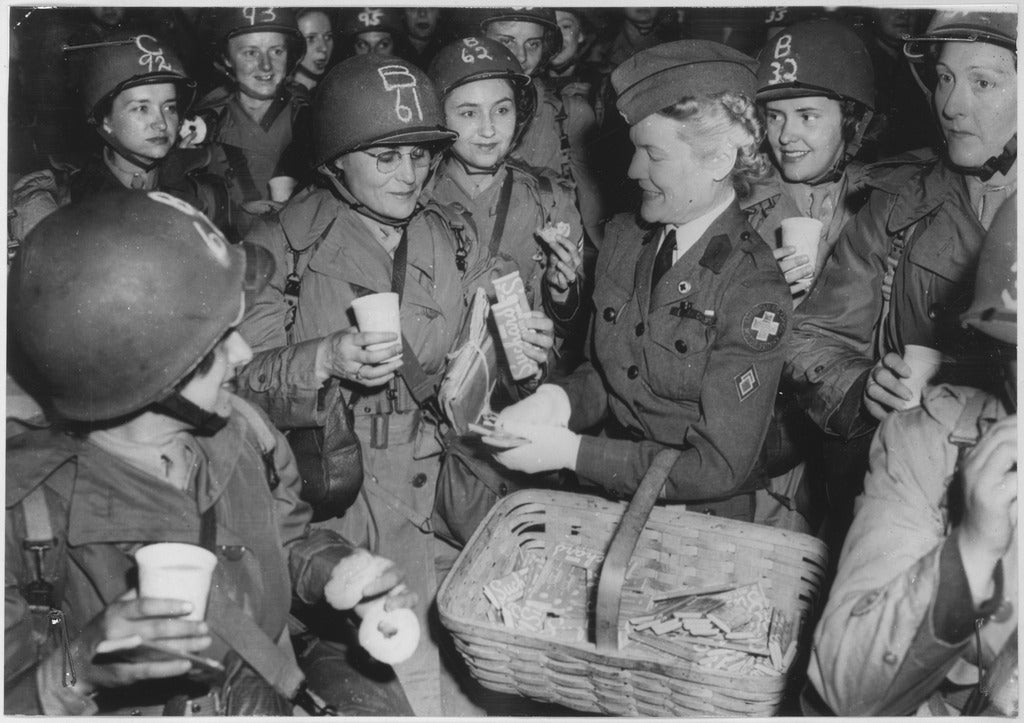 American women replace fighting men in Europe. Members of the United States Army Corps (WAC's) receive candy bars from an American Red Cross canteen worker while they wait to board a ship for Europe in May, 1945.

During WWII, the United States encouraged and empowered women to man the factories and even join the fight in non-combat roles. The American vision was that we were all in this together and it would take everyone to achieve victory.

However, for some reason, the enemies of freedom have never figured out that bigotry and prejudice is one of the biggest behind-the-scenes reasons for their defeat. The Nazis are famous around the world for their cruelty and propaganda. However, propaganda is a double-edged sword. The third Reich believed that the place of women was to maintain the home and breed. They developed a eugenics program and even awarded medals to women who dedicated their lives to becoming baby factories.

The Second World War profoundly altered American women’s lives and perspectives. The military actively sought out women, urging them to pursue demanding and serious tasks outside the home, as the country was short on labor. Many women started working in previously male-dominated fields, but as these women learned, the men in authority saw this transformation initially as transient.

Before the war, men worked in factories, and women stayed home to care for kids and clean. However, the government turned to women because there weren’t enough employees to produce military equipment like aircraft, battleships and guns while men were smashing Nazi skulls. Due to the perception of women as housewives, most male company owners initially opposed hiring women.

Without the empowered women’s labor force, the Allies would have lost the war, prompting the government to start a strong campaign to alter public perception. Posters and billboards were used to convey these, and by 1945, more than 6 million women had secured war jobs. The train of thought was that women are just as capable as men to do these jobs which meant more men could be sent to the front. It is a very progressive view most other nations did not have before the Second World War.

Americans did not find the recruitment drive for nurses to join the military strange. Women were thought to be qualified for positions in nursing. What was unexpected was the 74,000 American nurses who volunteered for active duty during World War II. These nurses were prepped for active service at the Devens Massachusetts Training Center, where they got office assessments and underwent a final four-week program that vaguely matched the basic training for soldiers. They were physically and mentally prepared for deployment wherever American troops went.

American military forces started hiring women for noncombat positions to replace males who had to go to war overseas. Empowered women answered this call quickly and enthusiastically. During the war, about 300,000 American women actively participated in the military. These women in the military were not nurses, as people knew before. It was the catalyst for their empowerment and something entirely new in American society. The newly established Women’s Army Auxiliary command got to work immediately, leading an army of 250,000 women who toiled behind the scenes to free up additional men for combat operations.

Some found this unsettling and expressed their concerns about women’s safety on paper and in public. The newsreels, on the contrary, depicted her as a beautiful oddity of the war and portrayed a positive picture of life for women in the Army. In actuality, arrogance, bias, and hostility were obstacles that military women frequently had to face, but they persevered. They gained new abilities, but more significantly, they got a long-term position in the American Armed Forces. Seventeen thousand women were sent abroad by the Army, although the bulk remained within U.S. borders to work for the Coast Guard.

Some women worked in the aircraft industry riveting warplanes, while others built armaments and submarines. Thirteen million women eventually obtained roles that were once seen as belonging to men. They took critical positions handling telegraphs, translating and flying new warplanes to Army facilities despite not having any combat training.

When the men returned from war, many expected women to “get back in the kitchen.” However, women saw themselves capable of living independent lives and the world had more options for them other than a domestic life. This empowerment has grown in strength throughout the decades into modern times and is one of the unique characteristics that sets apart American women from those in foreign countries. There is still a long road ahead to equality but American women are willing to fight for it thanks to the lessons learned from WWII.