This was one of the most terrifying banzai charges of WWII

This was one of the most terrifying banzai charges of WWII 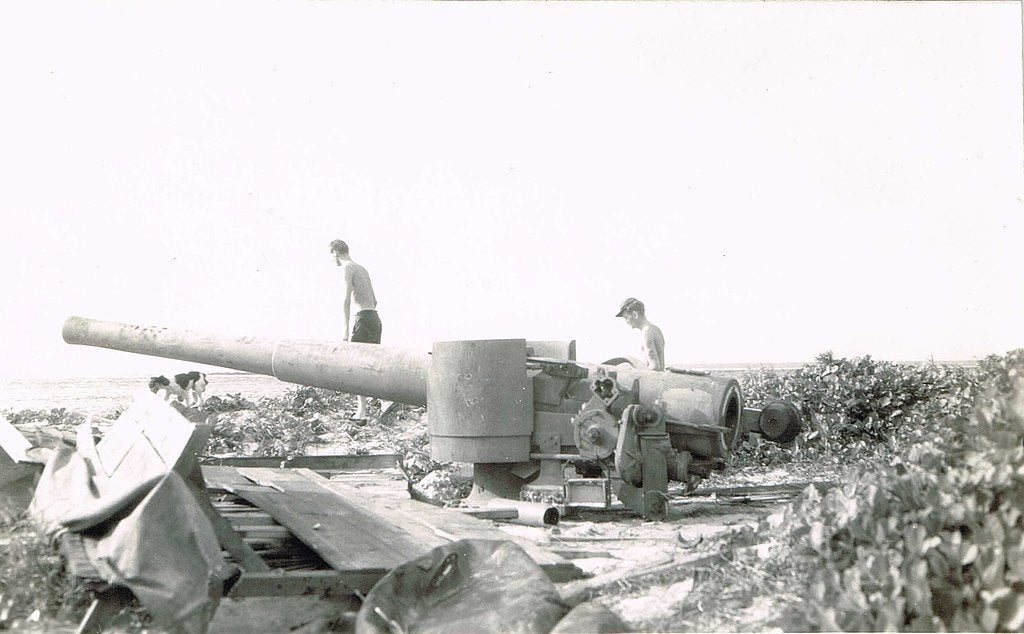 Japanese cannon at Saipan, after the battle.

American attackers across the Pacific faced a hellish task. Marines, soldiers and sailors made landfall again and again. On each island, they faced stubborn, well-trained defenders with knowledge of the terrain. But as the combatants got closer and closer to the home islands, they faced increasingly fanatical defenders and horrific events. One of the worst was in the June-July 1944 Battle of Saipan. Over 4,000 final defenders launched a suicidal banzai charge against three American divisions, swarming over 1,000 yards in 12 hours and causing over 1,000 American casualties.

The battle until that point

Even before the banzai charge, the fighting on Saipan was terrible. Marine divisions conducted the initial landings on June 16, 1944. Caves, ravines, and other restrictive terrain made up the bulk of the island, with thick cane fields covering the flat land on a major peninsula. It was a defender’s paradise. The Marines and, later, soldiers paid dearly in blood for every terrain feature they captured. Japanese troops conducted ambush after ambush at chokepoints across the island.

The Marines increasingly turned to their flamethrowers to clear caves, bunkers, and other tight spaces while reducing their own casualties. Still, the Marine progress was slow, and Army progress was so hampered on June 23-24 that the division commander was relieved. Even where soldiers and Marines made forward progress, logistical support was so bad that some Marines staved off dehydration and heat stroke with cane juice and tainted water.

It was almost worse

For all struggles they overcame, the Americans were aware that the island was almost much worse. Troops encountered half-finished defensive positions and massive defensive guns still wrapped for transport, just awaiting concrete and steel mounts. As Marine Corps Capt. John C. Chapin wrote in a history of the battle:

This unfinished state of the Japanese defenses was, in fact, a critical factor in the final American victory on Saipan. The blockading success of far-ranging submarines of the U.S. Navy had drastically reduced the supplies of cement and other construction materials destined for elaborate Saipan defenses, as well as the number of troop ships carrying Japanese reinforcements to the island. Then the quick success of the Marshalls campaign had sped up the Marianas thrust by three months. This was decisive, for ‘one prisoner of war later said that, had the American assault come three months later, the island would have been impregnable.’

Breaching the Marianas: The Battle for Saipan via NPS.gov

Worse, Japanese troops mixed themselves in with civilians sheltering in the caves. They deliberately attempted to maximize American casualties by exploiting orders to protect civilian lives.

The troops on Saipan were well-versed in banzai charge defense by July 6. Anytime they cornered a large force, they would hear the preparations for banzai. So the Marines and soldiers prepared their defense, massing ammo in each foxhole, fixing bayonets, and ensuring that knives were sharp and near-to-hand. Then, when they heard silence, they would brace themselves until the screaming charge started.

During the night of July 6, Japanese forces were cornered on a northern corner of the island, and the enemy began aggressively probing American positions. Japanese officers found a seam between the American 1st and 2nd battalions of the 105th Infantry Regiment.

Over 12 hours, more than 4,000 Japanese soldiers charged onto the American defenders. In the initial attack, so many attackers poured into the seam that an American major compared it to an endless cattle stampede. An American lieutenant colonel, posthumously awarded the Medal of Honor, was credited with killing more than 30 Japanese with two pistols and then a .50-cal. machine gun. A wounded private propped up against a tree with a pistol and eight rounds and stopped eight attackers. A dentist defended the aid station and its patients with a machine gun and stopped nearly 100 attackers.

But still they came.

A Marine artillery regiment dropped their guns into direct-fire mode. They fired howitzers like field guns but eventually had to destroy their own artillery and fall back.

But the worst horrors came to the civilian population.

The grisly fate of island inhabitants

Japanese civilians on the island, mostly farmers and fishermen, received orders to commit suicide or join in the charge rather than surrender. Survivor accounts detail attempts to surrender or escape, anyway, but few succeeded. A Japanese civilian attempting to surrender had to cross through the fighting while Japanese snipers aimed for them and American attackers, frequently assaulted by Japanese soldiers posing as civilians, decided whether to let them close.

Japanese troops, enforcing the emperor’s order that no one surrender, forced many families to commit suicide, and anti-American propaganda convinced many that a quick death was their best option.

American troops later told stories of entire families throwing themselves off the ridge near the northern edge of the island. Troops found over 1,000 civilian bodies from the final few days, most killed by their own defenders or through suicide.