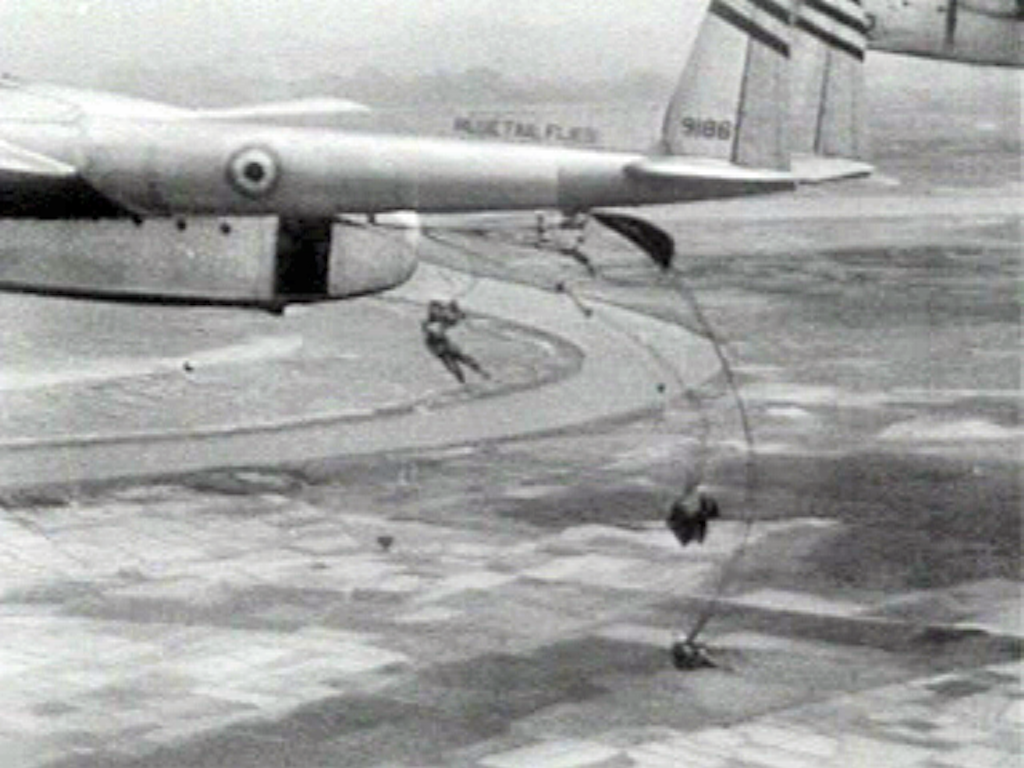 French Union paratroops dropping from a "Flying Boxcar" during the Battle of Dien Bien Phu.

Invading Vietnam didn’t go well for anyone: the Japanese, French, Americans, Chinese all saw their armies pull out of Vietnam before achieving their stated aims. Sure France held it as a colony for a long time, but after World War II, Vietnam was ready to be an independent nation.

France was not prepared for just how far the Vietnamese were willing to go to secure that independence. The postwar climax of the French occupation came in 1954 when French colonial forces tried to force a final showdown that would cripple the Viet Minh rebellion.

The battle – and the war – did not go France’s way, but its American allies offered one possible solution to the French problem in Indochina: nuclear weapons. Fortunately, the U.S. would never get the chance to make good on the offer.

French military leaders made a critical error at Dien Bien Phu. They put the fortification at the bottom of a valley, intending to resupply the base by air, essentially conceding the high ground to the enemy. This allowed the Vietnamese rebels to pound Dien Bien Phu with well placed artillery and constricted French resupply planes using anti-aircraft guns.

When the battle was over, it was a decisive victory, but not for the French as intended, but for the Vietnamese. More than 11,000 French soldiers were taken prisoner. The communist victory was an unmitigated disaster for France, but also for the United States, who was secretly footing most of the bill and providing military assistance.

Most of the American support came through the CIA but the United States government considered getting involved in the two-month battle as it unfolded. As soon as the French realized just how critical the situation at Dien Bien Phu had become, they looked to the U.S. for more help.

The Eisenhower administration was divided on how to respond. Vice President Richard Nixon, Adm. Arthur Radford, and Secretary of State John Foster Dulles. But Congress and President Eisenhower would have final say, and they would not allow American intervention without British help.

Meeting in Paris with French Foreign Minister Georges Bidault in 1954, Dulles made France an interesting offer to help in Indochina: two tactical nuclear weapons. Adm. Radford has made the suggestion of how two nuclear weapons could completely alter the situation at Dien Bien Phu, and the overall situation in French Indochina.

Dulles was never authorized to make the offer, and so there’s little-to-no evidence he ever did. The bulk of the support for the story comes from French author, historian and World War II veteran Jules Roy. A former French official clarified the event twenty years later.

“He didn’t really offer. He made a suggestion and asked a question. He uttered the two fatal words ‘nuclear bomb’,” Maurice Schumann, a former foreign minister, said before his death in 1998. “Bidault immediately reacted as if he didn’t take this offer seriously.”

Ultimately, British Foreign Minister Enthony Eden and Prime Minister Winston Churchill saw little hope that any military intervention (save the two nuclear weapons) could help the French position in Vietnam) They refused to offer their support to the United States, which enraged Dulles. Eisenhower agreed with the British, believing that a series of airstrikes alone wouldn’t help such a precarious situation like the one at Dien Bien Phu.