Exclusive interview: Army nurse on how COVID has affected the MOS - We Are The Mighty

Exclusive interview: Army nurse on how COVID has affected the MOS 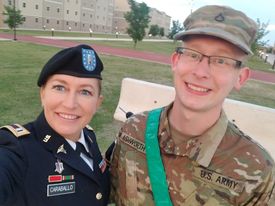 Martine Caraballo comes from five generations of military service. Her father is a Purple Heart Vietnam veteran. She was raised on Treasure Island, Florida and served four years in the Marine Corps as a Comm Center Operator. Caraballo served 10 years in the US Army as a 68W Combat Medic with ASI (Additional Skill Identifier) of M6/LPN. As an Iraq War veteran, she Deployed to Iraq in 2009-2010. She was among 39 Soldiers selected for the AMEDD Enlisted Commissioning Program (AECP).

In March 2013, Caraballo was commissioned as a 66H in the Army Nurse Corps. In her spare time she has run five Marine Corps Marathons. She is eager for the age of COVID to pass so she can run marathons once again. Currently, she is retired from the military and working in telemetry and COVID floors at Bay Pines V.A. in St Petersburg, FL. Caraballo’s sons are in the Army; one is a Medic and the other an Artilleryman.

WATM: Your career is a success story to all enlisted who dream of going Green to Gold. What was it like to become a commissioned officer and a nurse?

Well, first off it was a big sigh of relief after years of pushing myself to get this goal. The biggest take away is that persistence pays off. When I joined the Army I had this goal in mind for the Army Medical Enlisted Commissioning Program. I achieved many goals, got married and everything. I had a timeline mapped out because I needed it to happen before a certain age before commissioning. There were some setbacks from the beginning; I had a shoulder injury because of that I had to go back to the combat medic school. When I was in school, I was the platoon leader. For some people who are prior service, especially Marines, they really like to have them as platoon leaders. I graduated with honors with a 300+ PT score and then I did the LPN course. I chose to keep my LPN option because Airborne was dangled in front of me and I really wanted to do that – jump out of planes would be a lot of fun but I had to keep with my timeline. I had to be practical because an LPN gives you more job options than jump wings, right? (laughs)

I finished LPN school and arrived at Fort Bragg for my first duty station. What I did to get the college courses that were prerequisites for the nursing program, I made a deal with my boss. I said ‘Hey, I’ll work tuition assistance to pay for my school – I just had to buy my books. I would work 12 hour shifts and then do a class, go to sleep and do it all over again.’ It was exhausting but after a few eight-week semesters I had the credits I needed to apply for the nursing program and the AECP program. Then I got accepted into three universities: University of Texas, El Paso, UNC Pembrook and East Carolina University. I chose ECU because it was the closest to my family and they are very military friendly. I was accepted as an alternate because I had one more class to do. So, I was working on that when I had another setback – I got deployed.

I got 18 days’ notice because someone else couldn’t do it [due to] health reasons, so, I had to take over someone’s spot. I had 18 days to put everything in storage, do predeployment training with a new unit where I know nobody, and I had to explain the situation to the university. I paid for them to hold my seat until I returned from deployment before my classes start. That was the great thing, they seated classes in the fall and spring, so, there wasn’t much of a delay.

I was working against time. I passed my boards and got commissioned five weeks before the time cut off because of my age. It was a big sigh of relief to achieve that goal.

WATM: What new challenges has COVID-19 presented to the MOS vs civilian nurses?

It took a bit of adjusting to get used to taking care of a different population. Where I went from taking care of active duty with more trauma issues to an older population with more chronic health issues. Unfortunately, a lot of our vets have, uh, a lot of unhealthy coping mechanisms. They have a lot of substance abuse issues, so that makes me a little sad. It was a shock to go from being an officer where there is respect at the workplace with the ‘yes, ma’am, no, ma’am’ to being physically and emotionally abused at work. Nurse abuse is real. I had to develop a tougher shell.

There are challenges on many different fronts. Patients can’t have visitors, so, that makes it hard on them. Help with them healing and having to wear the mask all day for 12 hours. You get the marks on your face, your glasses fall off or fog up, indentations on your face, and having to be very careful all the time. I work in a COVID unit and sometimes there isn’t enough PPE supplies going around and you have to wear your mask for longer than what would be the ideal amount of time you’re supposed to wear it. You just worry about catching it and bringing it home. I keep sanitizer in my car, I spray my shoes and I’m super careful. This challenge is for everybody.

WATM: What advice would you give to others pursuing a military career in nursing?

Leave no stone unturned when looking for opportunities such as cross training in other specialties. For a new graduate nurse, it’s hard to get a job because they want you to have experience. So, you’re stuck in a catch 22. You can’t get experience because they won’t give you experience. In the Army we had the Brigadier General Hays Program, and it gave us six months where we follow a nurse around, first we watch then we gradually take on a patient and then another patient until you’re taking on a full load and graduating to the floor. Being thrown to the wolves, you know? (laughs)

You have the chance to work with other services and I really recommend it. They help pay for the school, they give you the training, you’re a commissioned officer – what’s not to like? (laughs)

WATM: What can the population do to better support nurses in their mission?

Pretty simple: wearing a mask and avoiding large groups. Healthcare workers are feeling frustration and fatigue with those who are willing and knowingly going to the top three modes of transmission which are: going to bars or restaurants, gyms, and places of worship. They get sick and then want treatment. It is hard to not get irritated when ‘you didn’t care for your health, so, why should we care for your health?’ (laughs). You know its frustrating for healthcare workers to risk their health and their family’s health for people who want to have a beer in a bar instead of at home.

I hear people say, ‘I went golfing without a mask’ and now you got two of your buddies sick and they wished they wore the mask because now they really can’t breathe. Another one I hear is ‘I had some friends over to play cards.’ I say ‘Did you wear a mask and use hand sanitizer?’

They can’t say the word hasn’t been getting out. It’s been advertised all over TV and the news, so, if people haven’t figured out how to be safe right now then (puts hands up in the air).

I understand people have COVID fatigue and they want to go out and you miss socializing. We have the vaccine coming, so, just hang in there. It’s coming. Hang in there a little bit longer and by the end of this year we should be able to go out and do more things once we get closer to herd immunity.

A lot of the VA’s do Homeless Stand Downs where they have folks come and try to assist veterans with legal and homelessness issues. They have clothes bins where people are able to donate clothes and whatever, they have other bins. There really is a need for mental health assistance, health providers have their hands full. I see fellas get off active duty and they kinda get lost and lose their way. They don’t have that paycheck every two weeks, they don’t have healthcare, they don’t have that barracks. Maybe they didn’t get the skills they needed in the military that translate to a good job on the outside. Make sure you have a plan before you leave; go to school or have a job lined up and everything. It’s not easy on the outside, rent is going up. Dental care, you’ll really miss that. That’s all I can say about that, really.

Use those benefits. For example, in Florida if you’re 100% disabled you get a tax break on property tax. That’s great! (laughs) Apply for the VA, you can apply for disability benefits up to 90 days before your ETS/EAS. So, get the ball rolling because it may take a couple months. Look into the other benefits that different states offer. In Florida, I think if you’re 100% rated you can get your license plate at no extra cost, so, look into it.

Stay in your fitness routine! People get out of the service and they stop working out.

(we laugh) I call it the civilian 15. When you first go to college you’re going to gain some weight (laughs).