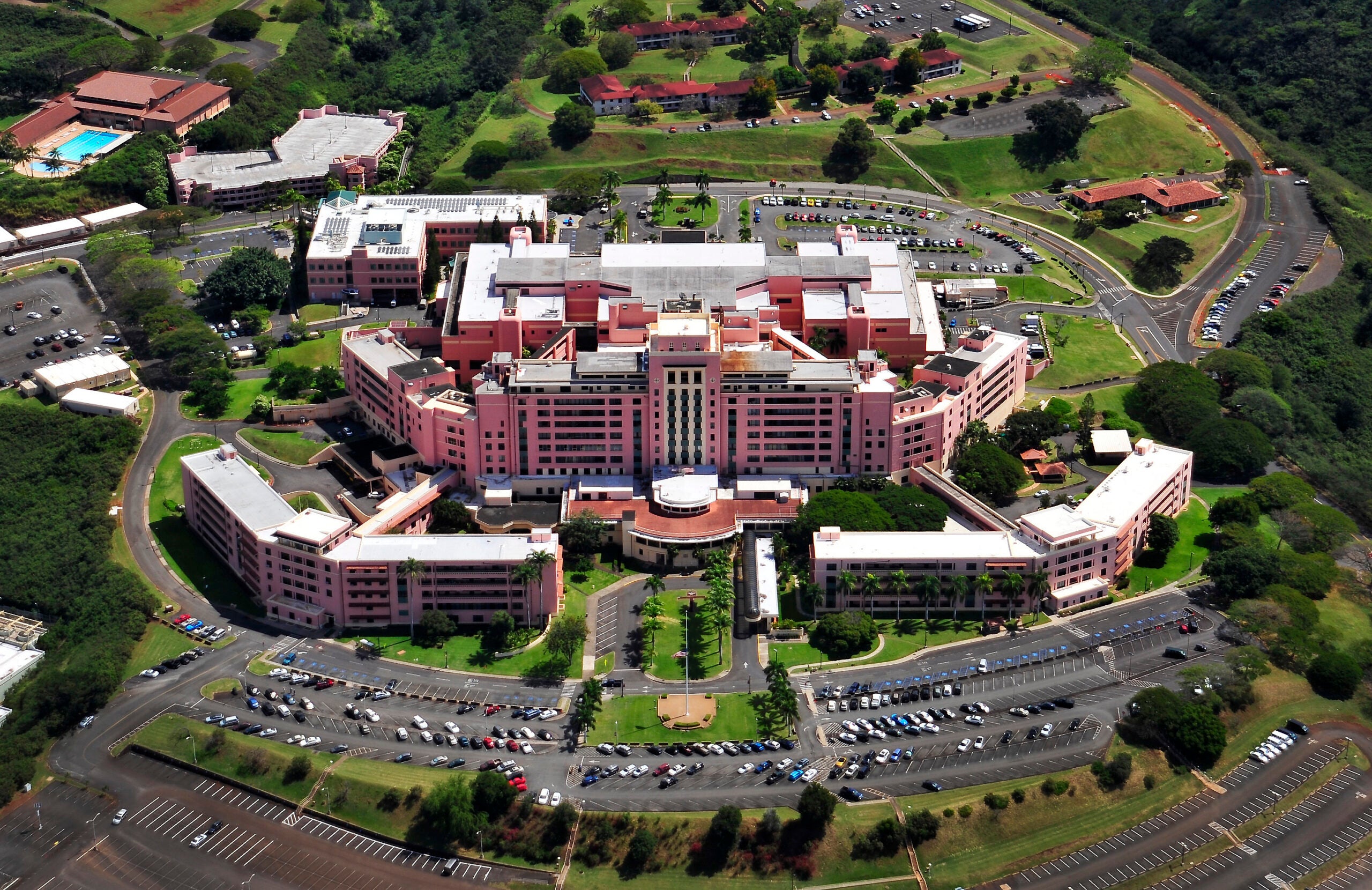 Tripler Army Medical Center is the headquarters of the Pacific Regional Medical Command of the armed forces in the state of Hawaii. (U.S. Navy photo by Mass Communication Specialist 1st Class Daniel Barker/Released).

Tripler Army Medical Center (TAMC) is the only federal care hospital in the entire Pacific Basin. Collectively, it supports over a quarter of a million local active-duty and retired service members, families, and veterans in the Oahu, Hawaii region. In fact, TAMC is one of the most modern medical facilities globally.

You can spot the TAMC from any point in the Honolulu district because of its distinctive coral-pink color. Apparently, the color choice is either the result of a Soldier ordering 30 million gallons of the wrong color … or that the design elements were modeled after the Royal Hawaiian Hotel. It’s no surprise that Hawaii is the headquarters of the United States Pacific Command (USPACOM). So, after you get over the excitement about PCSing to Schofield Barracks or TAMC, you probably have many questions. This guide will help you make sense of what will be one of the best duty stations of your life!

TAMC is located in Oahu, Hawaii.

If you’re driving, when you leave the airport, follow the H1 west and take an exit after H-2 called Kunia Rd. Once you turn onto Kunia Rd, it’s a 2-mile drive from there.

To get to the Inn at Schofield, make a right at Kolekole Ave and go through the first traffic light. Continue until you reach the third traffic light and turn right.

As you might expect, you’ll be flying to your new post at Tripler! So that means the nearest airport is the Honolulu International Airport. Commute times to Tripler should take about 15 minutes.

Service members and families can take advantage of both TAMC resources and the resources available at nearby Hickam Air Force Base as well as Schofield Barracks/Fort Shafter.

Tripler Army Medical Center is part of Schofield Barracks, home of the 25th Infantry Division. The 25th has played a part in defending Hawaii for nearly 100 years.

Schofield Barracks serves as the base for service members maintaining Pearl Harbor and the primary defense for the island of Oahu.

TAMC’s history dates to 1907, when it was part of Ft. Shafter. The present-day campus opened in 1948. The barracks were built around the same time as new work was completed on Pearl Harbor itself. When constructed, it became the largest U.S. Army post of its kind and was designed to house cavalry, light infantry, and artillery forces. Read more about Pearl Harbor’s fascinating history here.

Schofield Barracks was named for Lieutenant General John M. Schofield, who was the first person to recognize the urgency to establish a base in Oahu. During his time in service, Schofield served as the Secretary of War and the U.S. Army Commanding General, earning a Medal of Honor.

Schofield Barracks and nearby Wheeler Airfield in Hawaii were damaged during the attack on Pearl Harbor and saw a lot of casualties as a result. Today, Soldiers reside there, but it is also home to Airmen, family members, and around 7,000 civilians.

Things to Do Around Tripler Army Medical Center

Once you’re on the island, it can be overwhelming to know where to go, but don’t worry! Paradise is awaiting, and there are plenty of great places to live, lots to see and do, and plenty to learn.

Hawaii’s food culture has a lot of similarities to Asian food. There are foods such as rice, seaweed, macaroni salad, kimchee, and long-grain rice. Taro, coconut, seafood, and pork are common foods found throughout the island. While in Honolulu, be sure to try the local specialties for unique and flavorful culinary delights!

Beyond the many beaches and marinas, the island of Oahu has numerous excellent tourist attractions and museums.

The Honolulu Zoo features over 1,200 animals in specially designed habitats and is located on 42 acres in Queen Kapi’olani Park. Nearby, don’t miss out on visiting Iolani Palace. It’s the only royal palace on U.S. soil. In fact, this is where Hawaiian kings and queens called home! These days, it’s a museum, so you don’t want to miss out! You’ll also want to visit Kualoa Ranch, a 4,000-acre nature retreat where you can ride ATVs, mountain bikes, or horses. Don’t miss out on touring the filming locations for over 50 movies and T.V. shows, including 50 First Dates, Hawaii Five-O, and Jurassic Park.

As you might expect, housing is in high demand on the island. That means the most critical thing you can do is call the Military Housing Office as soon as you receive orders. Otherwise, your housing experience might be less than great. Wait times can vary depending on the season but average from a few weeks to several months. No one wants to live in temp lodging for that long, so call ahead of time!

Island Palm Communities owns and manages on-post housing. Two-bedroom duplet and apartment-style residences are available for unaccompanied personnel. Family homes are two- to five-bedroom residents in all styles. If you plan to live in privatized housing, speak with the MHO for more information.

It’s probably no surprise that there are no schools on post for mil-kids who call Tripler home. However, kids who live on post will attend schools in the surrounding communities. School districts are divided into complexes. Schofield Barracks is located in one of the central areas called the Leilehua-Mililani-Waialua Complex. Speak with the Schofield Barracks School Liaison Office for current enrollment requirements. Read more about PCSing to Schofield here.

Where is Tripler Army Medical Center?

TAMC is part of Schofield Barracks in Hawaii.

Who can be seen at Tripler Army Medical Center?

Is there an emergency room at Tripler Army Medical Center?

Yes, the medical center has an emergency room.

How do I make an appointment at Tripler Army Medical Center?