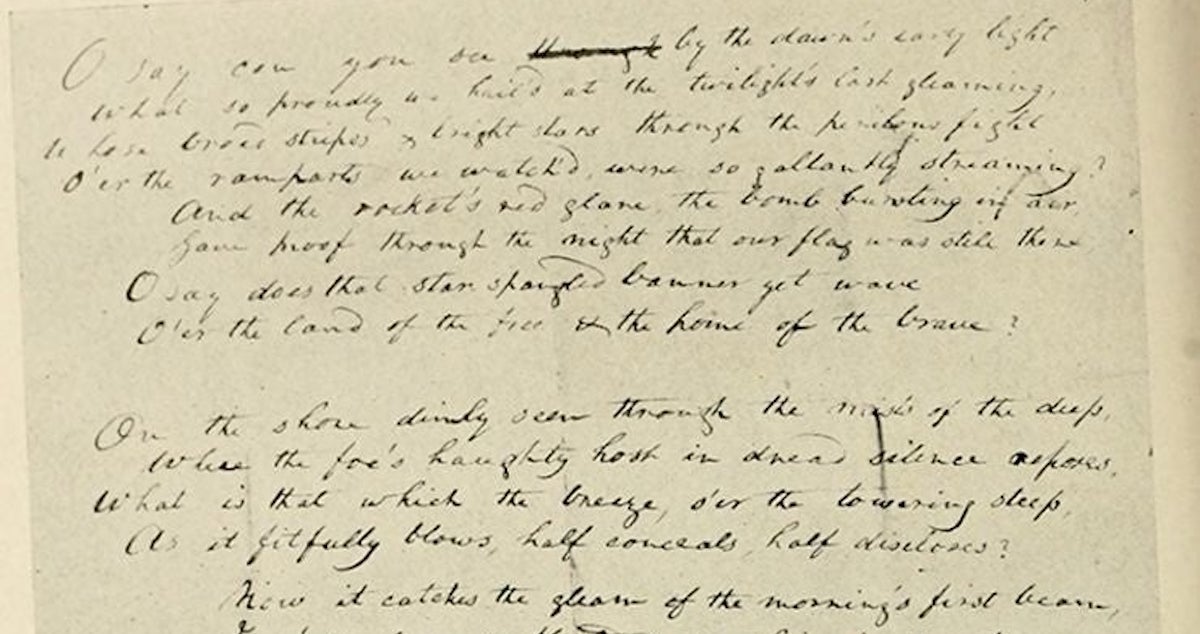 On Sep. 13, 1814, Francis Scott Key wrote the poem which would later be set to music and, in 1931, become the Star-Spangled Banner — and America’s national anthem.

Originally titled “The Defence of Fort McHenry,” the poem was written during the Battle of Baltimore in the War of 1812, when a lone U.S. flag flew over the fort at daybreak despite Britain’s assault.

Francis Scott Key stood aboard the British ship HMS Tonnant, negotiating the release of Maryland resident Dr. William Beanes. Having succeeded in his mission, Key and the newly-freed Beanes watched the battle unfold from their enemy’s decks. At the sight of the raised American flag, Key was struck by a burst of poetic inspiration. He quickly scribbled a series of verses on a scrap of paper, not knowing these words would become an enduring symbol of American patriotism.

After being circulated in newspapers, composer John Stafford Smith set the poem to the music of a song called “To Anacreon in Heaven,” which, by the way, was a popular drinking song.

Yes. Our national anthem is based on victory in battle and drinking.

The flag that flew over Fort McHenry was ordered by Major George Armistead, who wanted “to have a flag so large that the British will have no difficulty in seeing it from a distance.” He got his wish — and today that flag is displayed in the Smithsonian in Washington D.C.

Francis Scott Key’s poem, by the way, had more than the verse that would become immortalized in our nation’s history. Here is the full text:

O say, can you see, by the dawn’s early light,
What so proudly we hailed at the twilight’s last gleaming?
Whose broad stripes and bright stars through the perilous fight,
O’er the ramparts we watched were so gallantly streaming;
And the rocket’s red glare, the bombs bursting in air,
Gave proof through the night that our flag was still there;
O say, does that star-spangled banner yet wave
O’er the land of the free, and the home of the brave?

On the shore dimly seen through the mists of the deep,
Where the foe’s haughty host in dread silence reposes,
What is that which the breeze, o’er the towering steep,
As it fitfully blows, now conceals, now discloses?
Now it catches the gleam of the morning’s first beam,
In full glory reflected now shines on the stream;
‘Tis the star-spangled banner; O long may it wave
O’er the land of the free, and the home of the brave!

And where is that band who so vauntingly swore
That the havoc of war and the battle’s confusion
A home and a country should leave us no more?
Their blood has washed out their foul footsteps’ pollution.
No refuge could save the hireling and slave,
From the terror of flight and the gloom of the grave;
And the star-spangled banner in triumph doth wave
O’er the land of the free, and the home of the brave!

O! thus be it ever, when freemen shall stand
Between their loved homes and the war’s desolation!
Blest with victory and peace, may the heav’n-rescued land,
Praise the power that hath made and preserved us a nation.
Then conquer we must, for our cause it is just.
And this be our motto— “In God is our trust; “
And the star-spangled banner in triumph shall wave
O’er the land of the free, and the home of the brave.