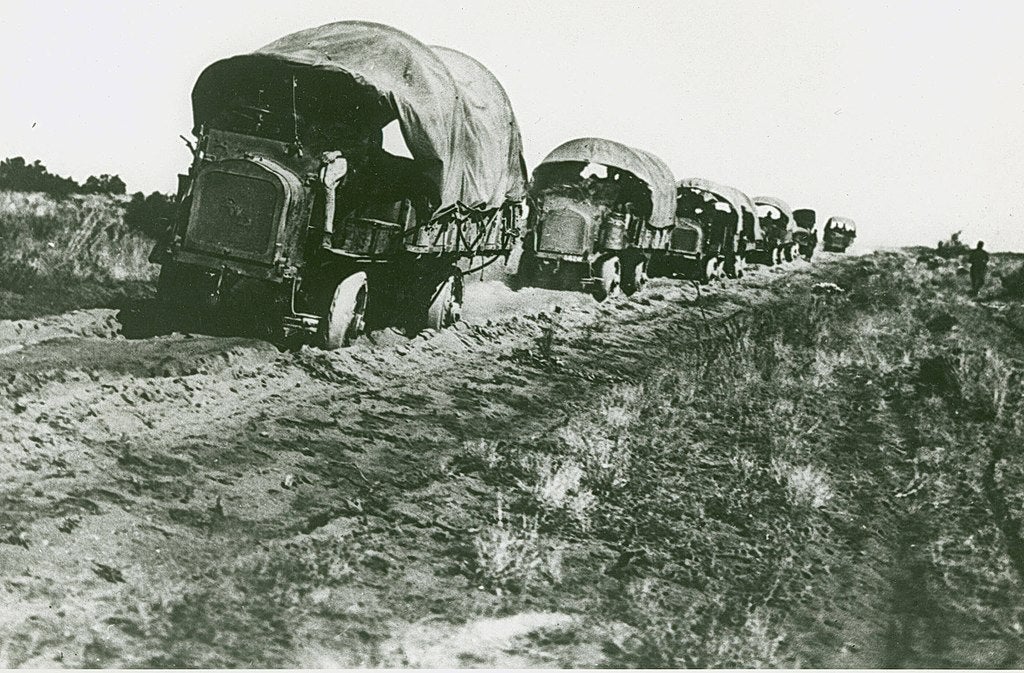 A motorized convoy makes its way down a rutted road. (U.S. Army photo).

There are a few military legends whose careers started in auspicious ways. Custer graduated last in his class from West Point and lucked into a meeting with Winfield Scott. Chesty Puller earned his butter bar, was demoted to corporal, and then fought as a loaned officer in the Banana Wars. And George S. Patton got himself a touring car and led what was quite possibly the first American car assault in history. He later pointed out this tidbit to his superiors in order to become America’s first tank officer.

George Patton graduated West Point in 1909, at a real lull between extreme fighting. America was only 10 years out of the Spanish-American war and had only slowly invested in new military equipment post-war. But it needed a strong military to defend a much larger empire. America now included Puerto Rico, Cuba, the Philippines, and Guam, all taken from Spain, as well as Hawaii. Meanwhile, Britain and Germany were in a full-fledged arms race.

So Patton joined the active Army when spending couldn’t keep up with mission creep, European rivals were modernizing much faster than the U.S., and World War I — while unbeknownst to anyone who wasn’t wearing a tinfoil hat — was on the horizon. This might seem like a risky career move for anyone else. But Patton was a high achiever.

George quickly went from new graduate to Army Olympian (he placed fifth in modern pentathlon) to master of the sword (a real title back then). Then, in 1916, he joined the staff of Brig. Gen. John J. Pershing. The unit soon led the “Punitive Expedition, U.S. Army” to capture or kill Francisco “Pancho” Villa. Pancho Villa was a Mexican Revolutionary who had attacked the U.S. town of Columbus, New Mexico.

Here, George Patton would distinguish himself as, arguably, America’s first armored officer. See, modern armored conflict basically hadn’t existed up to this point. After all, the car was about 30 years old when Patton, Pershing and their 10,000 most violent friends crossed the border. The Army was trying out quite a few newfangled inventions during this expedition, including some of its first cars and planes.

Second Lt. Patton received command of three Dodge touring cars and took them on small missions, including a fateful foraging mission on May 14, 1916. This is worth underlining: Patton was basically on a grocery run. All he was supposed to do was find and purchase food for the men and animals. But this is George S. Patton we’re talking about. And he had an interpreter, E.L. Holmdahl. An interpreter who used to be a bandit. A former bandit who could recognize folks who were still bandits.

Holmdahl noticed a former comrade who was still a bandit. And he told little Lt. George S. Patton, future General of the Armies and father of the armored branch, that a bandit was in the market with them. Did Patton slowly sneak away to telegraph his superiors? Request air assets for a chase? Try and find more men for a proper blocking position?

Nope. Patton knew that a senior aide to Pancho Villa was supposed to be hiding nearby, and he decided this was his sign that he should find and capture him. He took his three touring cars to the nearby San Miguelito Ranch to conduct a search. He sent two cars with eight soldiers to cover the south side of the ranch while he and three more men approach the main gate on the north side.

As Patton drew close on foot, riders burst from the gate, spotted the officer and his men, and wheeled to face them. The former Olympic shooter took aim and quickly shot through the arm of the lead rider, breaking it. Then he shot the man’s horse.

A short shootout with the other two riders commenced. Patton killed the next horse and rider in quick succession. The third rider went down in a hail of rifle fire from Patton and his men.

Holmdahl gave chase to the first rider, the one with the broken arm and a dead horse. It would turn out this was Capt. Julio Cardenas, the leader of Pancho Villa’s bodyguard. Yup, Patton’s first shots in combat had wounded the senior aide to the enemy commander.

Holmdahl reportedly gave Cardenas a chance to surrender, and Cardenas signaled that he was doing so. But Cardenas then grabbed his pistol and took a shot. It missed Holmdahl, and Holmdahl dropped Cardenas then and there.

Patton attempted to hold the ranch with the armored cars after he secured the three bodies to them. But a force of 50 riders attacked the three cars and Patton ordered a withdrawal north to U.S. forces.

Brig. Gen. John Pershing was less than excited when Patton showed up with three bodies bloated from sitting on hot hoods under the hot sun. He ordered the men immediately buried.

But Patton got his first taste of combat. And newfound fame quickly followed. Newspapers covering the 2-month-old conflict dubbed Patton the “Bandit Killer.”

When the U.S. entered World War I, Patton was eager to lead tanks. The new weapons in French and British forces had been described in American newspapers, and Patton wanted in. Luckily for him, his old boss, Pershing, was in command of the American Expeditionary Force. Patton wrote a letter reminding his boss of his armored car assault and asked permission to lead an American tank unit in France. Pershing agreed and put Patton in charge of the school for U.S. tankers. And Patton took the first graduating class with him into combat in France.

Basically, all because he screwed up a grocery run and came back with three bodies instead of any forage.