The most intense air battles of WWII - We Are The Mighty 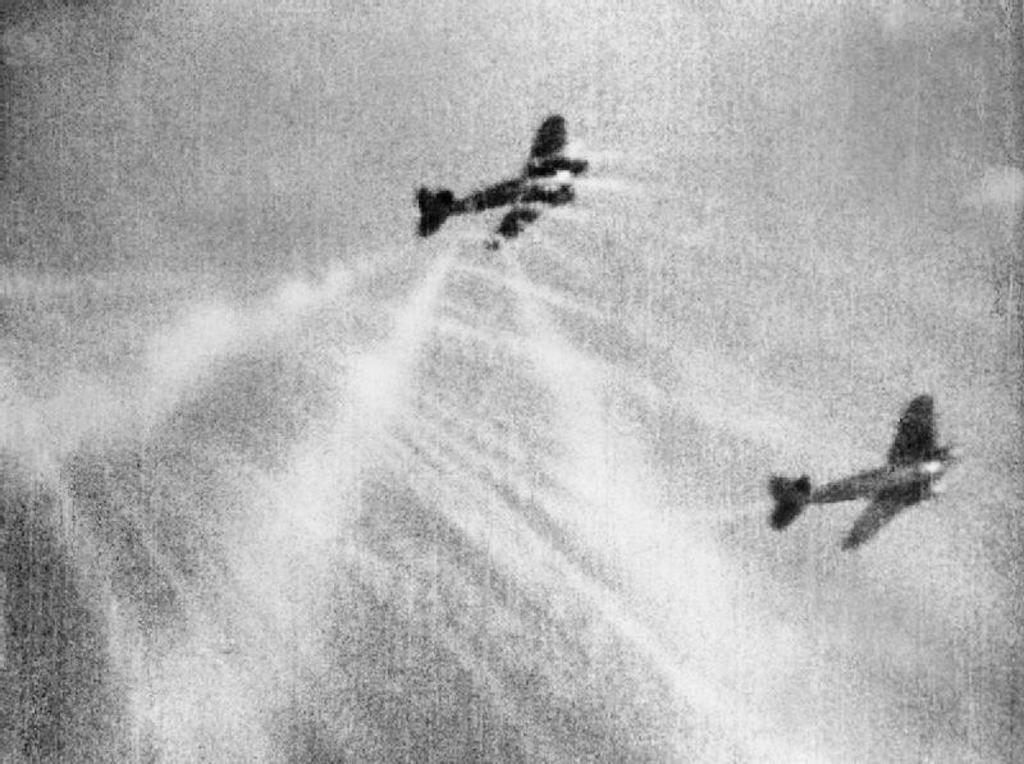 Gun camera film shows tracer ammunition from a Supermarine Spitfire Mark I of 609 Squadron, flown by Flight Lieutenant J H G McArthur, hitting a Heinkel He 111 on its starboard quarter.

World War II is one of the most uncertain times in the history of mankind. Never before had man taken to the skies to fight air battles and control the air space on a violent scale. The war without a doubt advanced technology in the art of death. The application of radar, gyroscopic sights, Radio communications and explosive engineering painted the skies in brilliant red and black in both theaters of war. The application of air and anti-air tactics was sometimes more dangerous than living in a fighting hole. With the very real risk of death, WWII era pilots raced towards the sounds of chaos and turned the tide more than once.

One of the most important lifelines to any military is their ability to organize their logistics to the frontlines. Truk Island was key to the Imperial Japanese fleet since WWI when it was captured from the Germans and fortified. The Secretive base was rumored to have near impregnable defenses. However, Commander of the U.S. Pacific Fleet, Admiral Chester Nimitz decided to launch Operation Hailstone against the tiny atoll. Achieving air superiority was key to denying the enemy the ability to continue operations. Japan was also struggling to make enough fuel to keep the Imperial Fleet afloat. The importance of the ports, airfields and other infrastructure on Truk Island is comparable to Pearl Harbor. Attacking the Imperial Fleet while docked at Truk Island is a symbolic victory as much as a tactical one. None would have been possible without the bravery of the pilots flying head first into the fight.

The battle of Guadalcanal is the turning point in the Pacific theater when the tide turns against the Imperial Japanese forever. It was an intense battle in the air, land and sea with heavy losses on both sides, The Imperial Japanese lost two battleships, four cruisers, one light carrier, 11 destroyers, and six submarines. The United States lost eight cruisers, two heavy carriers, and 14 destroyers during the battle. The outcome would have fared far worse if it wasn’t for the aces up Uncle Sam’s sleeve. Yet, in spite of the casualties, the United States was able to permanently shift the balance in the war in our favor. The battle is one of the Navy and Marine Corps’ finest hours.

One of the biggest weaknesses of all aircraft is that they have to land and refit. Unless science can come up with an Ancient Aliens style power source that can keep aircraft in the sky indefinitely, it is a universal Achilles’ heel. Striking grounded aircraft is an excellent use of the element of surprise to catastrophic effect. The 47th fighter squadron adapted and overcame. From hunter to hunted and back to hunter again. The Imperial pilots were no match for American aces even when airborne.

A month after Winston Churchill gave his famous We shall fight on the beaches speech, Hitler double downed and commenced the Battle of Britain. Its steadfast defense against Nazi bombardment was the subject matter for several books and adaptations. All stratus of society were affected by the air raids over London. Residents of all social classes were displaced as the Royal Air Force battled the Luftwaffe. Although the Reich had the raw numbers and superior aircraft, the British had early warning radar systems to scramble fighters to intercept bombers. Much of the Nazi tactics in the air, land, and sea relied on the element of surprise in order to conduct a successful offensive. Without it, the allies could establish a foothold to land the hundreds of thousands of troops needed to liberate Europe.

Admiral Isoroku Yamamoto of the Imperial Japanese Navy was responsible for the attack on Pearl Harbor. The American military would finally be able to take revenge on the actual person who was the most responsible for causing so much pain and death with a dishonorable sneak attack on US soil. Yamamoto was not a run-of-the-mill Admiral the Japanese could afford to lose. He was the Marshal Admiral of the Imperial Japanese Navy (IJN) and the commander-in-chief of the Combined Fleet. His death was not only a tactical blow for the Imperial Navy but a reverberating morale reducing shockwave throughout Japan. This is the most important intercept of the entire war and it was a flaming success.