Happy birthday, Navy! A guide to America's naval force - We Are The Mighty 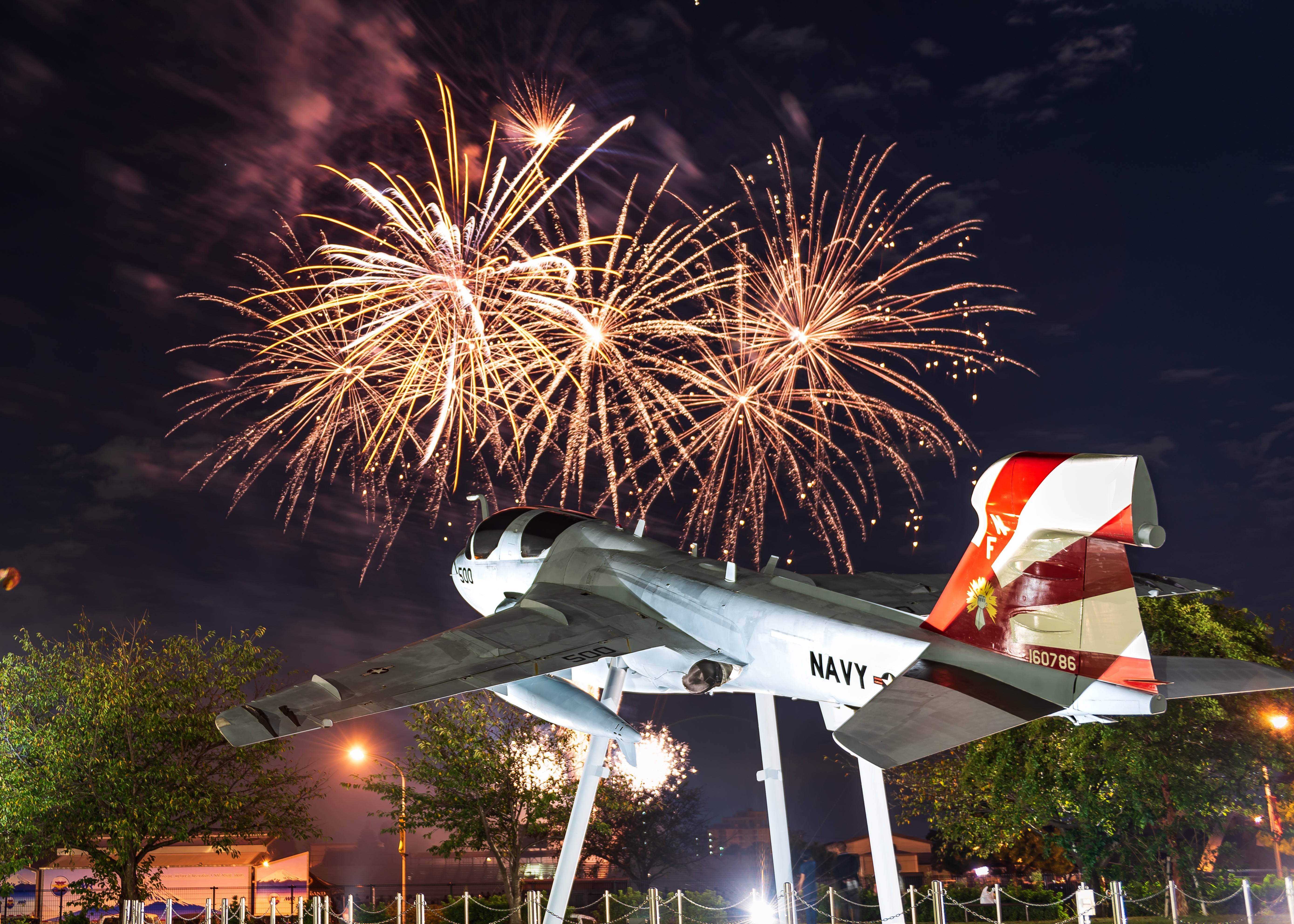 Today, we recognize another U.S. Navy birthday! To celebrate, here’s everything you should know about America’s Naval force – including some inspiring ship mottos.

Everything You Need to Know about the Navy

In 1775, America’s first Continental Congress voted to outfit two sailing vessels with carriage and swivel guns. Their mission was simple: Disrupt British supply ships and intercept transports carrying munitions. This was a significant decision for the Continental Congress since we’d only been fighting the British since the spring of 1775. Some viewed the move as too bold. Others, like John Adams and George Washington, knew that if America was going to gain its independence, we’d need to be able to defend ourselves.

And so, the Navy was born.

It quickly grew into a formidable force. During our War of Independence, the Continental Navy sent more than 50 armed vessels to sea. Squadrons and cruisers destroyed enemy vessels, capturing nearly 200 British ships in the process.

Since then, we celebrate the Navy’s birthday on October 13. On this day, we honor the sacrifice of today’s sailors and the grit of those first members of the Continental Congress. They looked at the open seas as a challenge, not a defeat.

As soon as the Navy (as we know it today) was established in 1798, the fleet got to work ensuring America’s waters and shorelines stay safe and protected.

In fact, it was during the War of 1812 the Navy got its first real test — in the Battle of Lake Erie. After the British captured Detroit, the two navies got after it on September 10, 1813, at Put-in-Bay in Ohio. By the end of the battle, America won and regained control of the lake.

Fast forward a century and a few decades, one of the most significant Navy battles occurred during WWII. Before America entered the war, German U-boats had the run of the water and were doing all they could to sink British ships. Enter the American Navy, and things slowly started to change. That’s because of our use of enhanced radar, anti-sub mortars, and our ability to intercept and read radio transmissions from the Germans.

These days, Navy battles aren’t as commonplace as during past conflicts. However, America’s Navy still plays a vital role in our nation’s defense.

Of course, a military branch this old has seen its fair share of notable veterans. In fact, millions of sailors have crossed vessels during the Navy’s long history, so there’s no way to ever make a list that’s 100% complete. However, some seriously famous veterans once rocked the Navy whites. From sports icons — David Robinson, Roger Staubach and Yogi Berra to name a few, to presidents — JFK, Jimmy Carter and George H.W. Bush all served in the Navy, plenty of household names got their starts as sailors.

First up, Humphrey Bogart, who enlisted in the Navy in 1918. As America braced for the Great War, Bogart leaned into his new career as a sailor. Rumor has it he even perfected his cinematic scar and subsequent lisp while serving.

Montel Williams once graced afternoon television, but he got his start as a sailor, too. In fact, he’s a dual veteran, having first served in the Marine Corps. After earning the rank of Corporal, Williams was then accepted into the Naval Academy in Annapolis. He became a midshipman and graduated in 1980 as a Restricted Line Officer. But that wasn’t enough for Montel. He became a Naval Cryptologic Officer and eventually retired as a Lieutenant Commander.

Other notable show biz vets include Johnny Carson and Jesse Ventura, who, before he was a politician, wrestled for the WWG.

We All Owe This Veteran a Lot

The world would not be what it is today without the contributions of Grace Murray Hopper. This Naval Reserve veteran developed COBOL – a computer programming language widely considered the genesis of all code today. In fact, any time a techie says they found a “computer bug,” they’re quoting Hopper. While taking apart a Mark I computer, she found a moth caught in a relay, and the saying was born. Hopper retired as a commander and was called back to active duty just one year later. She was promoted to captain in 1973.

Ever wonder about the distinct Navy flag? Here’s how America’s Navy got its colors. Even though the Navy is one of America’s oldest military branches, it didn’t get its own seal until 1957. And then it took two more years for the Navy to get its own flag. The reason is twofold. First, the earliest Continental Navy ships all flew a variety of standards, ranging from the Grand Union to flags with pine trees or rattlesnakes. But it took until the nineteenth century for the Infantry Battalion flag to get a foothold in the world of Navy flags. The blue flag depicts a white diamond shape in the center with a blue foul anchor superimposed. This is the flag the Navy flew – unofficially, of course – for 60 years!

These days, things are a bit different. A Presidential Order back in 1959 changed the game, and now the official Navy flag is specific and exact, just like other Navy standards. It must be “4 feet 4 inches hoist by 5 feet 6 inches fly, of dark blue material, with yellow fringe, 2 1/2 inches wide.” The Presidential Order also states that it uses “circular yellow rope edging. On the flag is a yellow scroll must be inscribed, “United States Navy,” in dark blue lettering. Talk about specific.

Here’s a fun fact! Unlike all the other flags you might find on a vessel, like a commission pendant, union jack, or even the national ensign, the Navy flag is reserved for display purposes only!

Mottos have serious morale-boosting power and can help a unit come together in good times and in bad. So it might surprise you to learn that the Navy doesn’t have an official motto. While there are certain mottos for ships and groups, there’s no unifying statement for the branch.

The Navy Core Values teach “Honor, Courage, Commitment,” but it’s not an officially recognized motto. Another popular one is “Non sibi sed patriae” – “Not for self but country.”

Of course, lots of Navy groups have their own mottos. The SEALs, for one, live by, “Ready to lead, ready to follow, never quit.” Sounds very on-brand for them. They also like to remind themselves, “The only easy day was yesterday.” That’s all facts when you’re a SEAL.

On board certain ships, you’ll find the sailors preaching specific mottos. Here are some of our favorite ship slogans from aircraft carriers.

The USS Abraham Lincoln (CVN-72) reminds its sailors they “Shall not Perish.” Ominous but a good reminder, especially when they’re cruising out in the middle of nowhere. Speaking of America’s 16th president, here’s an overview of things you might not know about Honest Abe.

On the USS Carl Vinson, sailors like to take “Vis Per Mare” – that’s strength from the sea.

Meanwhile, aboard the USS Theodore Roosevelt, the crew keeps “Qui Plantavit Curabit,” close to their hearts. “He who has planted will preserve.” Well said.

Want to find out more about military mottos? Here’s a list of the 19 best. Apparently, these seven came straight out of combat, earning them even more unit cred.

How do I join the Navy?

Speak with a recruiter to find out more about potential career options.

Does the Navy have a military academy?

It sure does! The United States Naval Academy is a federal service academy in Annapolis, Maryland. Since 1845, it’s been producing Sailor leaders for America’s Navy.

Is the Navy a good branch to join?

The Navy offers several career options for you, so if you like water, vessels, and traveling the world, it might be perfect.

Where does the Navy deploy to?

Where you’re stationed will determine where you deploy. If you’re on ships and subs stationed in Norfolk, you’ll probably head to the Atlantic Ocean, the Mediterranean Sea, or the Coast of Africa. From the west coast, you’ll often head to the Asian-Pacific theater.