The longest-serving U.S. commander in Afghanistan stays strapped - We Are The Mighty 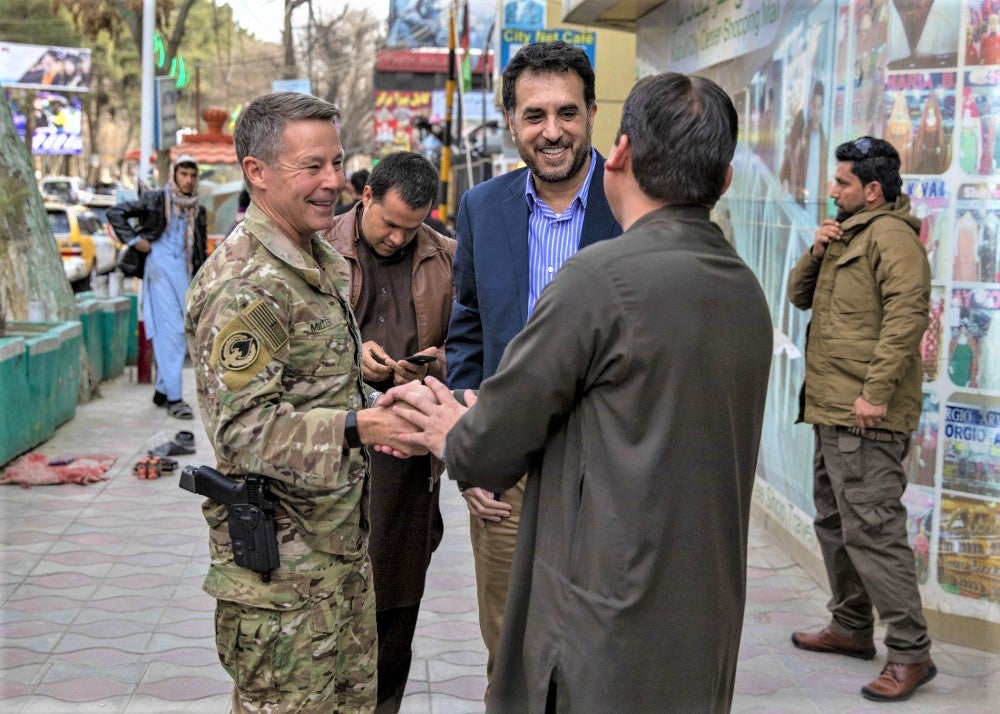 On Friday March 5, 2021, General Austin “Scott” Miller marked 915 days as the head of the U.S.-led NATO coalition in Afghanistan. He is the longest-serving commander of the war in Afghanistan. The previous commander, General John Nicholson, held the position for 914 days until the change of command on September 2, 2018.

Miller is no stranger to the harsh realities of combat. He graduated from West Point in 1983. After completing Ranger school, his first unit was the 82nd Airborne. After that, he became a platoon leader in A Company, 2nd Ranger Battalion, 75th Ranger Regiment. Miller went on to become an instructor at the Special Operations Division School of the Americas at Fort Benning, Georgia.

In 1992, he passed selection and was accepted into the elite 1st Special Forces Operational Detachment – Delta, better known as Delta Force. His combat record includes Somalia, Bosnia, Iraq, and Afghanistan. Prior to assuming command of U.S. Forces – Afghanistan and Operation Resolute Support, Miller served as the commanding general of Joint Special Operations Command.

Just over a month after he took over in Afghanistan, Miller was taking rounds. On October 18, 2018, the bodyguard of a provincial Afghan governor opened fire during a meeting between Afghan officials and U.S. generals. The insider attack killed two high-ranking Afghans and wounded two Americans, including Brig. Gen. Jeffrey Smiley, ORS commander in southern Afghanistan. Miller drew his sidearm, but was not wounded. Rather than evacuate under the protection of his security detail, he waited until the wounded were taken care of and left on the same helicopter as them.

Clearly, Miller is no armchair general. Despite his stars, he remains a warrior commander on the battlefield. This is also seen in his choice of weaponry. Most general officers are inclined to carry the standard-issue sidearm, the M17/M18 MHS which replaced the old M9. As a high-ranking officer with a security detail, it can be seen as unnecessary for a general to carry anything more. Miller, who was vindicated in the 2018 insider attack, believes otherwise.

The general is often seen carrying a kitted out handgun, rifle, or both. One such weapon is his .45 ACP 1911 handgun. A popular choice for elite units like Delta Force, Marine Force Recon, LAPD SWAT, and the FBI’s HRT, Miller was first issued a 1911 in 1992. According to Army spokesman Col. David Butler, the .45 on the general’s hip was issued as his assigned weapon in 2009. Where Miller’s 1911 all-steel, big-bore, old-school firepower, his other handgun of choice is modern perfection.

Glock pistols are quickly becoming the go-to pistol for elite military units like the Navy SEALs and MARSOC. The polymer-framed pistols have long-been the choice of law enforcement agencies, most notably the FBI. Although the Glock lost to Sig Sauer for the Army’s new standard-issue sidearm, it hasn’t stopped operators from carrying tricked out Glocks. Miller’s Glock has been seen outfitted with an extended magazine baseplate, a reflex red dot sight, and a compensator on its threaded barrel.

When it comes to personal security, General Miller doesn’t mess around. Although he turns 60 in May 2021, he shows no signs of slowing down. The general maintains his special forces roots and remains ready for a gunfight at any time.