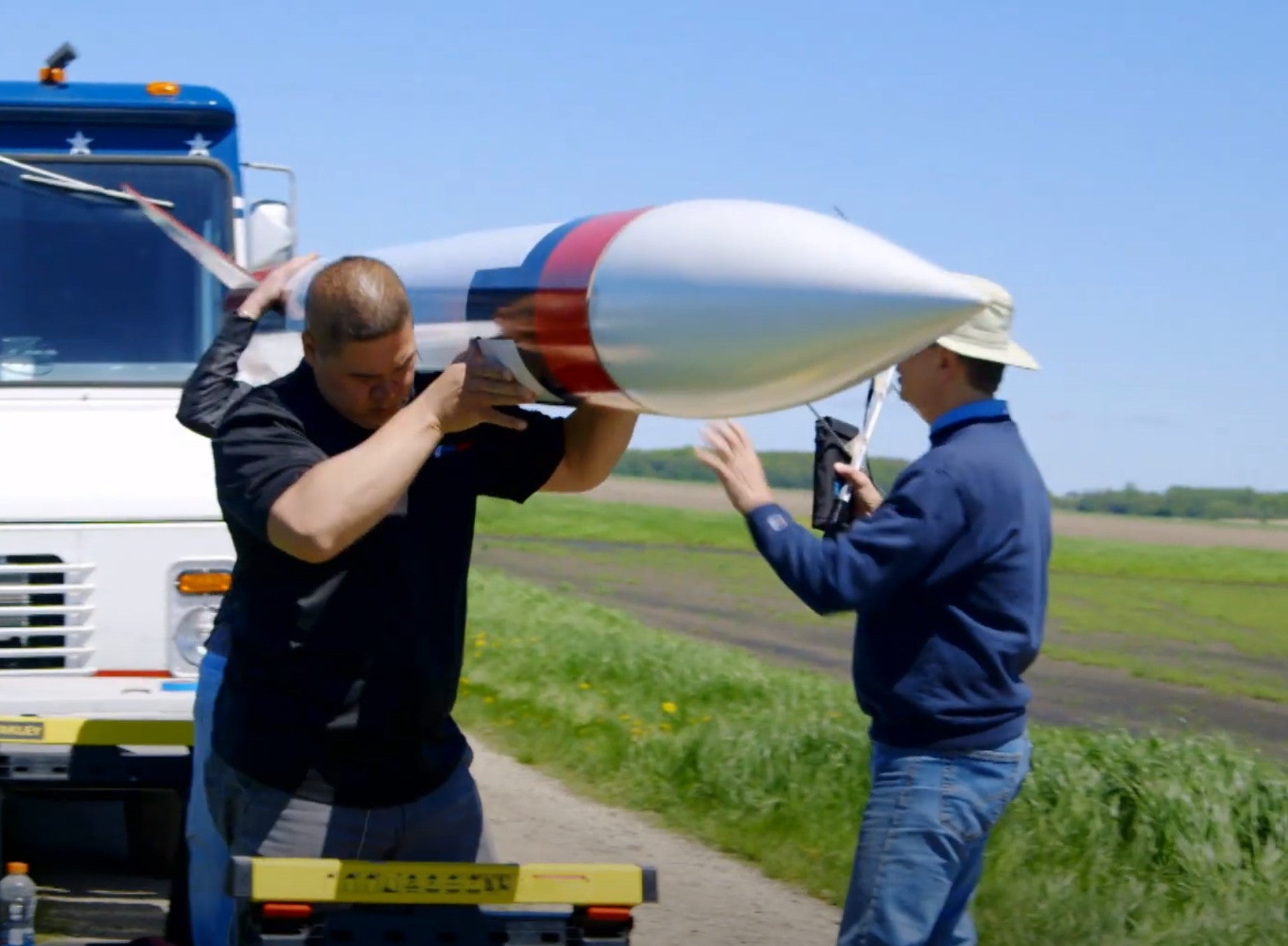 The real-life “Rocketman,” Ky Michaelson, is the first civilian to build and launch an unmanned rocket into space. He’s working together with his son, Buddy, and entrepreneur Kurt Anderson – “The Rocketboys” – to take his skills to new heights. Ky hopes to become the first amateur to build and launch a fuel-powered, manned space rocket. Along the way, Ky and the Rocketboys built a rocket sled, in which Kurt attempted to break the land/ice speed world record. ‘Homemade Astronauts’ is available to stream Thursday, May 13, on discovery+

What is your favorite thing about rocketry?

Well, I’ve been building rockets ever since I was 13 years old and I’m 82 now. So, just the thrill of it. Developing rockets. Building rockets. We were the first amateurs to put a rocket into space. That was our really big goal at the time. We did that and now we’re looking at doing other things – much bigger.

What sets you apart from your rivals?

I’ve got an old saying: ‘You can’t be beat if you don’t quit,’ and I’m the kind of guy that don’t quit. I’ve been able to do many things in my life. We’ve set 72 state and national speed records with rocket-powered cars and snowmobiles. I just never quit. I keep pounding away until we accomplish what we set out to do. That’s why I’m always confident in our successes. I don’t quit, I keep at it.

What kind of tech do you use in your homemade rockets?

Now-a-days there is all kinds of technology involved in homemade rocketry. We built a lot of solid motors and a lot of liquid motors. I’ve also brought on people that have helped me through the years. Especially with the internet, anything and everything that you want to know, it’s on there. That’s helped a lot. I started out with a chemistry set way back in the 50s not knowing anything. The only thing I knew how to do was make black powder. We progressed from black powder to zinc to sulfur. Then we started to get into liquid motors like hydrogen-peroxide motors and on. I continue to keep getting bigger and bigger in regards of propulsion.

This is extremely dangerous — even to on-lookers. What safety precautions do you take on launch day?

It’s all about distance. The further away you are from something you’re going to be much safer. We don’t have crowds. There are certain laws in effect with the FAA (Federal Aviation Administration); it’s all about safety. Get the right distance you have to be away from everything.

What is it like to work together with your son to achieve your dreams?

That was a really a big thing for me, to be able to work with my son. He’s following in my footsteps. In fact, he’s launching a rather big-sized rocket that he built on his own. I taught my son how to be a perfectionist in what he builds. He’s really intense and he’s really doing a really good job with this. I’m really proud how he’s gone on with this whole thing.

As mentioned in the show, this is not cheap. What is your strategy for fundraising?

(Laughs). I’ve used a lot of my own funds, that’s for sure. We’ve done some promotional things like the GoFast company when we put our rocket into space. They’ve helped fund us a couple of times. I’m always looking for people to help fund [projects]. Up to that point I did most of the funding myself.

Is there anything that you would like to say to the military audience?

If you have a dream, follow that dream and never stop. I’ve lived my life that way. I’ve proven it to be a successful thing all my life. I haven’t just talked about it, I’ve done it. I have an old saying, ‘The harder I work, the luckier I get.’

What’s next for you?

We’ve started to get into other propellants that we’ve never used before. So, we’re mainly working on new propulsion. If you go to our YouTube channel we have over 200 videos or go to my website http://kymichaelson.us/ and see all the things I’ve built over the years.

‘Homemade Astronauts’ is available for streaming Thursday, May 13, on discovery+