This veteran wants you to ‘Grill Your Ass Off’ 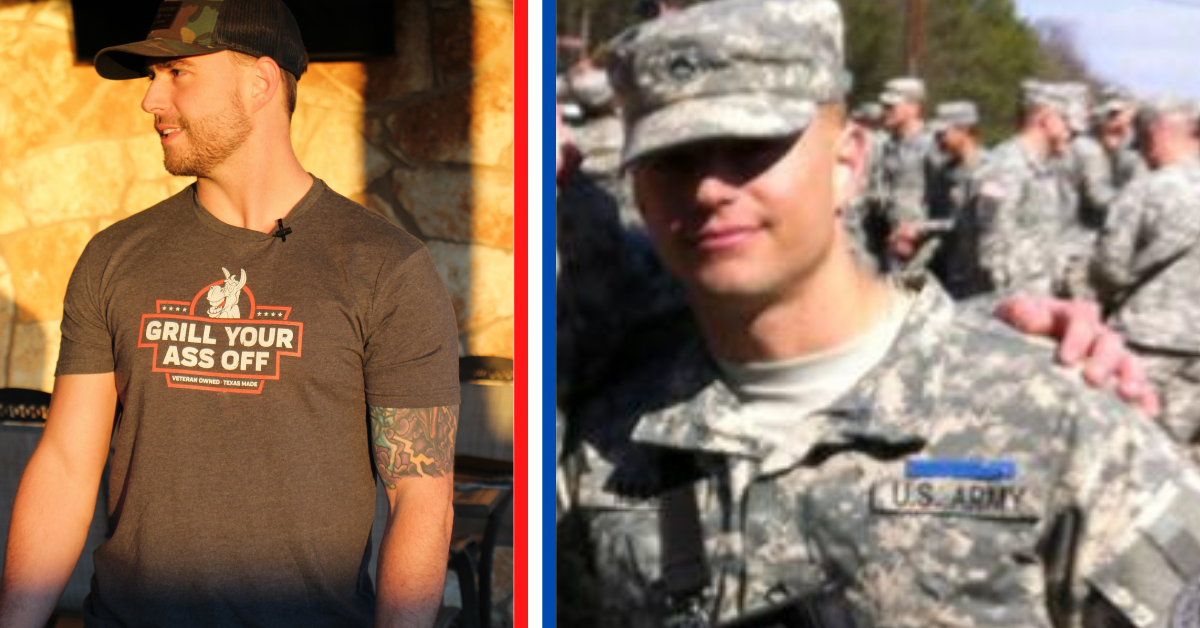 Jason Murff is all about the meat. But before building an epic kick-ass military-esque seasoning, rub and sauce business in his garage, he was a soldier.

“I grew up watching Band of Brothers and Saving Private Ryan. My grandfather was a pilot during the Vietnam War and he always had model helicopters around. Seeing things like that always drove me to want to serve. If you look in my 5th Grade yearbook it says I wanted to be the French fry guy and an Army Ranger,” he laughed.

Though the McDonalds fry guy may have faded from his goal list with adolescence – the military was a constant. But so was entrepreneurship; by the time he was 18-years-old, Murff owned two businesses.

“My first business was a diesel repair shop. I started that on the side and then I got into the performance aspect route. We were designing fuel systems, turbo kits, all this kind of crazy stuff,” he explained.

He also bought a firework business, quickly growing and scaling it. Things were looking good, until the market crashed and recession hit. “I was back to doing oil changes, suspension work,, things that I really didn’t care to do. And I really just hit a wall of burnout and loss of passion,” Murff said. “I started exploring a different route and what came to mind was like my childhood dream of going and being in the military.”

Throughout his childhood, Murff had been heavily involved in motocross racing. With a history of broken bones and all kinds of hardware inside him as a result – those around him told him he’d never make it.

He refused to let it stop him and quietly began the process of enlisting with the Army. “It took almost eight months for us to do all of the paperwork, process all my stuff and get medical clearance,” Murff said. He shut down his diesel shop and handed the reins of his firework business over to his sister to manage.

An avid athlete, Murff thrived in boot camp and found it to be everything he hoped for. He was finishing up Infantry School at Fort Benning when he received orders to the Old Guard, a voluntary assignment he absolutely did not volunteer for. “I went to my Drill Sergeant about it, explaining how I didn’t sign up for it but there was nothing he could do,” he said. “I did a bunch of really honorable things but it wasn’t what I joined the Infantry to do. I wanted to deploy and fight.”

Murff put his head down and dug into his role while also taking advantage of all the schools available to him as a soldier, many of which challenged him physically. This led to eating healthy and focusing on fitness while competing in physique competitions. “The food where I was was so bland and I kept asking my family to send me spices and seasonings from back home in Texas,” he shared.

Though he didn’t know it, this would begin his path to Grill Your Ass Off.

On a five-mile run with his unit he came off a curb wrong, tearing all the ligaments in his left ankle. “I spent the next eight months trying to find a doctor who would actually operate on me.” He finally found a doctor on Walter Reed. “They did the surgery on Fort Meade and ended up doing surgery in the wrong area of my leg,” Murff said. “Then I ended up spending the next few months popping from doctor to doctor and physical therapist or specialty person to try and re-figure out what was wrong.”

It would lead to a medical discharge.

“There were a lot of dark times because my whole goal had been to join the infantry and make it to Ranger school,” he admitted.

Murff transitioned out of the Army, moving to Waco, Texas, to attend an aircraft pilot training program. “Really quickly I discovered I am a very non-sedentary person and once the cool factor passed, it felt like I was driving a giant school bus in the sky. I have to be going all the time or I tend to lose my mind a bit,” he laughed.

Though he stayed plenty busy with school and revamping his still operating firework business, Murff continued “playing” with seasonings. All the while talking to his friends still serving, coming up with different ideas for tongue-in-cheek names for them all. He also connected with avid griller and first-responder James Kidwell, who is now the COO of the company.

“Everything that we do within the military is filled with humor and a lot of that is to combat all the dark things that we do or go through,” Murff explained. “We have gunpowder steak and brisket seasoning and it actually looks exactly like gunpowder. We have all of these things that whenever they pick it up, and they read that name, they instantly get a tie back to their time and service or a story that their grandpa or their dad told them.”

More than humor and military connection, it was important to him and the team to have purpose wrapped up in the mission of Grill Your Ass Off. “The goal is to be able to grow the business to be able to hire veterans, first responders and people that have given so much time and dedication to their country,” he said.

Murff is also big on giving back. A portion of every single purchase goes into a nonprofit which serves the military, veteran and or first responder communities.

Looking back, he has zero regrets. “I’ve been able to turn my military chapter over and start a new one. That’s what’s kept driving me forward throughout everything,” he added.

When he isn’t coming up with new blends, recipes and running Grill Your Ass off, you can find him speaking as an ambassador organizations like Chive Charities and Operation Resiliency.

“It’s hard, we’re talking about suicide and trauma. My biggest thing right now is just consistently communicating, especially as everything overseas draws down. I think there’s going to be a big shift in the veteran community – especially the veteran owned business ,” Murff said. “If you can’t think about the guys that you served with, especially the ones that paid the ultimate sacrifice, if you just can’t use that as a motivation to keep pushing forward then I don’t know what there is.”

Though he’s found undeniable entrepreneurial success since leaving the Army, it wasn’t easy and there were many naysayers. Even well-intending friends and family members would often ask him when he was going to get a “real job”.

“A lot of my initial drive was to just prove them wrong,” Murff said.

To get this veteran’s Grill Your Ass Off seasonings, sauces and gear, click here.